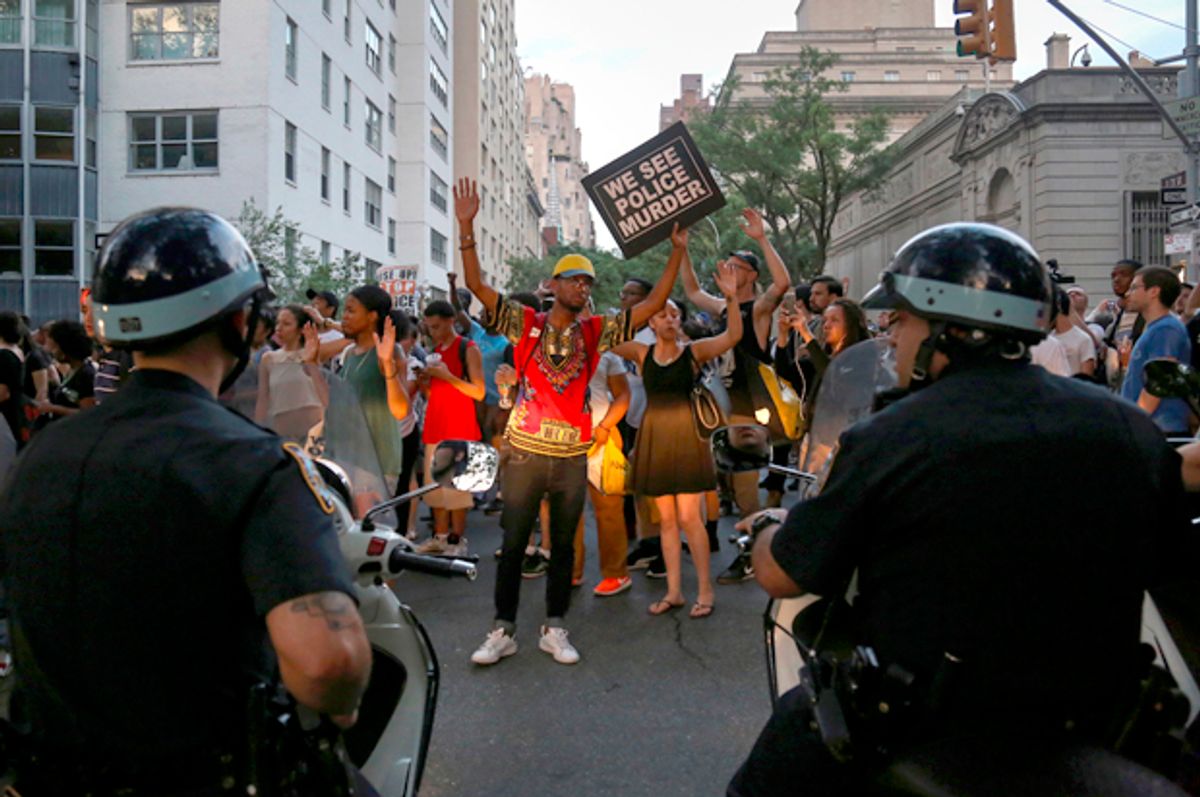 In the wake of the recent police shootings of Alton Sterling and Philando Castile, Asian-American activists are lending their voices to fight anti-Black narratives and saying loudly that yes, #BlackLivesMatter.

He was a "Chinese" man. That's how Philando Castile's girlfriend Diamond Reynolds identified the officer involved on the graphic live-streamed Facebook video of his death. The press has since identified Jeronimo Yanez as Hispanic, but Asian-Americans activists were concerned that the media would turn this officer into another Peter Liang, the New York City police officer convicted (and, some defenders argued, scapegoated) for shooting and killing an unarmed Black man named Akai Gurley. The Asian-American community found itself fractured over the verdict. The fact that Liang will not serve prison time despite being found guilty of manslaughter shows that police officers enjoy different rules than civilians. It also reveals the ways in which race can be used as a diversion to keep well-intentioned individuals from clearly seeing the workings of white institutionalism that are steadily corroding human rights and personal freedoms.

Increasingly, Asian Americans refuse to be used as a wedge group simultaneously propping up racist institutional systems that too often target Black men as victims (read the storifyed tweets by Jeff Yang here).  “It is too easy for us to be pitted against black and brown people as the Model Minority or even to just ignore current problems and be safe in the bubble of college-educated, suburban, professional, safe America,” notes blogger Grace Hwang Lynch, “not realizing what we are quietly sacrificing for this ‘comfort.’”

Crucially, the myth of the model minority obscures the struggles of working-class Asian Americans holding menial jobs who also face discrimination on socio-economic grounds. As blogger Jenn Fang writes, “Do we choose a society where the lives of Black and Brown people — including Black and Brown Asian Americans — has value? Or, do we continue to uphold a system that places no value in the lives of non-White people, including our own; and wherein only some can place their trust in our law enforcement?”

Alert to the reality that anti-Black narratives undermine solidarity among minority groups, young Asian Americans responded to the deaths of Alton Sterling and Philando Castile by putting together a crowdsourced open letter meant to explain #BlackLivesMatter to their traditionalist mothers, fathers, uncles, and aunties. Drafted by millennial Christina Xu, the letter has already been translated into dozens of languages including Punjabi, Benagli, and Urdu. The project, called “Letters for Black Lives,” went live this afternoon.

The fact that Jeronimo Yanez is not Chinese does not relieve Asian Americans of the moral and ethical responsibility of fighting for justice for Black lives, just as the fact that Yanez is Hispanic does not magically excuse white cops from being complicit in a system committed to preserving a racialized social hierarchy. Mere hours before Philando Castile died, Alton Sterling had been shot in the back by two white police officers, and 557 other individuals have been shot and killed by the police force this year. So far. Run by the Washington Post, the tally is live; the numbers rose as I watched. Numerically speaking, most of the victims (238) of police violence have been White, but Black Americans (123) and Natives are being disproportionately targeted at disproportionately high rates. Last year, the Washington Post's analysis of police shootings in 2015 showed that black men were seven times more likely than white men to die by police gunfire while unarmed. Looking at data from 1980-2012, ProPublica found that young Black men were 21 times more likely to be shot by the police than their white counterparts.

To some, these same studies prove that Black men are forcing the police to shoot them at higher rates because they are prone to greater violence. It is here that stereotypes regarding “quiet” and "submissive" Asian Americans can help shift perceptions when police blame their victims.

In my various run-ins with law enforcement as an excitable preacher’s daughter, I have learned what not to do. Don’t move until the officers explicitly tell you to. Don’t protest. Don’t ask questions. Don’t claim you know your rights. Don’t try to be helpful by showing them documents they’ve demanded. (You have to wait for them to tell you to get them.) Use your words, but only to answer direct questions, preferably sticking to Yes or No.  Don’t prattle on, because small talk makes cops think you’re nervous, and in cop-brain this means you’re hiding something. Try not to cry. It can be difficult when every action on their part is suffused with the assumption of your guilt, even if you’re just sitting in the park with a book, trying not to breathe more than your share of the free air. Race and gender may well account for the difference between getting singled out for harassment (small Asian woman), and being viewed as a threat to the social order (large Black man) that must be stopped by fatal means if necessary. However terrible it may feel, the first is a form of politically-sanctioned bullying. The latter is terrorism enacted against a specific community, whose abject dead bodies we now see practically every day on the news.

Over time, the asymmetrical imposition of state power on vulnerable bodies has imparted its lessons, and “good” Asian Americans are increasingly convinced that it’s impossible to be good enough to escape a hierarchical system that insists upon casting non-Whites as perpetually Other and alien. Real life means that we need police, and many officers are honorable people who do a tough and dangerous job. But respecting the work that individuals do doesn’t exempt the institution from criticism, and when power abets power, protecting wealth and property instead of serving the common cause of justice, you arrive quickly at a place where systemic abuse of the poor, the disenfranchised, and the powerless becomes the untenable new normal. Under the rubric of “public safety,” in too many sectors we’ve slowly allowed ourselves to become a police state where law enforcement is declaring itself immune from oversight, even as police interest groups actively undermine efforts to implement, as The Washington Post writes, "policy that would make it more difficult for police to kill people and get away with it.”

This is not only unhealthy for an ostensibly free and democratic society, it destroys all trust between law enforcement and their communities. That trust is the boundary between civilization and carnage. Asian Americans are a large, diverse, and increasingly politically conscious group. Standing in solidarity, this group is now saying in unison: Black Lives Matter.