The young people will save us: My experience marching with Black Lives Matter in Chicago

If what I saw and experienced firsthand is any indication, America's youth holds the answer to racial tension 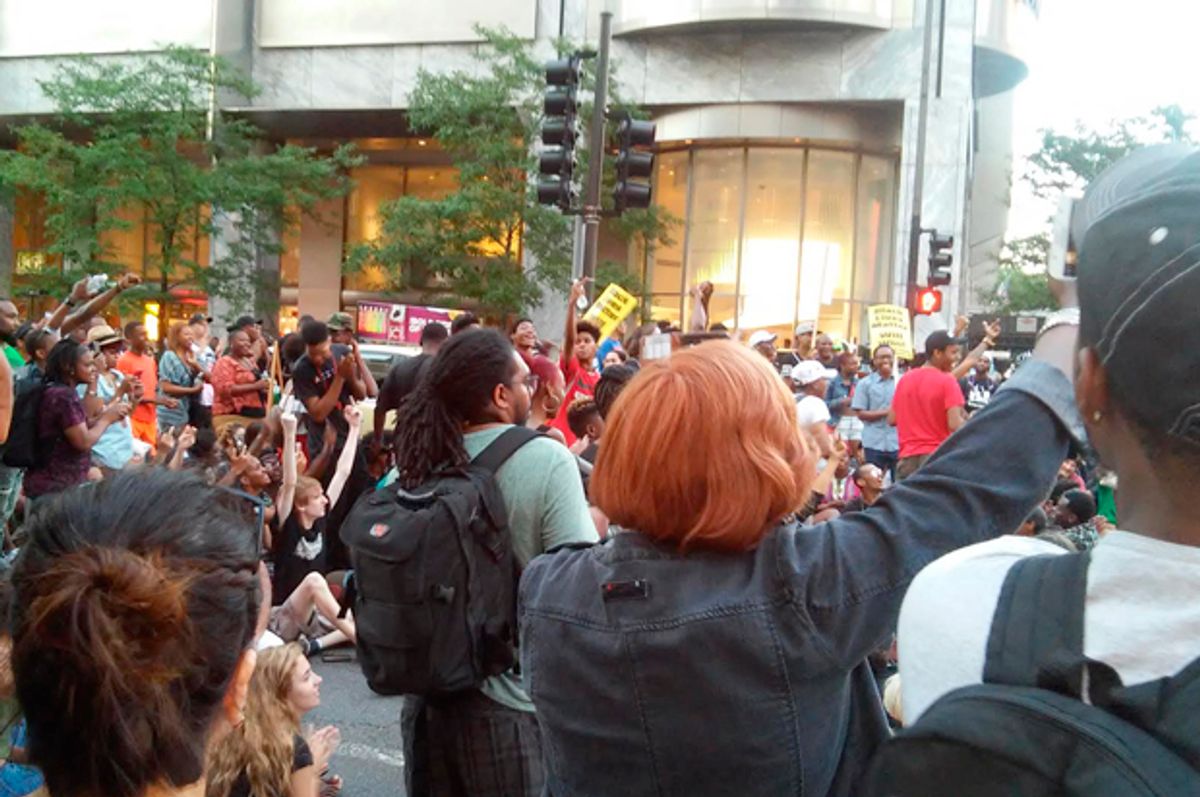 Several months ago, I personally experienced the worst of democracy at Donald Trump’s “no-show” rally in Chicago, when the raw passion, racism, bigotry, and violence he encourages among his supporters almost caused a riot at the University of Illinois at Chicago Pavilion.

On Saturday, I experienced some of the best aspects of democracy as I marched in the streets of downtown Chicago with members of Black Lives Matter and their allies who were protesting police brutality against people of color.

Unlike the faux populism channeled by the proto-fascist Donald Trump, the march was inclusive: it included black, white, brown, straight, gay, old, young, poor, and working class people. There were lifelong and trained activists in the group, but the march also swept up casual observers who joined when asked, “Do black lives matter to you?”

The marchers chanted the names of Alton Sterling and Philando Castile while demanding that America’s police stop violating the human rights of black and brown people. They blocked major intersections, tried to outmaneuver the police, and conducted sit-ins and teach-ins to maintain their morale and to educate those bystanders who were willing to listen.

When citizens exercise their rights of free speech and assembly in such a manner they are confronting State power. This is a crucible that reveals fundamental questions about the nature of American society and politics.

There were black children and families marching together at an event which could have easily descended into violence and chaos if the Chicago police decided to unleash their clubs, tear gas, or use other more extreme measures.

Should children be involved in political protests? This is an old question that harkens back to the debates almost six decades ago between the noted political philosopher Hannah Arendt and Dr. Martin Luther King Junior.

Unlike Arendt, Dr. King understood that black children in America do not have the pleasure of racial innocence in America; they live in a society that views them as adults because of the color of their skin. The parents of black children know this. As such, they prepare their children for the world as it is while simultaneously offering hope about how the world can perhaps be improved in the future.

In the United States, black people, especially black youth and women, are stereotyped as undisciplined and lacking impulse control. This is especially true of the black “ghetto underclass”. The Black Lives Matter protesters in Chicago gutted those stereotypes, laid them bare, exposing them as lies. They were disciplined, coordinated, and knowledgeable about their rights as citizens.

And when there were moments of potential violence or unruly behavior by those black and brown young folks and others who are righteous in their anger about oppression and police thuggery, other marchers calmed them down. This is the self-regulating behavior and discipline that a legion of sociologists, social workers, and policy elites have argued for decades that “ghetto youth” are supposedly incapable of.

Political marches are a type of street theater that provides opportunities for social interactions (and confrontations) which may otherwise not occur.

On Saturday, I watched a college-aged white woman repeatedly ask other white folks to confront their white privilege and if they want to be complicit with the police killings of black men like Alton Sterling and Philando Castile.

Black young people asked black police officers, “How can you be part of an organization that is racist against people who look like you?” Latino youth asked the same questions of police whose uniforms displayed last names like “Martinez”, “Gutierrez”, or “Cantero”. The police stood mute. Several of them looked embarrassed.

A young black woman asked an African-American police supervisor, “Do you believe that black lives matter?” The officer resolutely replied that he protects all people, of every racial background, equally.

A high-school aged black girl asked a white police sergeant in his late fifties if he had “ever killed anyone” and “why do the police kill black people?” The two of them walked together for several blocks as the officer explained that he has never killed anyone, but he had actually saved four people’s lives during his twenty-five year career.

When repeatedly asked by the marchers, “If it is only a few cops that are ‘rotten apples’ then why not turn them in to protect your reputations?” the police looked extremely uncomfortable and disturbed. The fundamental truth of that statement seemed to have caused them to experience a moment of cognitive dissonance.

The racist slogan “All Lives Matter” made an appearance on several occasions during the long Saturday march as well. In the era of Black Lives Matter such language is omnipresent. But some white folks use this slogan unreflectively. To wit: I watched a white woman in her late thirties, a psychologist by training, dialogue with a group of young black men about “All Lives Matter” before realizing, that yes, if all lives do in fact matter, then she should join the protest march. “Black Lives Matter” had won a convert.

There were also moments of playfulness and humor between the police and protesters. A black man and a white cop engaged in a staring contest before they started laughing and talking to each other. A police officer and his friends flirted with a devastatingly beautiful young woman who was standing next to me. She maintained her poise and stood defiantly against them. They, futilely, continued to try to earn her good graces. Several women, who likely raided their mother’s (or grandmother’s) closet had flowers in their hair and wore clothes that would have not been out of place at Woodstock in 1969. The women petted and kissed the police horses that loomed over the crowd. The horses seemed to like the kind attention.

But as I watched those mostly positive and benign encounters between strangers, I never forgot that Chicago’s police are notoriously violent, unprofessional, and corrupt. They shot Laquan McDonald 16 times without just cause. An internal investigation described Chicago’s police department as having “no regard for the sanctity of life when it comes to people of color”. This is the type of tyrannical power that the Black Lives Matter movement and other groups are confronting.

I looked into the eyes of police officers who are not used to being defied. A few were too quick to grab their clubs in anticipation of bludgeoning an unfortunate protester. Some officers smiled derisively at marchers who asked them questions. A few cops told black and brown protesters to “go back to the ghetto”. These were bullies, who, for a moment, were neutered. They are very dangerous people whose behavior was restrained only by the ubiquity of the video cameras among the crowd.

The protest would eventually end, the police made some arrests, and the Black Lives Matter marchers and their allies dispersed. The police radios cried out with reports of shootings and guns from neighborhoods around the city. The cops would speed off into the night from the riches of downtown Chicago to the South and West sides of one of the most class and race segregated cities in the United States.

The recent days and months have been difficult for Americans. Last week a series of video-recorded killings of black men by white police sparked protests across the country. The week would climax with an attack by a lone gunman on a peaceful march in Dallas, Texas which left 5 police officers dead.

As embodied by Donald Trump, the 2016 Republican presidential race is an ugly reminder of how authoritarianism, fascism, racism, xenophobia, and bigotry are enduring forces in America. Moreover, the country’s political institutions are dysfunctional. They have been broken by extreme political polarization (caused by the Republican Party) and the corrupting power of money and private interests.

Despite what recent hyperbole-tinged news headlines would like to suggest, America in 2016 is not the America of the 1960s. There is no Vietnam War. Bobby, Malcolm, John, and Martin have not been assassinated in quick succession. Detroit, Chicago, and Watts are not under internal siege by urban rebellions. Yes, the United States and its people have recently suffered some wounds. But the country is not convulsing, the body politic tearing itself apart as it writhes in agony.

If what I saw and experienced firsthand on Saturday is any indication, it is America’s young people who may save us all…if we just give them a little help and also know when to get out of the way.