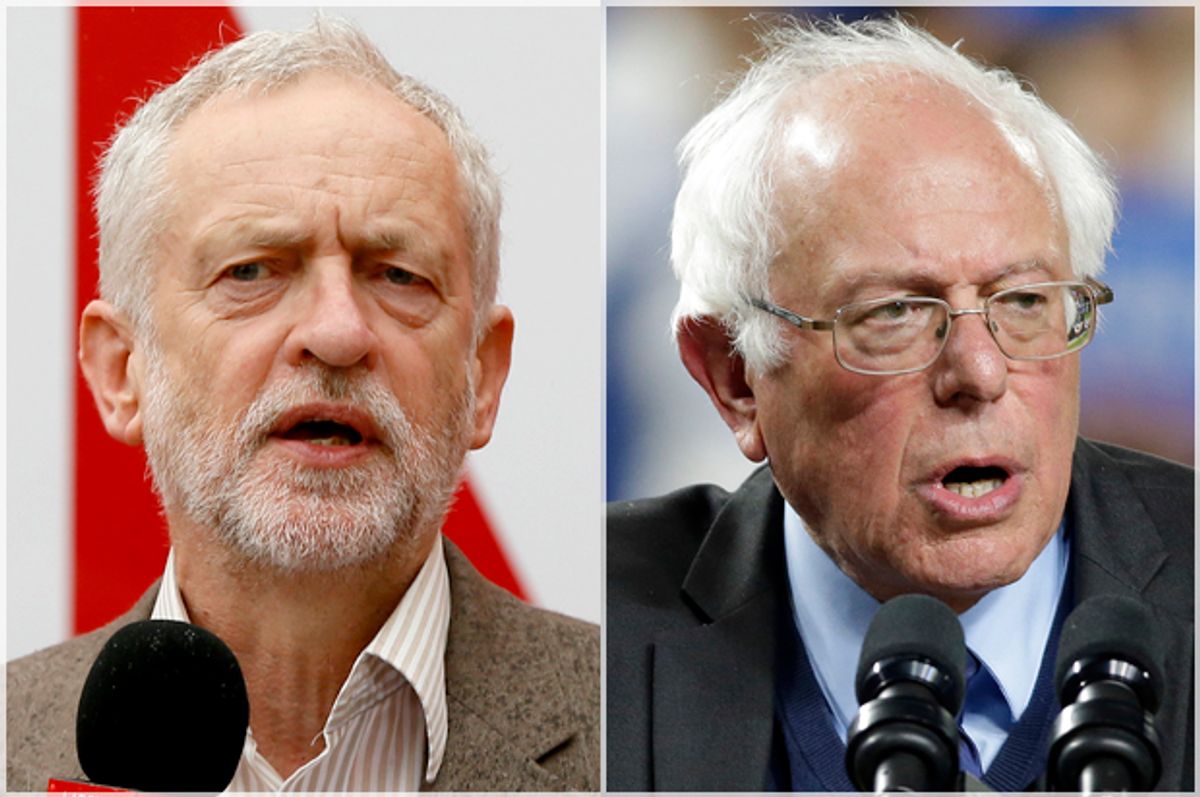 Comparisons between Bernie Sanders and Jeremy Corbyn are nothing new.  Both are idiosyncratic, outsider social democrats—“grumpy old socialists” some say — who've risen to prominence representing popular views abandoned by elites, particularly elites of the institutional center-left parties in each of their countries. Both were seen as fringe candidates when they first stepped forward last year and elites just can't wait to re-marginalize them again — but that may not be so easy, both because of who they are and because of what they represent.

Comparisons first kicked into gear when Corbyn won election as Labour leader, naturally gaining Sanders' congratulation, though naysayers were commonplace, even then. Then, when Sanders won the New Hampshire primary, comparisons intensified—their supporters, for one thing, were strikingly similar.  There were dissenting voices, but the broad similarities were so striking that even Tony Blair couldn't help but notice them, professing bafflement, leading Guardian commentator Deborah Orr to respond:

Tony Blair says he is “baffled” by the rise of Jeremy Corbyn and Bernie Sanders because of “the question of electability”. For him, these choices are simply not pragmatic. No matter what fine ideas candidates may espouse, for Blair the key matter is whether they can achieve power. Not that he thinks Corbyn and Sanders are exactly brimming with fine ideas: “Free tuition fees: well, that’s great,” he says. “But someone’s going to have pay for it.”

But the answer, of course, is obvious. Pragmatism itself doesn’t seem terribly pragmatic any longer. Pragmatism, as practised by Blair, ended in disaster, despite the supposed cleverness of its compromises.

The same could be said of Clintonian pragmatism as well. But Hillary Clinton has been pragmatic enough to move left in response to Sanders—a process that's continued even after she was declared the presumptive nominee, and Sanders had supposedly squandered his chance to have any influence.

Corbyn, too, was supposedly washed up after the Brexit vote.  He lost a no-confidence vote among Labour members of parliament, 172-40, and the only questions were how he would leave, and who would replace.  Yet simultaneously, the leading candidate to replace him, Angela Eagle, was embarrassed when her local Labour Party opposed the no-confidence vote. More broadly, Labour membership surged massively by 100,000 in support of Corbyn, as he issued a defiant message, reaffirming his commitment to traditional Labour Party principles and the people who supported him, and the coup plotters admitted defeat:

One senior MP told The Telegraph: "It's finished. He will win easily in a second contest if he is on the ballot, it's everything we wanted to avoid."

Democracy!  It's such a bother!

Here in America, elite commentators were puzzled, if not dismissive, when Sanders focused on fighting for the platform to reflect his goals. Who pays any attention to platforms, anyway? But Sanders saw elite contempt for the platform as yet another elite blind-spot, a weak-point to be turned to his advantage. Platforms are only irrelevant if there's no one there to hold party leaders accountable. To make sure there is someone there, one has to wage a fight on their behalf—precisely what Sanders has done, sustaining his call for a political revolution.  The results have been impressive, as Steve Bennen noted:

The document, which is available in its entirety, is surprising in its audacity on everything from free community college to expanding Social Security, overturning Citizens United to banning assault weapons, criminal justice reform to repealing the Hyde Amendment that prevents public funding of abortion.

There can be little doubt that many of these provisions and more – reforming the carried-interest loophole, postal banking, the industry ties of Federal Reserve board members – can be attributed directly to the Sanders campaign’s role in negotiating the terms of the platform. The senator and his team made a concerted effort to move the document to the left, and they achieved their goals in dramatic fashion.

Everyone expects Clinton's campaign to move back toward the center—and Sanders lost some key votes after Bennen, most notably on trade. But the Sanders team has altered the dynamics—perhaps permanently. They have laid out markers—and gotten them accepted by the party — that will provide rallying points for moving left, not right, in future situations.   And if that's what's already written in the platform, it will further encourage folks to continue thinking farther and farther outside the “pragmatic” box.

It's not limited to the platform. Clinton herself recently announced a significant shift in her higher education policy, including “eliminating tuition at in-state public universities for families making under $125,000 by 2021.”  As political scientist Corey Robin argued, though still imperfect (“ I think means-testing higher ed makes about as much sense as means-testing Social Security or elementary school”) it represents a significant advancement:

Way beyond anything between Clinton v. Sanders, this plan by Clinton is something that can, potentially, change the way people think about their taxes and what the state can do for them. It’s a step toward a political and ideological realignment.

But also, a potential change in way people think about their own power:

[I]t could help change our sense of where power lies. It could help more people see what the good activist and the smart organizer already sees: that if we could just possibly get our shit together, we might, sometimes, find power elsewhere. Not power in the abstract, but power to change the concrete terms and conditions of our daily lives.

This is precisely what Bernie Sanders means by a political revolution. And for all the shortcomings one still sees in Clinton's plan, this significant shift towards his position  validates him even more powerfully at this more fundamental level.

Yes, Sanders and Corbyn are unlikely leaders, precisely because the entire elite leadership structures have lost their way, leaving a void that only unlikely outsiders could fill.  The elite dysfunction that gave rise to them isn't going away, even if they could get rid of Sanders and Corbyn overnight. But the mass desire for a functioning democracy — one that actually meets people's needs — isn't going anywhere either. That's the real significance of Sanders and Corbyn—they've helped rekindle that desire.