With friends like these: More reasons why LGBT people should fear a Donald Trump presidency

With Michele Bachmann advising & Mike Pence as VP, a Trump presidency could be worse for LGBT people than Reagan's 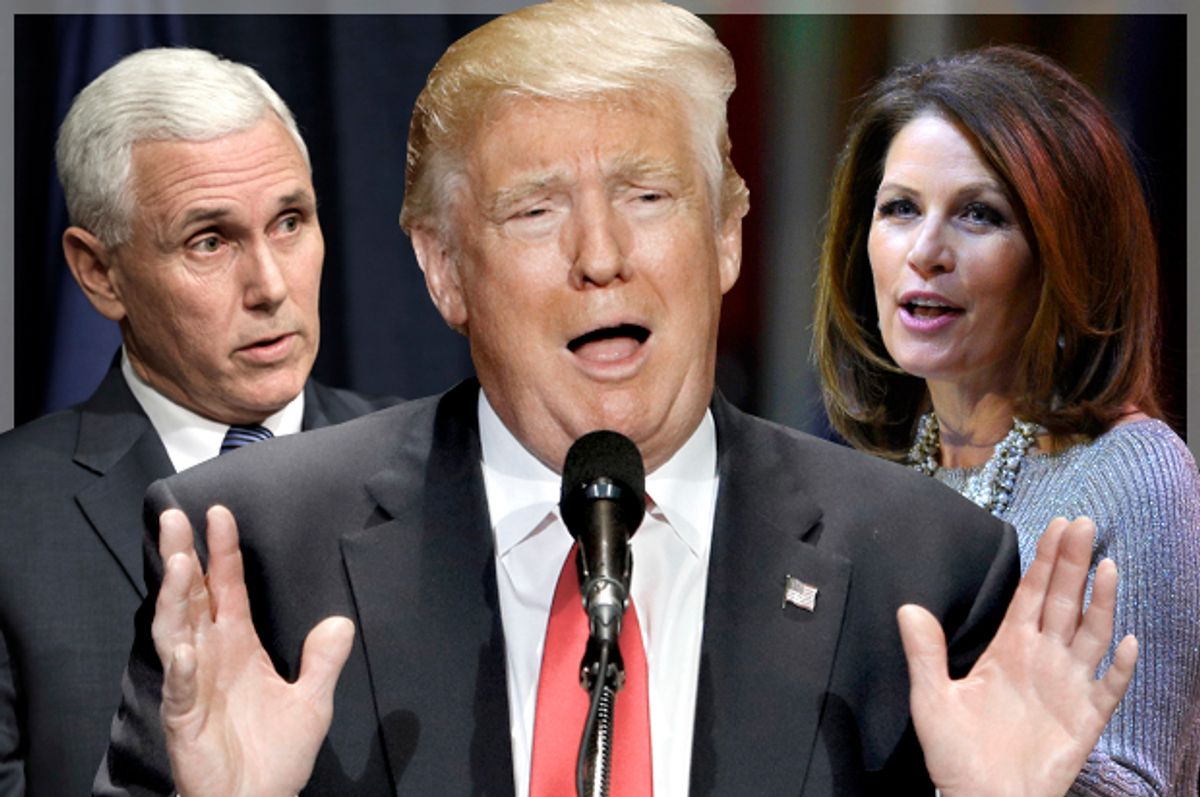 For someone who claims to be a “friend to the gays,” Donald Trump sure does like to hang around with homophobes.

Since the Pulse nightclub shooting in Orlando, which claimed the lives of 49 people, Trump has been repeatedly trying to sell himself as an ally to the LGBT community—or at least better than Hillary Clinton on gay rights. “The LGBT community, the gay community, the lesbian community—they are so much in favor of what I've been saying over the last three or four days," Trump famously claimed at a Houston rally in June. “Ask the gays what they think and what they do, in, not only Saudi Arabia, but many of these countries, and then you tell me: Who's your friend, Donald Trump or Hillary Clinton?”

Trump, who has criticized the Clintons Foundation’s decision to accept donations from countries with a poor LGBT rights record (even while having business ties to many of the same nations), later reiterated the same point on Twitter. “Thank you to the LGBT community!” he wrote. “I will fight for you while Hillary brings in more people that will threaten your freedoms and beliefs."

But while publicly courting the votes of LGBT Republicans like Caitlyn Jenner, who recently had a “supportive” call with the billionaire CEO, he has aligned himself with extreme anti-gay factions of the right wing in private. The businessman has been referred to as a “moderate” on the subject of gay rights, with even the New York Times crediting his “more accepting views” on the LGBT community, but if a politician is to be judged by the company he keeps, a Trump presidency stands to be the most brutal assault on the dignity of queer people since Reagan’s.

Ronald Reagan and Donald Trump have a great deal in common. They are two men who don’t fit the traditional image of what a president looks like. Reagan was a well-known actor before he was a politician, while Trump—the son of a businessman—was born into the world of finance, the embodiment of 1980s Wall Street excess (he may as well be ripped out of “Bonfire of the Vanities”). Before their campaigns proved popular with a great number of Americans, these men’s political ambitions were considered a joke: After all, who would ever vote for a celebrity for president?

But most importantly, Reagan was reportedly a moderate on gay rights in private. During his time as the governor of California, Reagan opposed a ban on LGBT people teaching in public schools. In 1984, the Reagan Administration was the first presidency to host a gay couple in the White House—when Ronald and Nancy Reagan’s interior decorator, Ted Graber, stayed over in the Reagans' private quarters with his partner, Archie Case. “Indeed, all the available evidence suggests that Ronald Reagan is a closet tolerant,” concluded the Washington Post.

But if his opposition to gay rights was merely “for political purposes,” as the paper suggested, the end result was no different: Thousands of queer people died in the streets during the 1980s while the White House refused to acknowledge them. Ronald Reagan wouldn’t publicly say the word “AIDS” until 1985—four years after the New York Times first reported the outbreak of a “rare cancer seen in 41 homosexuals.” When the administration was first asked about the disease (referred to by reporter Lester Kinsolving as the “gay plague”) on Oct. 15, 1982, Reagan’s press secretary laughed at the question.

It makes sense that as someone who came up through the Hollywood system, Ronald Reagan would have colleagues and acquaintances who were gay, but Reagan’s private tolerance did not translate into public advocacy. 20,849 people died from AIDS during his four years of silence, including the another of the Reagans’ gay friends, closeted actor Rock Hudson.

If Reagan’s personal views on LGBT people were a product of the liberal culture of Hollywood, Trump’s are likely a result of his business background. “Trump has spent his adult life in the upper echelon of New York high society, slithering between the ritzy business world and the gilded social scene,” writes Slate’s Mark Joseph Stern. “He has undoubtedly interacted extensively with gay people and maybe even counts a few as friends. He is well-educated and not very religious. Donald Trump simply has no reason to be homophobic.”

Before running for president, Trump has supported legal recognition for same-sex domestic partners, amending the Civil Rights Act of 1964 to include LGBT people, and the repeal of “Don’t Ask, Don’t Tell.” His 2000 book, “The America We Deserve,” further hinted at the need for nondiscrimination protections in the workplace to protect LGBT employees.

“I want to do everything possible to see that regular Americans can enjoy the same opportunity for success and security that I have had,” he wrote. “That means the American Dream unencumbered by bureaucratic ineptitude, government regulation, confiscatory tax policies, racism, discrimination against women, or discrimination against people based on sexual orientation. We all must have equal access to the American Dream. It’s a dream we deserve and a dream worth fighting for.”

But since ramping up his ambitions for the presidency, Trump has repeatedly rolled back those views. Back in 2011, the CEO came out against same-sex unions in an interview with the Des Moines Register. “I’m not in favor of gay marriage,” he said. “They should not be able to marry. ... I just don’t feel good about it.” He recently reiterated those views to Fox News’ Chris Wallace, promising that, if elected, he would appoint Supreme Court justices who would overturn the 2015 ruling on marriage equality. “I would be very strong on putting certain judges on the bench that maybe could change things,” he said.

To Republicans unconvinced by his change of his heart, Donald Trump offered the following words during a February sitdown with Pat Robertson’s Christian Broadcasting Network: “Trust me.”

Trump, though, has had extraordinary difficulty getting many conservatives to do just that. Since launching his campaign last year, he has fought not only criticism of his stance on LGBT issues but also conspiracy theories that he’s a secret Democrat. Critics suggest that he’s a plant from the Clinton camp, sent on a mission to derail the GOP primaries. Former White House hopeful Jeb Bush added fuel to that fire when he tweeted last December: “Maybe Donald negotiated a deal with his buddy Hillary Clinton. Continuing this path will put her in the White House.”

Trump did not help his case when rumors most recently swirled that he was considering retired Lt. Gen. Michael T. Flynn for the vice presidential slot on his campaign ticket. Flynn is a registered Democrat.

But oddsmakers have their money on another contender, and it’s not Newt Gingrich. Reports suggest that Trump is close to tapping Indiana Gov. Mike Pence, with one-time Trump adviser Michael Caputo telling the Indianapolis Star last week that the choice is all but a done deal. "The Republican Party has a deep bench of qualified vice presidential candidates," he said. “Some ring certain bells, and others ring other bells. I think Mike Pence rings the most bells of all.”

If Pence’s name sounds the alarm for LGBT people, it’s because Pence was behind the Religious Freedom Restoration Act, the 2015 religious liberty laws that allowed businesses to discriminate against customers based on their gender identity or sexual orientation. That means, for example, that if a caterer wanted to deny its services to a same-sex couple's wedding, he could legally do so under RFRA. (Remember the "homophobic pizzeria?") After a corporate boycott that cost the state $60 million, the law was “fixed” just months after it was passed.

That bill proved a tipping point for anti-LGBT legislation. Around the time of its passage, 28 states introduced laws targeting queer people—including Georgia, Missouri, and Texas—and many of these pieces of legislation were markedly similar to the Religious Freedom Restoration Act. Just a week after HB 2 was signed into law, Mississippi passed its own “religious liberty” bill, known as House Bill 1523. HB 1523 was recently struck down following a federal court ruling, but as of April, over 100 anti-LGBT bills were still under consideration by state legislatures.

Given a national platform, Pence could do immeasurable harm to queer and transgender people, but he is only one of many destructive forces with whom Trump has threatened to align himself.

In June, Trump announced the formation of his religious advisory board, which amounted to a Justice League of anti-gay hate. Appointees included Michelle Bachmann, James Dobson, Richard Land, Harry Jackson, Ronnie Floyd, James Robison, and Robert Jeffress. Bachmann, who ran for president in 2012, operates a clinic with her husband that practices gay conversion therapy, while Dobson is the head of Focus on the Family, the longtime anti-gay lobby group.

Other names may be less familiar to you, but they should be no less concerning. Land, president of Southern Evangelical Seminary, said that the “dirty little secret” of the gay community is that a “high percentage of adult male homosexuals in America were sexually molested when they were children.” Jackson, who serves as a  Pentecostal bishop, has called homosexuality “walking pneumonia.” Floyd, president of the Southern Baptist Convention, has said that ministers should refuse to officiate same-sex weddings. Robison, a televangelist, called same-sex partnerships an “assault not only on truth, natural acts, and marriage, but an attack on the very possibility that God gave His creation a reliable standard to follow."

Jeffress, though, has been particularly virulent in his condemnation of LGBT people. The evangelical pastor, who is the host of TV’s “Pathway to Victory,” has claimed that acceptance of homosexuality “will pave the way for that future world dictator, the Antichrist.” Jeffress has also called long-term gay relationships a “myth,” likened same-sex intercourse to pedophilia and beastiality, and erroneously claimed that 70 percent of gay men have AIDS.

If that’s not enough, he stole copies of LGBT-inclusive parenting books from the Wichita Falls, Texas, library in 1998, vowing to never give them back. And this is the guy who is not only a whisper away from the likely GOP presidential candidate but also posed for a cheerful photo of the two men flashing a thumbs up. (Trump even retweeted it.)

For Mr. Trump, who also has been holding behind closed doors meetings with noted anti-gay figures like Pat Robertson, E.W. Jackson and Tony Perkins, kowtowing to the interests of homophobic extremists is not merely lip service. The CEO’s policies on the gay community have notably shifted to the far right in recent months. After initially wagging his finger at HB 2, he now claims he supports the bill. Trump is also in favor of the “First Amendment Defense Act,” a bill that, according to the Human Rights Campaign, would “enable Kim Davis-style discrimination against LGBT people nationwide.”

Most powerfully, he pointed out on a "Face the Nation" appearance earlier in the year how easily an incoming president could reverse every single executive order made by the previous administration on the first day in office. For Trump, that could mean "un-signing," as he says, an Obama executive order preventing the federal government from hiring contractors that discriminate against workers based on their sexual orientation or gender identity. That sounds very different than the man who once envisioned a country free of identity-based discrimination.

If voters back Trump in November, LGBT people won’t get the America we deserve, as Trump effusively promised in his 2000 manifesto. We will get the America of 35 years ago.