"I am proud to stand with her today": Bernie Sanders makes it official, finally endorses Hillary Clinton 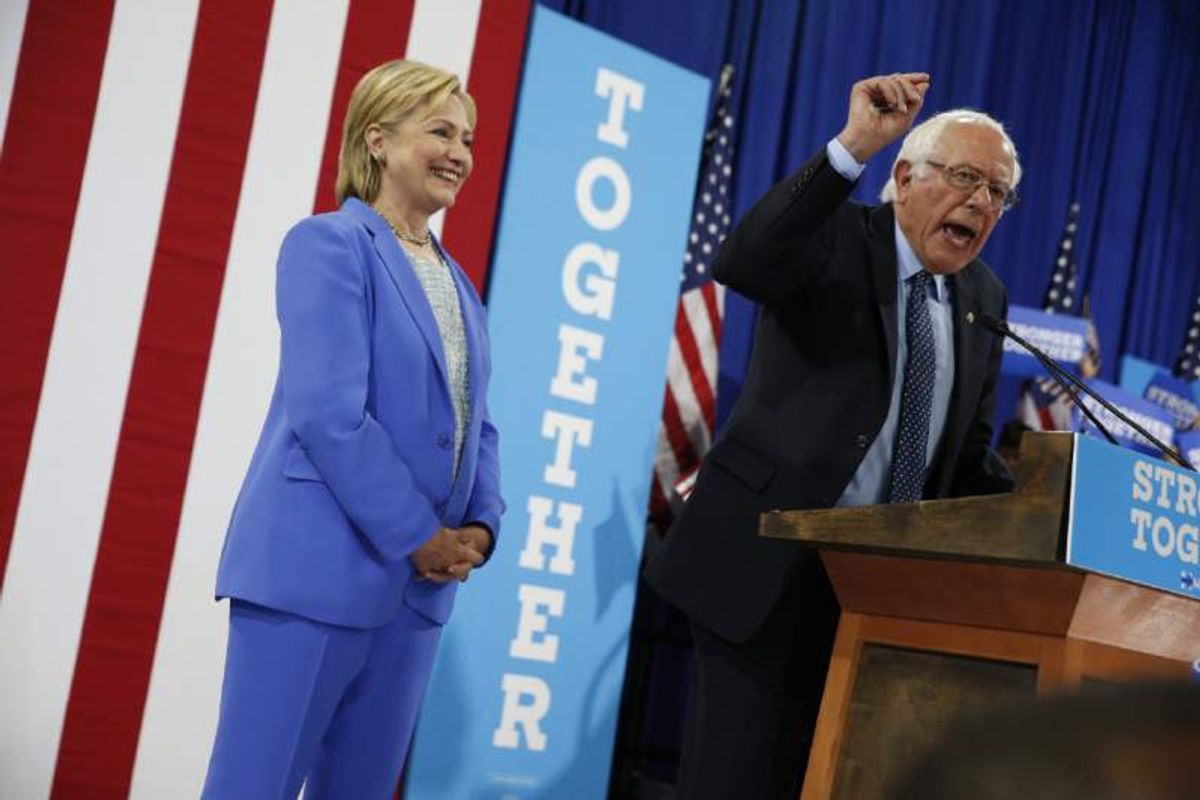 More than a month after securing enough delegates to become the presumptive Democratic presidential nominee, Hillary Clinton finally received the biggest endorsement of this cycle.

"Secretary Clinton has won the Democratic nominating process and I congratulate her for that," Bernie Sanders declared on Tuesday, standing besides his beaming former rival. "I have come here to make it as clear as possible as to why I am endorsing Hillary Clinton."

While not quite as symbolic as her first joint appearance with one-time rival Barack Obama in Unity, New Hampshire, after the 2008 Democratic primary, Clinton finally saw her long-awaited unification with Sanders in the Granite State Tuesday. The endorsement comes two weeks before the start of the 2016 Democratic National Convention in Philadelphia.

"I intend to do everything I can to make certain she will be the next president of the United States," Sanders told a cheering crowd at a joint rally of both Clinton and Sanders supporters in Portsmouth. Sanders, the Independent senator from neighboring Vermont, defeated Clinton by a wide margin in New Hampshire, the nation's first primary.

While many of Trump's primary challengers have yet to endorse him, Clinton has enjoyed the support of Democratic heavyweights like President Obama, Massachusetts Senator Elizabeth Warren and Joe Biden on the campaign trail. Her surprisingly competitive upstart challenger, however, has been reluctant to publicly push her campaign until today.

"Hillary Clinton will make an outstanding president and I am proud to stand with her here today," he boomed. "Together we have begun a political revolution to transform America, and that revolution continues."

“Hillary Clinton believes that we must substantially lower student debt, and that we must make public colleges and universities tuition free for the middle class and working families of this country,” he assured his hesitant supporters, lauding his campaign's achievements pushing Clinton to the left.  "I am happy to tell you that...we produced by far the most Progressive platform [in history]."

"I learned that this campaign is not about Clinton, Trump, or Sanders...[it's] about the needs of the American people," he continued. "This is about moving the U.S. towards universal health care."

Tuesday's event is the result of of weeks of conversations and hard fought negotiations between Clinton campaign manager and Sanders top adviser Jeff Weaver, according to CNN:

Mook also began working directly with Jane Sanders, the senator's wife, in the lead up to policy Clinton's announcements on college affordability and healthcare that moved her closer to Sanders' positions.

But most of the work was done even before Clinton clinched the nomination. During the primary she reversed her position on issues of massive importance to the progressive grassroots like the Trans-Pacific Partnership trade deal and the Keystone XL Pipeline. Over the weekend, the Democratic platform committee voted to incorporate major Sanders campaign initiatives like a national $15 minimum wage and tuition-free higher eduction.

The Clinton campaign has also worked hard to court reluctant Sanders backers in battleground states he won during the primary or where they fought in especially contentious contests. From CNN:

But despite her concessions, a new poll from the Associated Press and University of Chicago of 18- to 30-year-olds, Clinton bests Trump 38 to 17 percent. But that leaves 45 percent of those young adults who said they were either undecided, wouldn't vote or would vote for someone else (22 percent). Currently, in Trump-Clinton polling match-ups, the two major-party candidates together regularly get the support of only around 80 percent of registered voters.

It's possible that the Sanders endorsement could help Clinton get part of that remaining 20 percent.

"I'm Bernie or Bust," Marie Clark, a Sanders supporter from Laconia, New Hampshire, at the rally Tuesday told CNN. Clark said she plans to write-in Sanders in November despite his endorsement of Clinton. "I think people need to vote for something rather than against something."

"I would follow Bernie to the ends of the earth, but I will never follow him to Hillary," another so-called Bernie or Buster present for Sanders' endorsement of Clinton Tuesday told CNN. "I'm not voting for Trump, I will write Bernie in. It doesn't matter what he says," Vermont Sanders supporter Patty Covino explained. The ardent Sanders supporter drove miles for Tuesday's event in order to hold up a sign that read: "Only Bernie."

Still, Sanders supporters have flocked to Clinton's campaign faster in 2016 than Clinton supporters joined Obama’s side in 2008 when just 69 percent of Clinton backers said they would support Obama, according to a recent Pew survey.