Wednesday's season 2 premiere starts to fill in some of the show's mysteries in the same riveting, confident form 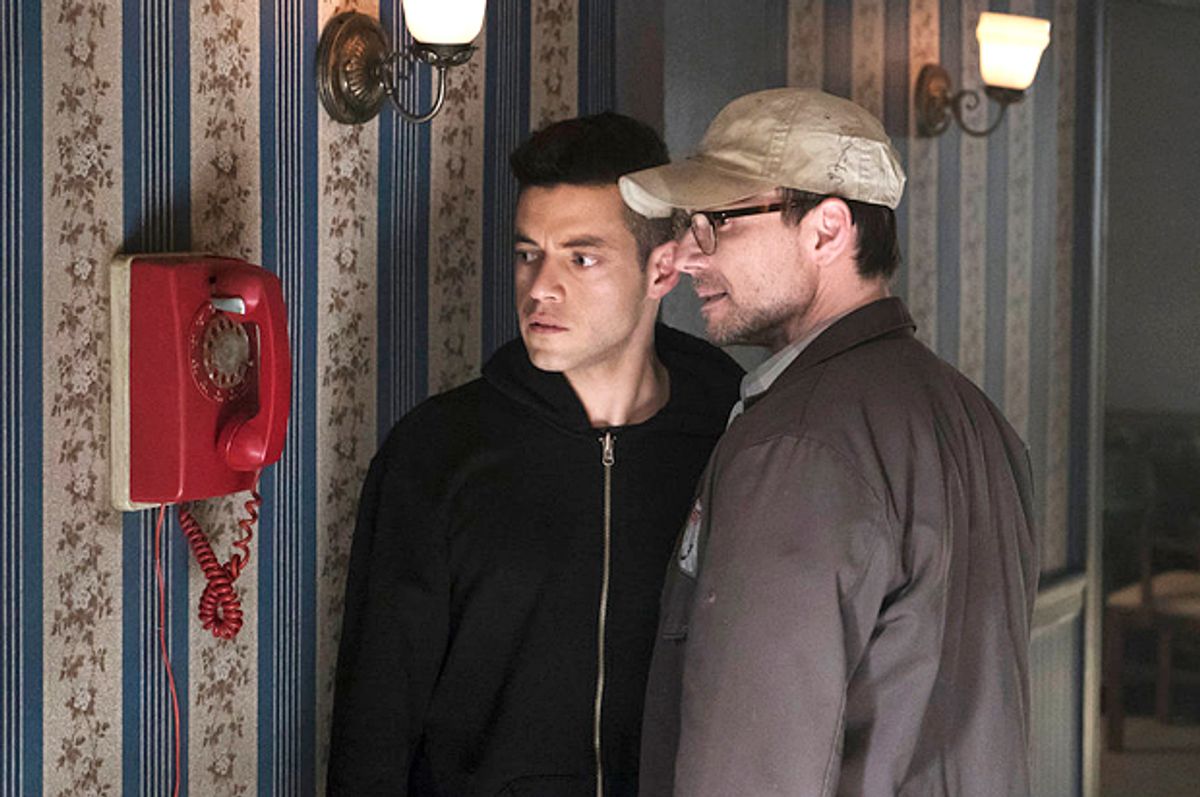 The opening season of “Mr. Robot” was a rare example of prestige television that was not just edgy but also genuinely radical: It made a critique of capitalism during the Internet age into a gripping storyline — on USA, no less, former home of action romps like "Burn Notice." Blending Philip K. Dick with Naomi Klein, “Fight Club” with Thomas Piketty, “V is for Vendetta” with the speeches of Bernie Sanders, Edward Snowden with “The Matrix,” the show built an argument about the hollowness of 21th century reality and how financial elites manipulate us to make it seem otherwise. And “Mr. Robot” did it with stylish shooting, consistently strong acting (especially from break-out star Rami Malek, the self-proclaimed vigilante hacker Elliott), and eerie, evocative music.

This was a lot for a 10-episode series to capture – some of it felt breathless — and it would be easy to imagine the second season struggling to keep up the momentum. But the first half of season two’s opening episode — the only part that USA has made available to Salon, which also "leaked" across social media over the weekend — is every bit as taut and brilliant as the first season. The cutting isn’t quite as quick as in the early episodes of season one — this season may be driven more by despair than anxiety, and the storytelling takes its time here. But the quality level is just as impressive.

Elliott, once a lowly tech whose efforts fed the evil of E Corp, no longer toils for the one percent’s one percent. He’s helped collapse the nation’s financial markets, and has discovered that the anarchist ring-leader played by Christian Slater is both his father and a figment of his imagination. Elliott is trying to get his head back on by eating most of his meals with the same “Seinfeld”-obsessed friend, opening up to a therapist who is rightly wary of him, attending a regular church group, watching basketball, and living with his mother, where he doesn’t have access to a computer. The backstory of his childhood injury — being pushed out of the window by his father — is filled in through a flashback.

And that, since the episode doesn’t air until Wednesday, is all I’ll say about the plot for now.

What I will say: Despite what we’ve learned about Slater’s character, he still shows up to confuse Elliott about what is and isn’t happening. (Given how unreliable a narrator Elliott is, I’m hesitant to believe anything here for sure.) And Elliott’s sister Darlene, who now leads the rebels of Fsociety, is asserting herself in a way that could certainly lead in a dangerous direction.

Malek continues to play Elliott with a combination of neurotic intensity and hangdog absence – he’s both too much and out of it at the same time. In the opening episode, he’s a bit passive, as if waiting for the pieces to fall back to earth.

The episode doesn’t give us a lot of new information about E Corp, Whiterose, Tyrell Wellick, the Dark Army, Angela, or a number of the other players from season one. It’s deliberately rolling everything out.

Part of what makes “Mr. Robot” so skillful is its tone. It’s paranoid, tense, sleek, and polished. And it never pushes: The acting in particular is consistently understated.

The show also has a nuanced take on technology. There’s a “smart house” about halfway through, and it’s quite lovely to the eye and ear. But when it inevitably begins to go haywire, we see what happens when we depend too much on inanimate objects to do our thinking for us. The sequence is like the whole show in microcosm.

There are a lot of plot points left hanging by the end of what the show’s credits call “Part One.” Morally, we’re in free fall: How virtuous is Elliott? Did the hack that trashed E Corp make the world a better place, or did it hurt millions of regular people who now can’t use their credit cards or pay their mortgages? How much can we believe our eyes and ears on this show? But these 40 minutes demonstrate confident photography, intelligent writing, masterful acting, and a season to very much look forward to.