The new "Ghostbusters" delivers: It's a cheerful exercise in feminist nostalgia — except, wait, is that possible?

If you can handle the shock of four female "Ghostbusters," Paul Feig's remake is a cheerful summer diversion 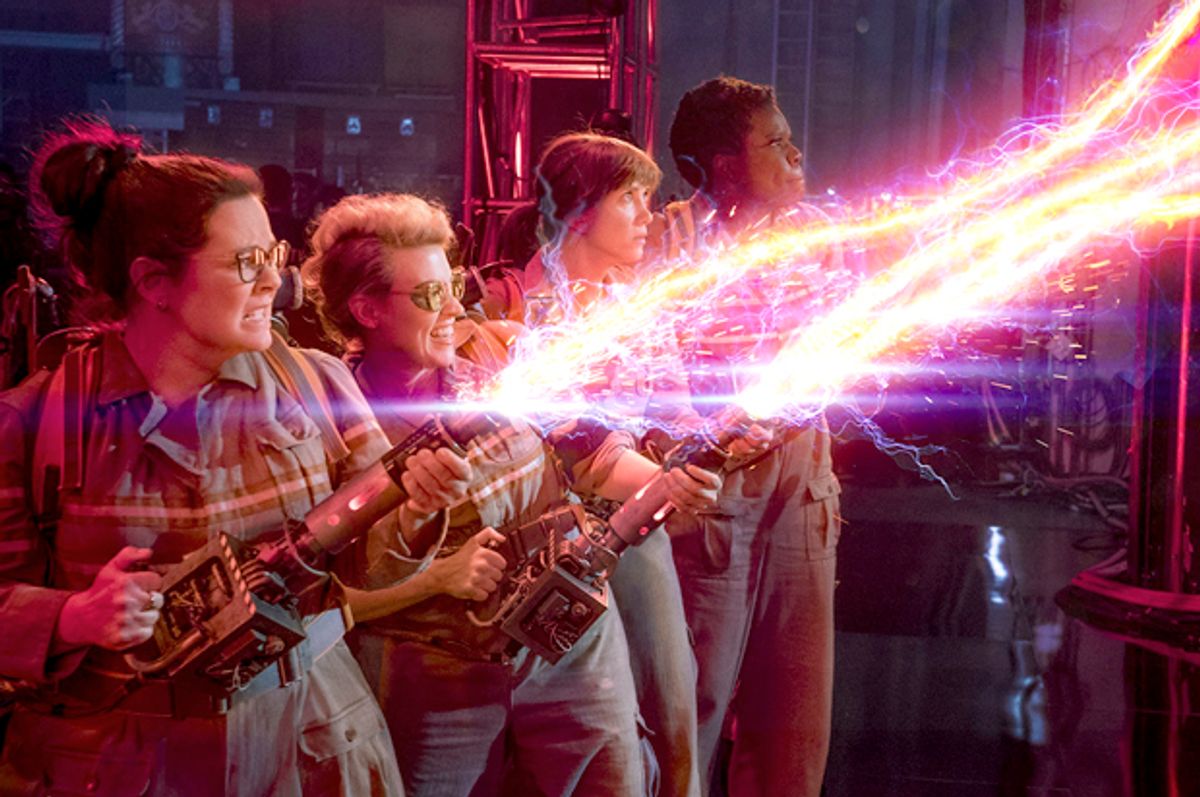 Is Paul Feig’s “Ghostbusters” remake, supposedly shrouded in supposed controversy ever since its supposedly subversive casting was announced, an exercise in feminism or in nostalgia? If this highly entertaining summer retread proves anything, it proves that those things are not incompatible. In some respects Feig’s film is an overly dutiful and respectful homage to the 1984 hit that represented a fusion of the National Lampoon spirit with Hollywood, and is now regarded as a comedy classic. Ivan Reitman, who directed the earlier film, helped produce this one, and at this point it can’t possibly be a spoiler to tell you that Dan Aykroyd, Bill Murray and Ernie Hudson appear in cameo roles. (Only the Ghostbusters, sadly, could make contact with original co-writer and co-star Harold Ramis.)

But at other times, including most of its better moments, Feig’s “Ghostbusters” is a goofy, free-floating romp with an anarchic spirit of its own, a fresh set of scares and laffs and a moderate dose of girl power that is unlikely to seem confrontational to anyone beyond the most confirmed basement-dwelling Gamergate troll. (Did I just indiscriminately slime an entire subset of the male Internet population? Oops.) Whatever the bizarre reaction to the “Ghostbusters” remake in some quarters is really about, it isn’t about the movie, which is relentlessly cheerful, entirely inoffensive and distinctly above the popcorn-movie standard in terms of wit and style. (The screenplay, by Feig and Katie Dippold, has a few unexpected nuggets — the 19th-century mansion with an “anti-Irish security fence” — that will be funnier on repeat viewing.)

As I write this, “Ghostbusters” has close to 2,500 user ratings on IMDB and a bomb-worthy 3.7 stars (out of 10). Since the film doesn’t open until Friday and the first media screenings were late last week, that outpouring of bile presumably represents haters who haven’t seen it. There are only 10 actual user reviews on IMDB at the moment, and the five I looked at (ranging from one to three stars) repeat similar phrases and themes in what Sherlock Holmes might consider a curious fashion: The acting is “cookie-cutter,” the film has an accusatory, man-hating agenda and Chris Hemsworth is the strongest element of the cast and should have been the star of a “real” remake. An action scene that spoiler-averse people would definitely see as a spoiler is repeatedly discussed, by way of proving that a summer movie about four women in jumpsuits who zap ghosts is a feminist-terrorist manifesto. (Only one of those reviews uses the phrase “Ghostbuster Tampons,” perhaps because it doesn’t make any sense. “Tampon Ghostbusters” would at least be vaguely coherent. Can’t anybody around here read or write English?)

It’s depressing but unavoidable to observe that the “Ghostbusters” cultural divide is like the political divide over Donald Trump, on a dumbed-down and entirely symbolic level. Except, no: Nothing could be stupider or more symbolic than the Trump phenomenon, so maybe “Ghostbusters” is the truly important issue. Whatever; I pretty much give up. America in 2016 is like a giant game of hide-and-seek conducted by blindfolded children in a dark room, with broken glass and rattlesnakes on the floor. If we look for the simplest explanation, the one that covers all the available evidence, it might be that Trump has gotten so bored with running for president that he’s spending his time writing hate-blurbs about “Ghostbusters” on the Internet. Sad!

Anyway, what were we talking about? Oh yeah, a movie, which is more of a likable curiosity than an epoch-shaping cultural moment. Feig’s “Ghostbusters” is arguably better made than Reitman’s and has far superior special effects, culminating with a terrifying parody of the Macy’s Thanksgiving Day parade that features … no, never mind, I shouldn’t say. But Feig’s movie can’t compete in one respect, or in several: The first “Ghostbusters” felt just the tiniest bit countercultural, like the post-Vietnam comedy resistance movement leaching into the mainstream for the first time. Several decades of confrontational TV comedy later, nothing about this movie has even the most remotely “alternative” edge. Which is understandable since nothing else does either.

Reitman’s “Ghostbusters” was also a movie set in New York and about New York, which three decades ago was conceived as a dirty, crime-ridden disaster area with loads of cheap real estate. The rise of the New Rich was already starting to render that untrue — only three years later would come Tom Wolfe’s “Bonfire of the Vanities,” and four years after that Bret Easton Ellis’ “American Psycho” — but “Ghostbusters” rode in on the tail end of an era of spectacular urban decline that feels like prehistory at this point. The jokes in Feig’s movie about how expensive stuff is in New York would have felt lame on “Friends.”

What’s that you say? The Ghostbusters are a bunch of chicks? Well, so they are. For my money, Melissa McCarthy and Kirsten Wiig, the big names in the all-female ghostbustin’ foursome, are a bit too locked into their established comic personas in Dippold and Feig’s script, and perhaps into more or less playing the Murray and Aykroyd roles from the original. Wiig is a Columbia physics professor in a plaid tweed suit who gets fired for her past history as a paranormal investigator, while McCarthy is (rather tiresomely) the irrepressible wild woman who hasn’t let a lack of resources, respect or credentials slow her down.

As everyone has told you already (even the grumpy, gross Internet dudes) the breakout star turn in “Ghostbusters” comes from Kate McKinnon as the engineering nerd who always refers to herself simply as Holtzman. (She has a first name too, according to the credits.) This is literally a character I haven’t quite seen before in the movies, but who definitely exists in real life: An intense female technophile, sexual orientation unknown (perhaps also by her), who isn’t “butch” or masculine but is entirely unaware that she might be attractive to others. With the exception of Wiig’s awkward attempts to flirt with Hemsworth, who plays the foursome’s inept receptionist—Annie Potts’ role, the first time around—there is pretty much no sex or sexuality in this movie at all. Depending on your perspective, that’s either progress or retreat, but it’s definitely a bold choice.

I also loved Leslie Jones as Patty, the history-obsessed subway clerk who becomes the fourth Ghosbuster and goes a long way toward redeeming the “extra black guy” role played by Hudson in the first movie. At first Patty may make some viewers’ hackles stand up: She’s uneducated and looks and talks “street,” and for the first five minutes seems about to become the sassy-wise African-American who lends authenticity to her white friends. Ultimately Feig and Jones walk that fine and dangerous line cleverly, and Patty emerges as an equal member of the team and an independent personality.

What else do you want here? There’s an evil entity unleashing a plague of ghosts in New York; the mayor wants to hush it up but the Ghostbusters know the truth will out. There’s a big old thingummy thumping down the street in the final showdown that’s meant to split the difference between funny and scary, and it isn’t the Sta-Puft marshmallow man. How’s that for a spoiler? All that stuff is way, way too pro-forma. But on the principle I once heard a Hollywood executive elucidate — moviegoers don’t want something they haven’t seen before; they want a familiar story, well told, with a minor twist — “Ghostbusters” delivers the goods. For some people, I guess the twist herein is OMG not freakin’ minor in the least! Those people need to get out more, but so do we all.