“The Bachelor” still so white: “UnReal” and “Finding Prince Charming” break new ground — why is the premiere dating show stuck in the past? 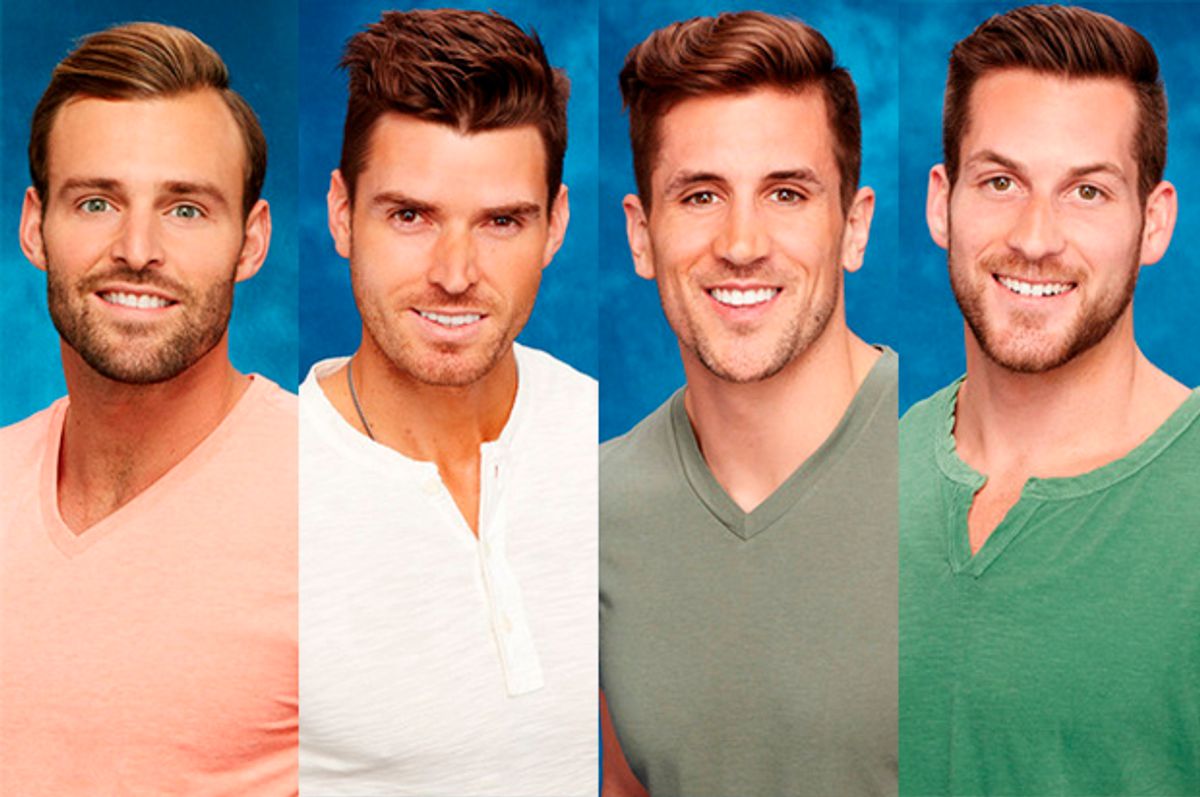 LOGO is going where no “Bachelor” has gone before: The network announced its first gay dating show on Wednesday, “Finding Prince Charming.” Hosted by former *NSYNC member Lance Bass, 13 men will vie for the attention of an eligible suitor when the program debuts in the fall.

The inaugural attempt at queering the format was “Boy Meets Boy,” the Bravo show that lasted just one season in 2003. The reality program, which aired just six episodes, featured a bizarre twist: Some of the 15 potential picks were straight, and if the bachelor were to choose a heterosexual match, he would forfeit a $25,000 cash prize (which would then be awarded to the contestant instead). Luckily, suitor James Getzlaff chose Wes Culwell, a gay travel writer and filmmaker. They split shortly after filming wrapped.

As Mic’s Kevin O’Keefe pointed out, the “Finding Prince Charming” faces its own myriad issues. Here’s just one of the many problems with its problematic premise: How does the show, which LOGO says is focused on seeking “an exclusive relationship,” keep the contestants from romancing each other instead of the suitor? If the heart wants what it wants, it’s possible that the gay hopeful who earns that final rose may have already fallen for someone else.

What makes “Finding Prince Charming” more noteworthy, though, than its gay spin on a well-worn format is that the suitor is a man of color: Robert Sepúlveda Jr., an interior designer based in Atlanta, originally hails from San Juan, Puerto Rico.

This choice is a marked contrast to “The Bachelor” and “The Bachelorette,” which haven’t featured a non-white suitor since the Juan Pablo Galavis fiasco of 2014, the least popular bachelor in the show’s history. (Current “Bachelorette” suitor JoJo Fletcher is half-Persian — as Fusion points out in this pre-season article, it’s complicated.) The 34-year old Brazilian infamously dismissed the idea that there would ever be a queer suitor—because gays are perverts. “There's this thing about gay people—it seems to me, I don't know if I'm mistaken or not—I have a lot of friends like that, but they're more pervert in a sense,” Palavis said. “To me, the show would be too strong, too hard to watch on TV."

Palavis was the first—and thus far, only—person of color to be featured at the center of “The Bachelor” since the franchise debuted in 2000.

It’s telling that the shows inspired by the groundbreaking success of “The Bachelor,” one of the most successful reality franchises in the history of the genre, are willing to go so much further than their predecessor, which remains decades behind in its racial politics. In addition to “Finding Prince Charming,” Lifetime’s Peabody-winning “UnReal” debuted its first black bachelor, Darius, played by B.J. Britt (“Being Mary Jane”). It’s a stark contrast to the “Bachelorette,” where a black contestant has never made it past the fifth episode.

“UnReal,” a merciless satire about the behind-the-scenes drama of reality dating shows, is well-aware of this. The Lifetime show was created by Sarah Gertrude Shapiro, who based it off her three seasons as a producer of “The Bachelor,” where she had to threaten to commit suicide to get out of her contract.

Rachel (Shiri Appleby) is a Vassar-educated feminist who dreams of bigger things than being a producer on “Everlasting,” the show within a show. She’s smitten with a fellow producer, Coleman (Michael Rady), who directed a documentary on sex trafficking before coming on board the fictional program. She believes that a black Bachelor can make a difference, in the same way that featuring Pedro Zamora on “The Real World,” the show’s first gay housemate, helped further a conversation about HIV during a time of national crisis.

Her boss, Quinn (Constance Zimmer), just wants “suicide ratings.” When a bipolar contestant killed herself on the show during the previous season, it delivered record numbers. She thinks that a black suitor could sell—but a woman of color won’t. “The more white pussy the better,” Quinn says. “The minute he lays a black hand on a white ass, Twitter will light on fire.”

Throughout “UnReal,” she repeatedly sabotages any black woman who gets close to Darius. When Ruby (Denée Benton), a social justice activist who came on the show for a wider platform for her audience, emerges as the frontrunner, Quinn conspires to have her eliminated. The producer calls Ruby’s father to persuade her to quit the show, and the confrontation leads Darius to send her home.

Elsewhere, while filming a sequence of contestants stepping out of a carriage, Quinn makes the crew redo the scene after a black woman steps out first. She’s not “wife material.”

It’s hard to say how much of “UnReal” is based off Shapiro’s own experiences on “The Bachelor,” but if the show is an exaggeration, it’s perhaps not much of one: A detailed Fusion survey showed that 59 percent of the show’s black female contestants are sent packing in the first two weeks.

There are an absurd number of examples as to how routinely “The Bachelor” and “The Bachelorette” marginalize non-white people. In 2012, bachelorette Emily Maynard sent home Lerone Anu, a hunky real estate developer, during the first episode. Life and Style magazine hypothesized that the problem was a clash of personalities (the mag “[didn’t] see his personality meshing well with Emily’s”), but they barely exchanged words. Lerone got a handful of lines—at most—before he was ousted.

Many seasons, however, don’t feature a contestant of color at all. In 2011, every eligible mate on on the “The Bachelor” and “The Bachelorette” was white.

The following year, the network was slapped with a racial discrimination suit over the practices it employs to select contestants for these programs. A class action lawsuit filed by Nathaniel Claybrooks and Christopher Johnson alleged that producers “knowingly, intentionally, and as a matter of corporate policy refused to cast people of color in the role of ‘The Bachelor’ and ‘The Bachelorette.’”

The court sided with the defendants, saying that it’s the prerogative of producers to cast whomever they like on protected First Amendment grounds. The suit, nonetheless, appeared to impact the show’s selection process when the number of minorities tapped to be on the show skyrocketed: In 2013, a combined 12 people of color were featured on “The Bachelor” and “The Bachelorette,” including Catherine Giudici. Giudici, who is part-Filipino, became just the second non-Caucasian woman to win (after Tessa Horst, also of mixed-heritage, in 2007).

Since then, the show has more or less gone back to normal, despite repeated promises from producers that the two programs would become more racially inclusive.

During a recent press tour, then network president Paul Lee (who was replaced by Channing Dungey) claimed that he would “be very surprised if ‘The Bachelorette’ in the summer isn’t diverse.” Rumors suggested ABC would follow through: The L.A. Times reported that Caila Quinn, who is half-Filipino, was “seen filming segments” for the upcoming season. Producers decided to “go in a different direction,” as the jargon goes: Fletcher, who is a dead ringer for Isla Fisher, was tapped.

Choosing Fletcher, though, wasn’t enough to quell criticisms of the show after what many saw as a disappointing season: Jubilee Sharpe was cut from the show by Ben Higgins on the first day of Black History Month. Sharpe, a black veteran with a sly sense of humor, was a fan favorite and seemed like she could go all the way after Higgins selected her for a coveted one-on-one date.

The suitor, though, sent her home after he felt felt as if she were pulling away from him. What was really going on is that Sharpe was subjected to repeated racial scrutiny from other female contestants, which made her nervous and uncomfortable about her place on the show. Lauren Himle, a 25-year-old kindergarten teacher from Dexter, Mich., famously argued that Jubilee didn’t have what it takes to be Ben’s mate. “Ben wants a wife who will be friends with all the other soccer moms,” she said. The remark feels pulled straight from “UnReal” itself.

With shows like “UnReal” and “Finding Prince Charming” breaking new ground in reality television, “The Bachelor” isn’t stuck in the past. It’s practically obsolete.