Time to move on: Sanders has endorsed Clinton, but some of his backers are still pointlessly raging against reality

The primaries are over — progressives now must get together and make the easy choice: Clinton or Trump? 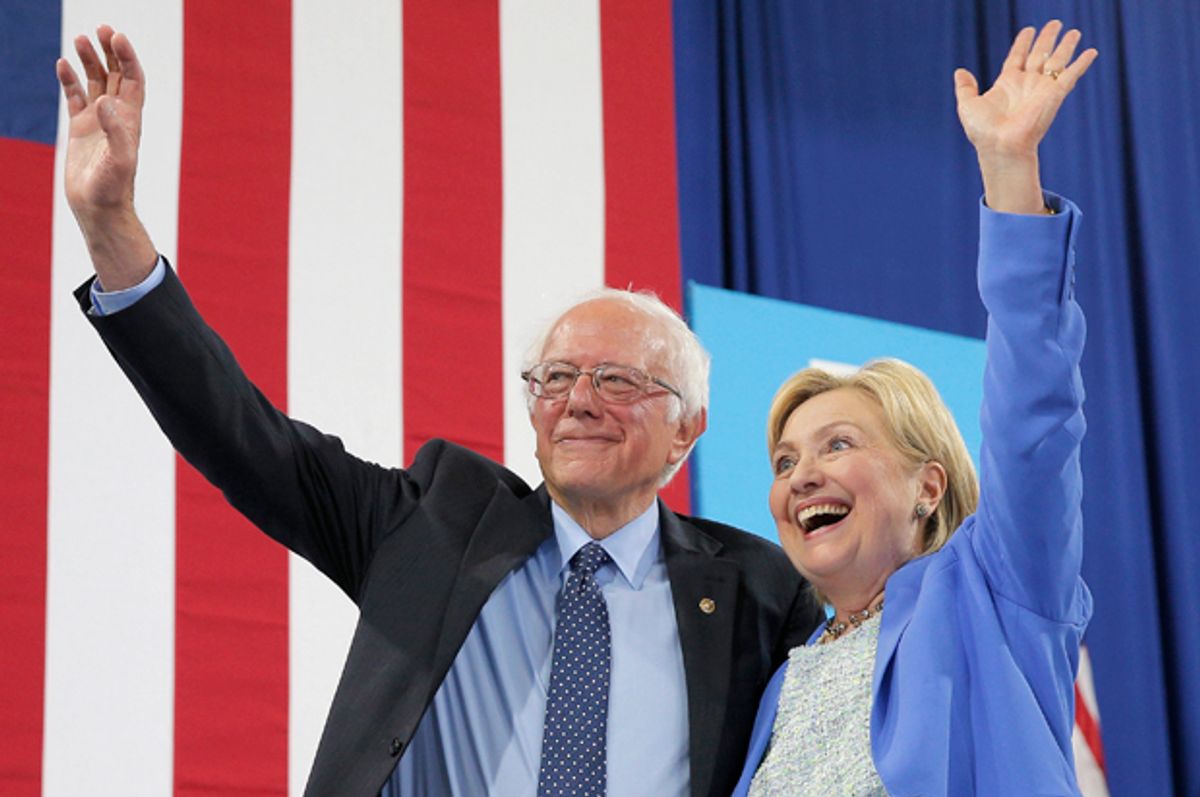 Bernie Sanders ran an extraordinary race. But he lost and Hillary Clinton is the Democratic nominee. Thus we have two choices in November: Trump or Clinton. Yes, I know who Jill Stein and Gary Johnson are, but neither of them will be president. This isn't ideal. We ought to have more than two plausible choices. But we don't. Sanders supporters can engage with that reality or they can ignore it. In either case, we have to confront it.

On Tuesday, Sanders did what we always knew he would do: He endorsed Hillary Clinton. Because that's what adults do in a democratic society once they've lost a campaign to a member of their own party. It's also what someone committed to progressive goals would do. Clinton is not a progressive by any measure, but she's closer to Sanders than Trump on nearly every issue of import. She's also not an ethno-nationalist whose knowledge of the world is reducible to half-remembered sound bites. But I digress.

Sanders summed it up nicely:

“This election is about which candidate will nominate Supreme Court justices who are prepared to overturn the disastrous Citizens United decision which allows billionaires to buy elections and undermine our democracy; about who will appoint new justices on the Supreme Court who will defend a woman's right to choose, the rights of the LGBT community, workers' rights, the needs of minorities and immigrants, and the government's ability to protect the environment...This campaign is about moving the United States toward universal health care and reducing the number of people who are uninsured or under-insured. Hillary Clinton wants to see that all Americans have the right to choose a public option in their health care exchange, which will lower the cost of health care. She also believes that anyone 55 years or older should be able to opt in to Medicare and she wants to see millions more Americans gain access to primary health care, dental care, mental health counseling and low-cost prescription drugs...”

Clinton does not represent change. She's of the system and has exploited it as much as anyone. But Sanders is right: She has vowed to fight on all these crucial fronts. Perhaps you don't trust her – fine. But is there any reason to trust Trump? When so many lives hang in the balance, why roll the dice? Casting a meaningless protest vote may feel righteous, but it won't help poor people get health care and it won't ensure that women have autonomy over their bodies for the next fifty years. And when Trump has all but promised to deliver the Supreme Court to movement conservatives, voting to “blow up” the system isn't noble; it's irresponsible.

Predictably, there's a contingent of Sanders supporters, the Bernie or Busters, who aren't buying it. Almost on cue, they took to the internet yesterday to lambaste their former hero and charge him with betrayal. Sanders's Facebook page was littered with petulant lamentations. “Intelligent Bernie supporters will NEVER support her because she stands for everything we're fighting against,” one wrote. Another said: “You chose her over us. Truly shocked and saddened by this.” “You broke my heart and betrayed the left Senator Sanders,” another posted. At the rally itself, several Bernie fans walked out as Sanders endorsed his former opponent. And there are reports that disillusioned Sanders voters are planning a “fart-in” (yes, you read that correctly) at the convention, to show the Democratic Party just how much they think Hillary stinks.

This is ridiculous, of course. It won't accomplish anything and it demonstrates how delusional this element of Bernie's base is. “She stands for everything we're fighting against.” Really? What about the long list of policies Sanders cited yesterday? Clinton and Sanders's positions are indistinguishable here. “Truly shocked and saddened by this.” Really? At the very first debate, Sanders said “Hillary Clinton will be an infinitely better candidate and president than the Republican candidate on his best day.” And you're “shocked” he endorsed her over the worst Republican candidate imaginable?

I've made no secret of my support for Sanders. But Clinton won, and it wasn't merely because of superdelegates. She won because more people voted for her – period. Pretending otherwise is pointless. So what to do? Make no mistake: a progressive vote for Stein or Johnson is a default vote for Trump. All the rancor about the “lesser of two evils” approach won't change that fact. The Sanders-Clinton arguments are immaterial now. Sanders won't be on the ballot.

If this wasn't a cult of personality, if it was actually about making the Democratic Party more progressive, then the Sanders campaign has already succeeded. No, you won't get everything you want. No, our process won't be transformed overnight. But that was always the case, no matter the outcome of this nomination battle. Change happens incrementally. As president, Sanders would confront the limits of our system like everyone before him, and many of his policies would've died a quick death in Congress – that's the reality. He understood this all along, which is why he's called for a grassroots movement to keep the focus on Congressional races beyond November.

The truth is that Sanders has already put his stamp on the party. He's won policy concessions from the Democratic platform committee on key issues, and there will be a price to pay if they backtrack. He's now one of the most important voices in the party. Clinton may be the nominee, but she's been forced to absorb part of Sanders agenda, and that's a tremendous victory for him and his supporters.

If that's not enough, the brute fact remains: it's Trump or Clinton. An experienced Democrat who aligns with liberals on most issues and will make hugely consequential SCOTUS nominations or a race-baiting TV huckster who thinks climate change is a Chinese hoax and has vowed to build walls and ban Muslims.

Is that really a choice?