Considering Pence's stance on immigration and abortion, it's no wonder Trump chose him as his VP 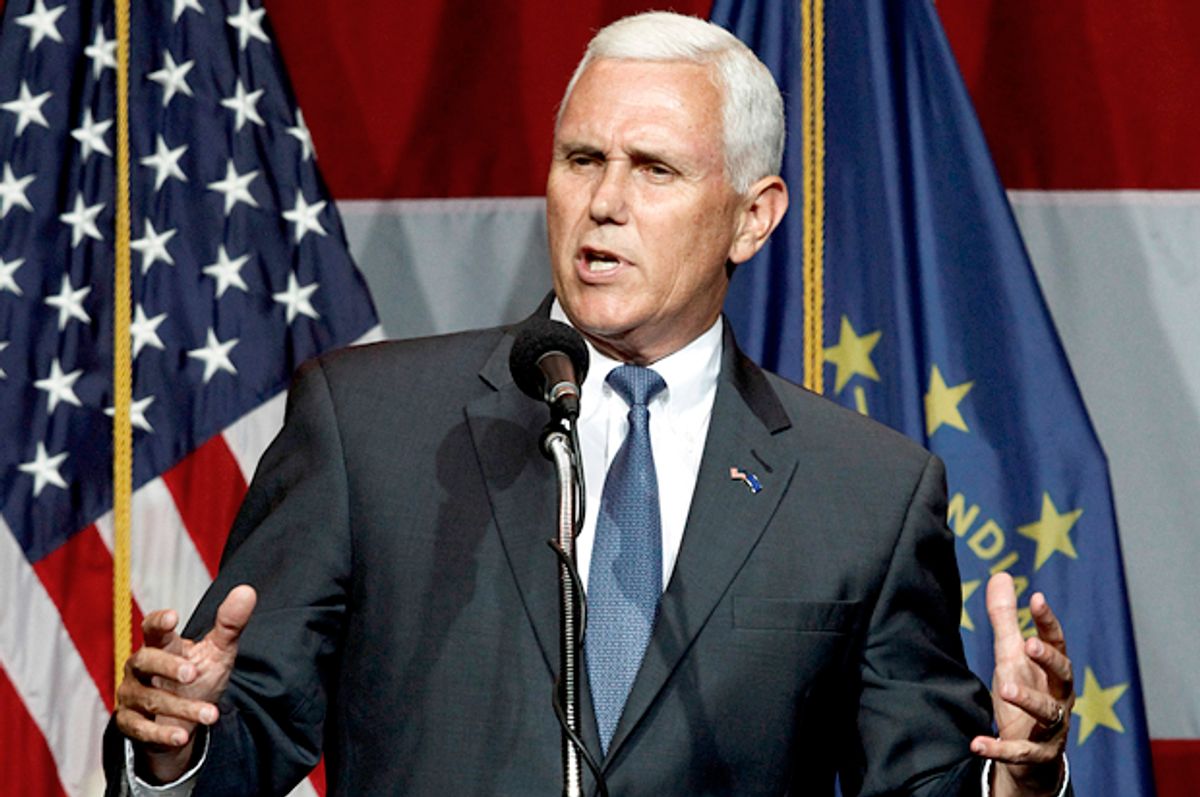 On Thursday,  The Washington Post reported that presumptive GOP nominee Donald Trump would be tapping Indiana Gov. Mike Pence as his vice president.

Stephen Colbert said it best on his "Late Show" Wednesday night: "Who the hell knows anything about Mike Pence?"

The truth is, outside Indiana, not too many people have even heard of the guy. So here's a primer:

Pence is one of two — along with Kentucky's Matt Bevin — sitting governors who are avowed members of the Tea Party Caucus.

2. He wasn't always a Republican

According to a USA Today report, Pence — raised by Democrats — veered right as an undergrad, inspired by then-President Ronald Reagan's "brand of conservatism and his views on limited government."

3. He was, for a time, a radio personality

Pence hosted a drive-time talk show in the '90s, likening himself to "Rush Limbaugh on decaf."

4. He's got the Koch connection

Pence was a potential contender in 2016 because of his close connection with the Koch Brothers' Americans for Prosperity Super PAC.

"A number of Pence’s former staffers from his days in Congress have assumed major roles in the brothers’ corporate and political spheres," Politico reported in 2014. "And Americans for Prosperity ... has been holding up Pence’s work in Indiana as emblematic of a conservative reform agenda they’re trying to take nationwide."

5. He endorses a strong Church and State connection

Pence is thoroughly opposed to the separation of church and state, as indicated by his 0% (the highest level of opposition) rating from watchdog group Americans United for Separation of Church and State.

"If Planned Parenthood wants to be involved in providing counseling services and HIV testing, they ought not be in the business of providing abortions," Pence said. "As long as they aspire to do that, I’ll be after them."

All three pieces of legislation excluded cases of rape, incest, or danger to the mother.

7. He couldn't be more aligned with Trump on immigration

In 2006, Pence and Texas Senator Kay Bailey Hutchison proposed a visa program to allow ejected illegal immigrants from Mexico, Canada, and most of Central America to apply for government-approved work visas after having undergone criminal background checks and health screenings.

The two-year Secure Authorized Foreign Employee (SAFE) visa, as it was called, would have allowed participants to renew up to five times, for a total of 12 years.

As governor in 2014, Pence tagged onto a multi-state lawsuit filed against President Obama for a series of executive actions pertaining to illegal immigration and amnesty for families.

And three days after the 2015 ISIS-credited Paris attacks, Pence joined as many as 30 U.S. governors in banning Syrian resettlement in his state. The ACLU took Pence to court, where Federal Judge Tanya Walton Pratt ruled his ban unconstitutional, adding that it "clearly discriminates against Syrian refugees based on their national origin."