Anatomy of a right-wing hoax: A year later, the Planned Parenthood videos are still backfiring on the scammers

The Center for Medical Progress embarrassed the right, not Planned Parenthood, with their false accusations 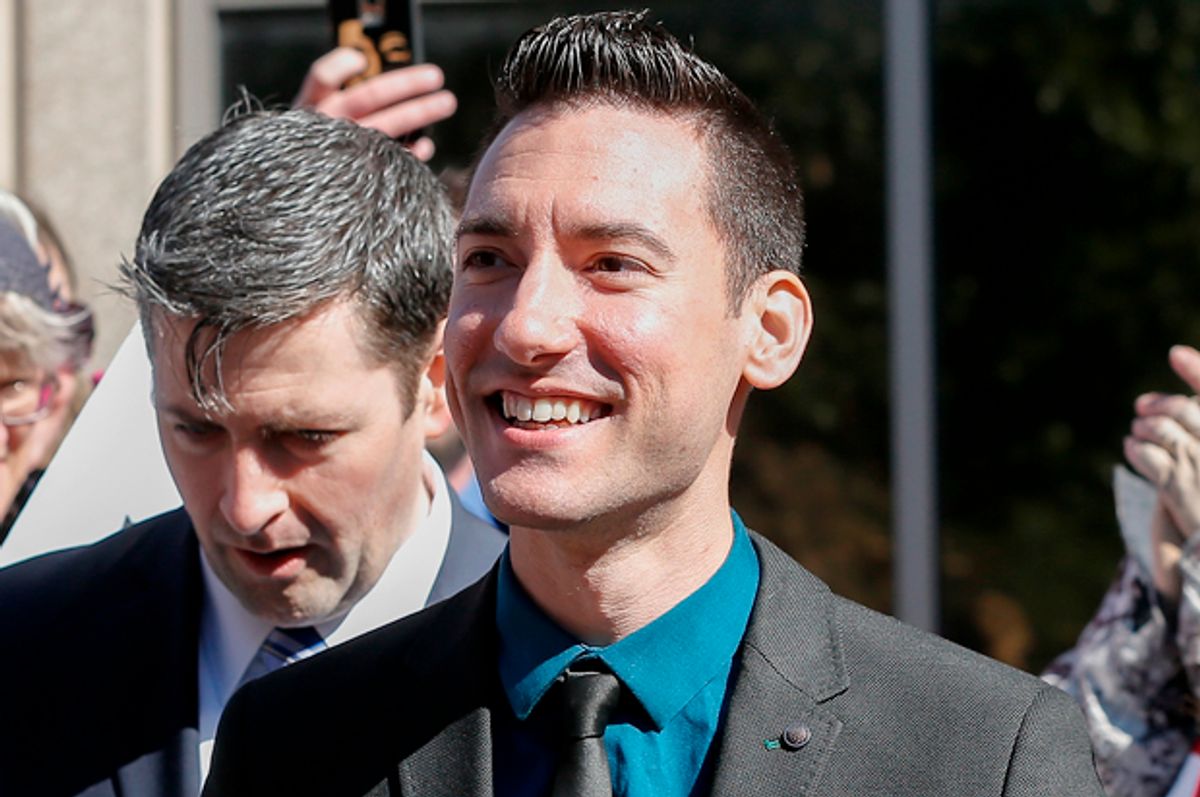 Hard to believe it, but a year and one day ago, most Americans were blissfully unaware of a lurid urban legend that had previously only thrived in the anti-choice community: That Planned Parenthood was in the business of selling "baby parts" garnered from abortions on the black market.

To those of us who encountered this tale before, it seemed it would never gain traction outside of the gullible circles of the Christian right, i.e. the same people who believed that Proctor & Gamble was run by Satanists and that "Jesus Take The Wheel" offers good advice about auto safety. That, and the notion that the venerable health care non-profit is just a front for a fetus-selling underground is a self-evidently idiotic conspiracy theory that surely would strike anyone who encountered it as nonsense.

But a year ago, a group going under the mysterious name the Center for Medical Progress (CMP) managed to turn this obscure urban legend into a national controversy by releasing what they claimed was a hidden camera video of a Planned Parenthood doctor  supposedly admitting to being a part of this conspiracy.

The claim was a lie. The nine-minute video was heavily edited from hours of footage to make it seem like the doctor was admitting to those things.

But those who watched the longer video quickly realized the doctor was saying exactly the opposite of what CMP accused her of saying. In the longer version, she repeatedly makes it clear that Planned Parenthood does not sell fetal tissue. Instead, they donate fetal tissue, tissue that would otherwise go into biowaste, to medical research at the behest of that patients, most of whom are undergoing later abortions because of medically necessary reasons.

All these facts and context came out in the hours and days after the initial, lurid reports about the "undercover" video, after reporters had some time to do their research and actually watch the longer video the hoax video was pieced together from.

CMP's strategy was sleazy but effective, taking advantage of the internet era's rush to get the story out while it's still hot — and before there's a chance for thorough fact-checking, or even basic research. And in those few precious hours between the initial reports and the facts being released, the story about "baby parts" being "sold" became a national story, and one that became ingrained wisdom on the right. Conservatives would continue clinging to the lie despite overwhelming evidence that it's just pure, uncut bullshit.

A year ago, it looked like CMP's strategy of shameless lying had scored a direct, perhaps even fatal hit on Planned Parenthood and a major injury to the cause of reproductive rights. It was enough pretext for Republicans to renew attacks on Planned Parenthood's funding and advance the real agenda behind all this, which is cutting off low-income women from affordable contraception.

But now, a year later, it's starting to look like those who stand up for science and women's health care access were not conquered so easily with a few laughable lies. In many ways, the widespread embrace of such cynical and corrupt tactics has backfired on the right.

To back up this argument, Sackin cites polling that shows that support for Planned Parenthood has risen in the past year and notes that "voters in key swing states saying that opposing care at Planned Parenthood actually makes voters less likely to support a candidate." She goes on to highlight how the Democratic party, with Hillary Clinton at the front, has strengthened its commitment to reproductive rights.

Just last month, the anti-choice movement was dealt a legal blow that sets the movement back at least a decade, when the Supreme Court struck down a Texas law meant to use red tape regulations to squeeze legal abortion out of existence. Now there are plans to use the decision to challenge all manner of anti-abortion laws across the country.

Justice Breyer's decision in this case was centered around the problem of anti-choice dishonesty, as the Texas law was passed in bad faith. That the arguments were being held during a year-long furor over obnoxious and obvious anti-choice lies could not have helped dissuade the justices from viewing anti-choicers as a bunch of liars.

The people behind the CMP videos, especially the ringleader David Daleiden, are quickly finding out exactly how much legal trouble  that pushing these kinds of lies can get you. Both Planned Parenthood and the National Abortion Federation (NAF) have filed lawsuits against CMP. As this timeline offered by NAF shows, CMP's legal defense is not going well and they are losing most of the court battles in this slow-moving process.

CMP also had to tangle with the criminal authorities. A grand jury convened by Republicans to dig up dirt on Planned Parenthood instead, after looking at the evidence, chose to indict Daleiden and his co-conspirator instead. California officials have also raided Daleiden's home, confiscating a laptop and multiple hard drives, though no charges have yet been filed.

Politicians who pretended to believe the accusations in these hoax videos haven't fared much better. During a September Republican primary debate, Carly Fiorina told a massive whopper, claiming that CMP had released a video showing "a fully formed fetus on the table, its heart beating, its legs kicking while someone says, ‘We have to keep it alive to harvest its brain.’"

For a few days, this lie helped bolster her polling numbers. After all, it's not like most people actually watched the videos themselves. Eventually, however, fact-checking reports from those who did watch the videos caught up with her and her reputation as an obnoxious liar helped send her poll numbers into the tank.

In the same month, House Republicans decided to drag Planned Parenthood CEO Cecile Richards into a kangaroo hearing clearly designed to embarrass her. Instead, Richards turned the tables on them, drawing attention to their various falsehoods, which swiftly became fodder for late night comedians.

A video demonstrating how many times the Republican men interrupted Richards, making them look like sexist asses they are, quickly went viral.

Having not learned a single thing from this political embarrassment, House Republicans authorized the creation of the ridiculously titled Select Investigative Panel on Infant Lives, headed by Rep. Marsha Blackburn, in October. Since then, the panel has heard testimony from a variety of anti-choicers, right wing nuts, and a woman who insists that her main credential is that she is a "wife and a mother".

For months, this panel has supposedly been trying to ascertain whether there is, in Blackburn's words, a "profit scheme that has developed around the sale of the organs of these babies." The answer to the question should be obvious — no, you idiots — and no surprise, months of desperately digging for any evidence has yet to produce anything substantive.

The continued existence of this travesty of a panel is starting to draw negative attention from outside the women's  health care world. Earlier this week, a diverse coalition of 20 organizations co-signed a letter from the ACLU demanding that Speaker Paul Ryan put an end to this charade.

The signatories include groups like the SEIU, the Sierra Club, the National Immigration Law Center, the NAACP, and the American Federation of State, County and Municipal Employees (AFSCME) — groups that have no relationship to the debate over reproductive rights, but who felt they had to say something.

Denouncing the panel for going on "a fishing expedition in an apparent attempt to ratify a discredited smear campaign against Planned Parenthood", the letter argues that the panel's "actions offend basic standards of fairness and respect for the rights of American citizens".

CMP failed to bring down Planned Parenthood or even move the football, politically, against legal abortion or affordable contraception. Unfortunately, the "baby parts" lie was successful in one regard: It fired up some of the most violent and unhinged elements of the anti-choice movement.

"We have seen a dramatic increase in hate speech and internet harassment, death threats, attempted murder, and murder, which coincided with the release of these heavily-edited, misleading, and inflammatory videos last year," Vicki Saporta, the president of the National Abortion Federation told me over email.

In April, NAF released a report showing that the release of the hoax videos precipitated a rise in anti-clinic violence generally, with the most shocking example being a mass shooting in a Colorado Planned Parenthood, where a man named Robert Dear killed three people, which he justified by spewing incoherent nonsense about "baby parts".

It's not just abortion providers that are affected, either. Since donated fetal tissue is used in medical research, researchers who have never worked in gynecological care are now sucked into the culture of fear and violence.

"Researchers and scientists have repeatedly said that the misleading, inflammatory videos and the resulting politically-motivated investigations have delayed potentially life-saving research," Saporta explained. "As a result of the videos, researchers and institutions have been threated and targeted."

Blackburn's panel made this worse, by "accidentally" revealing the names of medical researchers in a memo that was easily accessed by the terrorist-minded elements of the anti-choice movement.

It's important not to forget the anti-choice movement's tacit-if-unadmitted reliance on the threat of violence in order to exert pressure on abortion providers. But that so many in the movement are drawn to using threats and violence to get their way is likely due, in no small part, of their inability to achieve the goal of demonizing reproductive rights and sexual autonomy in any other way.

CMP initially got a credulous hearing, even amongs some people who really should have known better. This is a testament to their ability to manipulate both the news cycle, as well as lingering and often subconscious hostility towards women's growing independence.

But in the year since the videos came out, it became clear that while the public might be easily provoked with lurid stories demonizing sexual health care, people quickly regain their senses. While female sexuality makes many people uncomfortable, they still ultimately agree that sexual health care is not evil or gross, but necessary. Attacking people's health care access — or their right to a safe and healthy sex life — is more likely than not to blow up in conservative faces.