Ginsburg howls at Trump: She has every right to wade into the presidential election

The "controversy" is overblown: Supreme Court judges have never been immune to the trappings of partisan politics 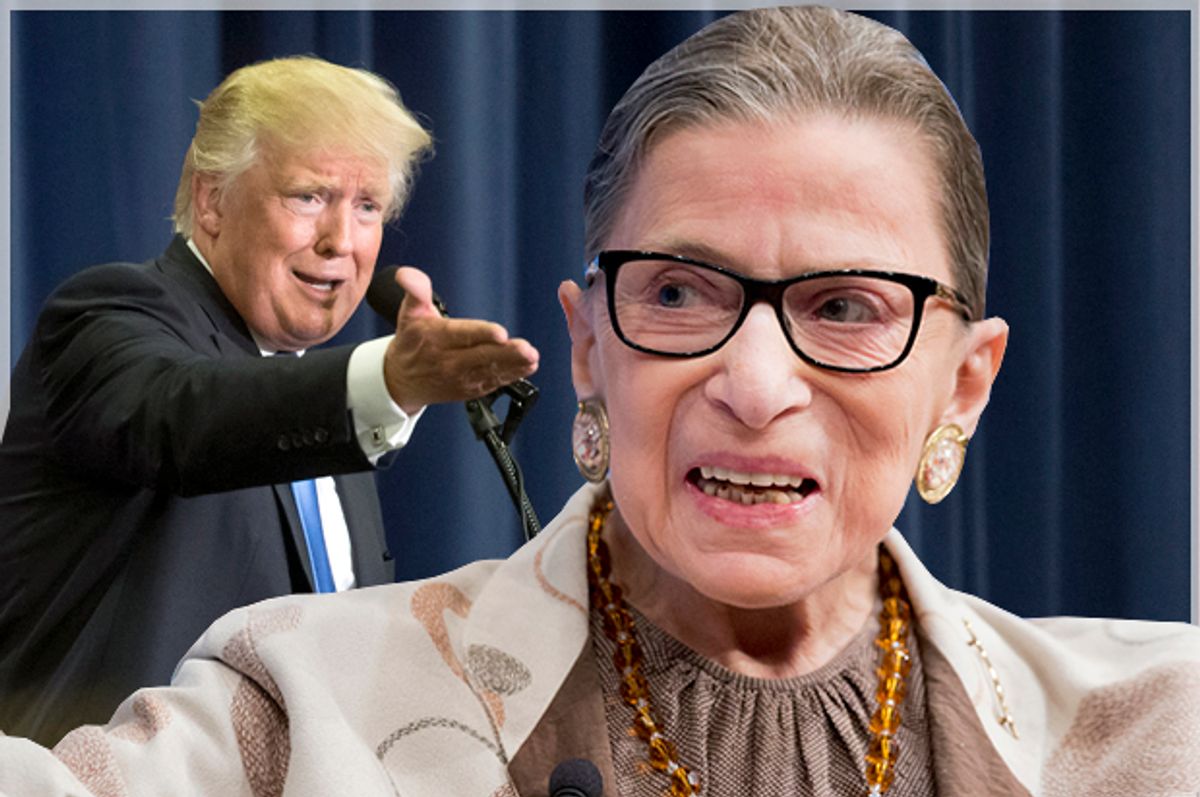 On Tuesday, Supreme Court justice Ruth Bader Ginsburg burned down what remained of America’s democracy and spit on the ashes.

At least that was the impression you might have gotten if you paid attention to some of the hand-wringing in certain corners of the commentariat. Ginsburg “crossed a very important line” when she admitted that the possibility of a Donald Trump presidency horrifies her. Her violation of the norm that Supreme Court judges stay above the fray of partisan politics to preserve the image of judicial impartiality “is a crucial marker of our political institutions’ progress (or regress) toward complete polarization.” (As if we’re not damn near already there.)

Fox News even found a couple of Democratic senators to say Ginsburg was wrong to offer her comments, which gave the site an excuse to use “both sides” in a headline. Somewhere, Roger Ailes smiled for the first time in a week.

Ginsburg’s politicking to an interviewer from the Associated Press might have been a little more open than, say, the speeches her former colleague Antonin Scalia used to deliver at Federalist Society dinners. But the idea that she has “crossed the line” or shattered some previously unspoken and unbroken pact America has with its Supreme Court judges that they stay away from politics is overblown.

Certainly, we expect judges to refrain from, say, campaigning with their favored presidential candidate or offering public endorsements. There is even a judicial Code of Conduct that explicitly bars participating in political activity, though it’s nonbinding and therefore more of a strong suggestion. I’m going to go out on a limb and suggest that Ruth Bader Ginsburg, who was first appointed to the federal bench by Jimmy Carter, is aware of this code and chose to ignore it anyway.

(For my money, Ginsburg already gave the most norm-shattering critique of American politics of any Supreme Court justice ever when she napped through part of that overblown bit of stagecraft, the president’s State of the Union speech, last year. But that’s another story.)

That does not mean that Ginsburg’s comments are one more domino falling in a chain that ends with John Roberts offering the keynote speech at the RNC. But for us to continue pretending that the third co-equal branch of our government can somehow remain immune to the highly polarized atmosphere of the other two is to infantilize the American public.

For starters, Ginsburg is a liberal and strong supporter of left-wing dogma. How is the fact that she fears Donald Trump winning the election surprising? Are otherwise moderate voters who might be on the fence about which candidate will get their vote going to say, “Holy cow, if Justice Ginsburg feels this way, perhaps I should vote for Hillary Clinton?” Or are they going to say, “Of course Ginsburg doesn’t like Trump. She’s a liberal!”

No matter how much political commentators and keepers of the sacred flame of judicial impartiality flail their arms in anguish, I’m guessing that’s how most voters will see things. It is pretty much baked into the system these days.

For another, the Supreme Court, and the judiciary more generally, have long been used as political weapons to deliver victories that can’t be achieved at the voting booth. Unless you think the 40-year project of conservatives to seed the judiciary with right-wing judges, or that John Roberts fulfilling his career-long goal of gutting the Voting Rights Act and making it harder for minorities who overwhelmingly vote for Democrats to do so was just a happy coincidence unrelated to politics.

Which leads to one more point about why this controversy is overblown: The makeup of the Supreme Court is already an issue in this election. Really, it’s an issue in every election, but with the polarization that has seen a long string of 5-4 Court decisions on particularly politicized cases in recent years (Citizens United, Hobby Lobby, Obergefell, to name just a few), it’s a particularly potent one in 2016. Which is one reason why Clinton supporters have made the case over and over to Bernie Sanders holdouts that control of SCOTUS is too important to leave to Trump. Meanwhile, Trump has already tried to reassure the Republican base nervous about his conservative bona fides that he will outsource any SCOTUS nominations he gets to make to the Heritage Foundation.

There is a legitimate fear that the norms that have always allowed our government to function are falling away and therefore causing paralysis at the highest levels. One need look no further than the empty seat on the Supreme Court, left vacant by Scalia’s death in February. Republicans in the Senate have broken with precedent in not so much as scheduling a hearing on the nomination of Merrick Garland to replace him, and come up with one lame excuse after another to justify this action. This has resulted in a string of tie decisions in Supreme Court cases, which is probably worse for the long-term health of the judiciary, for reasons that others have been writing about for months.

There is also a good chance that the voters in Iowa will punish Judiciary Chairman Chuck Grassley for his actions when he runs for re-election in the fall. If they do, if his SCOTUS obstructionism really does result in Grassley being denied a sixth term in office, then that will be a data point in favor of the system still having some equilibrium.

Ginsburg’s comments on Trump don’t destroy the image of her as an impartial justice, because that image didn’t exist to begin with. She’s part of a system, and that system will continue to creak on. Acknowledging that a Trump presidency scares her does not change that.