The Kris Kobach factor: Why you must get to know Kansas' radical secretary of state 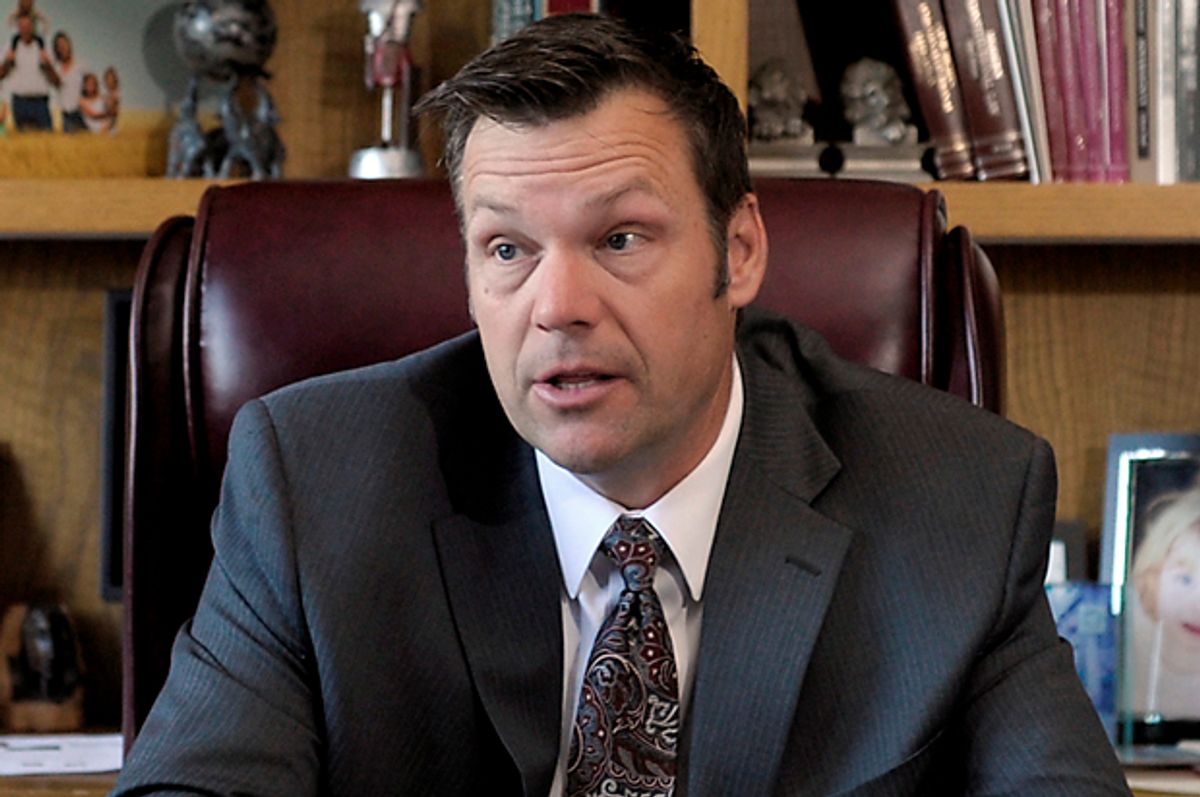 If by some chance Donald Trump were to actually become president, one of the people he would undoubtedly tap for a role in his administration would be Kris Kobach, a hardcore right-wing activist with a particular expertise in anti-immigrant legislation. Before he ran for office in Kansas he helped Republican state legislatures write anti-immigrant legislation, most famously Arizona's "show me your papers" law which was thankfully tossed out by the federal courts.

Naturally, he enthusiastically endorsed Trump and has even gone so far as to take credit for Trump's plans to "make Mexico pay for the wall," in which the US government can supposedly use a provision of the Patriot Act to stop undocumented workers from transferring money to their families over the border. Since Trump estimates that the border wall will cost 10 billion and the estimated amount of money that flows over the border is 20 billion per year, Trump and Kobach believe that the Mexican government will be so frightened by the prospect of losing all that money that they will agree to pony up the 10 billion just so they don't lose it all. Kobach told the Topeka Capitol Journal that Trump is "an excellent negotiator and he looks for opportunities to put pressure on opposing parties in negotiations and this fits the bill." (As we now know, Trump's reputation for business savvy is just a tad overblown so he is likely too optimistic in that regard.)

President Obama called Trump's plan "half-baked" and told reporters, “the notion that we’re going to track every Western Union bit of money that’s being sent to Mexico — good luck with that." Others pointed out that, if it were to be found a legal application of the Patriot Act, which is doubtful, it would simply create a shadow money transfer system which would end up making it much harder to track legitimate criminal money laundering.  And it's highly likely that former president of Mexico Vicente Fox spoke for every member of the Mexican government when he said, "I'm not going to pay for the f**king wall," anyway.

Kobach is such a leader in the anti-immigrant circles that he was pushed for the VP slot  by Trump's nativist fans. As Zachary Roth at MSNBC reported last May:

The nativist website VDARE.com has promoted Kobach as a veep selection for Trump. Peter Brimelow, the site’s founder, called Kobach’s endorsement of Trump “a very brave move,” adding: “Kobach for veep.” The Southern Poverty Law Center describes VDARE, which has regularly published writing by white nationalists and anti-Semites, as a hate group. It’s named for Virginia Dare, said to be the first English child born in the New World.

When Kobach appeared on a PBS program defending Trump against former RNC chief Haley Barbour, the website was delirious in its praise:

“In a GOP party that was living up to its professed principles, people like Kobach, and not Barbour, would be running things,” a writer for the site enthused, describing Kobach as “a stalwart warrior against the illegal immigrant invasion.” The post also appeared at the neo-Nazi site The Daily Stormer, whose founder has endorsed Trump.

As you can see Kobach and Trump have a lot in common.

Kobach did not appear on any list for VP, but he was an important voice at the recent platform drafting committee meetings where he made sure that his draconian immigration agenda was adopted thus ringing another death knell for any hope of Republican outreach to the Hispanic community.He was adamant about Trump's wall, insisting that it "must cover the entirety of the southern border.” And he was very clear about what kind of wall it has to be. According to The Wichita Eagle:

Former Texas Gov. Rick Perry said this week that Trump’s wall will actually be a “digital wall” meant to prevent immigration, rather than a physical barrier. Kobach rejected that notion.

“The wording I chose makes very clear that it must be a physical wall,” Kobach said, explaining that under President George W. Bush, some officials supported the use of electronic sensors at the border instead of a physical wall, an idea he deems insufficient.

There's no word on whether upon hearing Perry's suggestion that he wasn't serious,  Trump repeated his favorite line, "the wall just got 10 feet higher."

But building the wall is not the only issue on which Trump and Kobach are simpatico. Kobach served in the Bush administration and was instrumental in the implementation of the National Security Entry-Exit Registration System, the post 9/11 requirement that all Muslims and Middle Eastern citizens in the country on visas register and file their fingerprints with the government. With his plans to deport Syrian refugees, ban Muslims from immigrating and surveilling mosques, Trump could certainly use a man with that kind of expertise on his team.

Kobach's other area of interest is on the subject of vote suppression where he has also had great influence on the state level by helping to draft laws to thwart non-existent voter fraud, an issue Trump has also said he considers to be a serious problem. He has said, “I want to see voting laws so that people that are citizens can vote, not so people that can walk off the street and can vote, or so that illegal immigrants can vote...You’ve got to have real security with the voting system. This voting system is out of control. You have people, in my opinion, that are voting many, many times.”

He's a perfect choice for a Trump administration. Indeed, his other contribution to the platform draft could have come right out of the Trump campaign itself. As the president was giving his eulogy for the five slain police officers in Dallas this week, Kris Kobach offered a provision that states that the Republican Party opposes all laws that would restrict magazine capacity, ban AR-style rifles or “deprive a person from the right to keep and bear arms without the right to due process.” It passed without debate.

Kobach said the provision is a “reaction to what some Democrats have been doing every time there’s a terrorist attack in the United States. Instead of talking about defeating ISIS, they use the terrorist attack as an excuse to go after Americans’ guns." Trump couldn't have said it better himself.