Will Republicans listen to one of their own? The Senate’s only black Republican reveals his own experiences with racial profiling 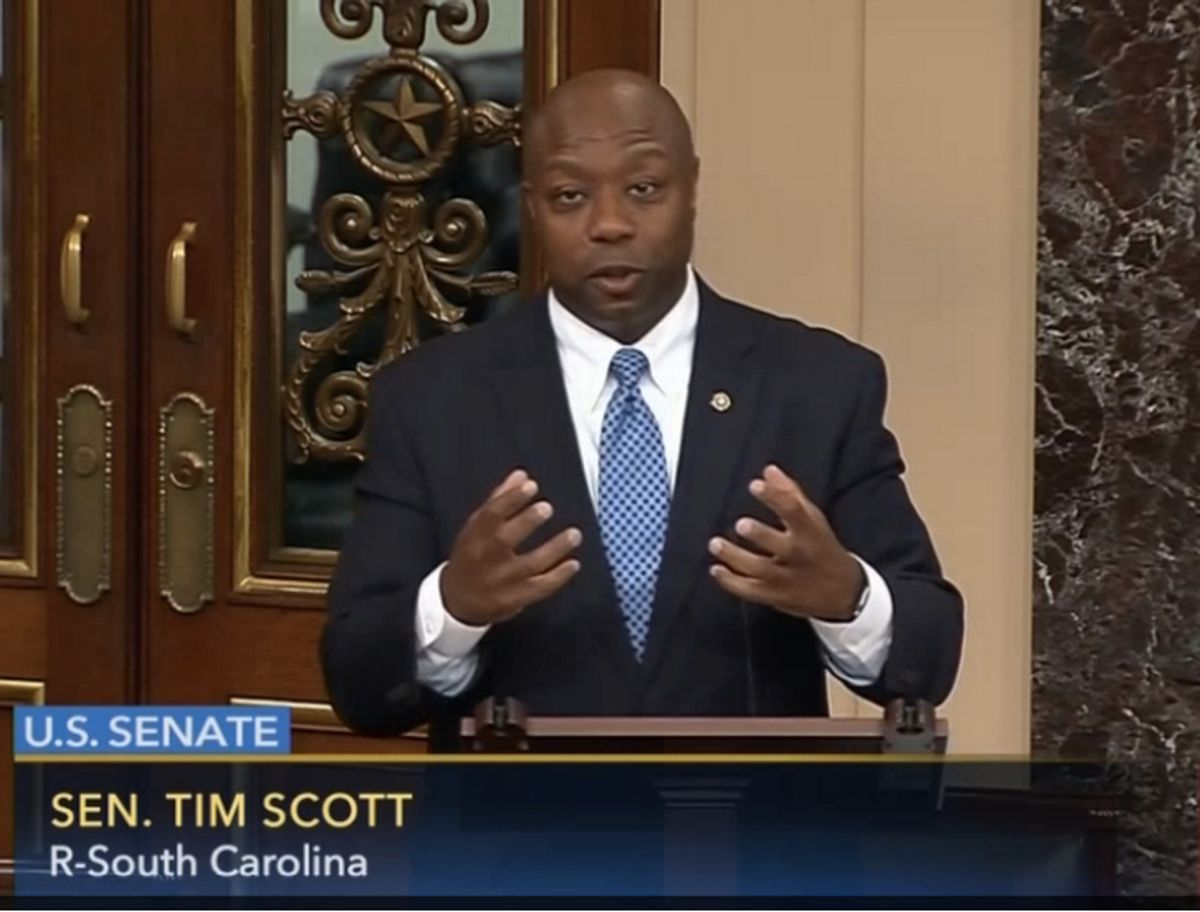 The United States Senate has only two serving African-Americans. Both men, one Democrat and one Republican.

In the wake of yet another string of recorded police killings of African-American men this week, the Senate's lone black Republican took to the floor to get real about race in a chamber that had done its best to ignore it.

"I have felt the anger," South Carolina Senator Tim Scott explained to his colleagues on Thursday, referring to the national protests against racial profiling in policing. "I've experienced it myself," he admitted, going on to tell his fellow senators that he had been stopped by law enforcement seven times in one year.

"Was I speeding sometimes? Sure. But the vast majority of the time I was pulled over for driving a new car in the wrong neighborhood or something else just as trivial":

I recall walking into an office building just last year after being here for five years on the Capitol. And the officer looked at me with a little attitude and said, 'The pin I know, you I don't, show me your ID,'" the Senator said. "I was thinking to myself either he thinks I'm committing a crime, impersonating a member of Congress, or what? Well, I'll tell you that later that evening, I received a phone call from his supervisor apologizing for the behavior.

Scott told South Carolina's Post and Courier before his speech that he was “surprised” by the silence from his Republican colleagues in the wake of the police killings of two black men, Alton Sterling and Philando Castile, while nearly all released statements on the murder of Dallas police officers. Scott's fellow Republican Senator Pat Tommey of Pennsylvania recently bemoaned that complaints of police brutality and over-criminalization are "this narrative” that “the police are systemically a bunch of racist rogues.”

But during his speech, the second on policing and race this week, Scott also shared the story of a staffer who was "pulled over so many times here in D.C. for absolutely no reason other than driving a nice car." The staffer eventually traded in his Chrysler for a "more obscure form of transportation" because "he was tired of being targeted."

He asked his Senate colleagues to "imagine the frustration, the irritation, the sense of a loss of dignity that accompanies each of those stops."

"I do not know many African-American men who do not have a very similar story to tell no matter their profession. No matter their income, no matter their disposition in life," he said. "There is absolutely nothing more frustrating, more damaging to your soul than when you know you're following the rules and being treated like you are not."

"Recognize that just because you do not feel the pain, the anguish of another, does not mean it does not exist," the Republican reminded his fellow conservatives.

"I wept when I watched Walter Scott turn and run away and get shot and killed from the back," he revealed, referring to shooting death of an unarmed African-American man in South Carolina last year.

Scott told the New York Times that after the racially motivated shooting at an African American church in Charleston, South Carolina, last year he was stopped by the police numerous times while a member of the Charleston County Council, including a time when several cars approached him, “lights blazing,” as he drove his car through “the ghetto” to visit his grandfather.

Scott, who is not known as the most vocal Republican in the Senate, is validating the experiences and frustrations voiced by Black Lives Matter, a movement dismissed by many Republicans, including presumptive presidential nominee Donald Trump, who "feel that it is inherently racist.”

“The political reality is, to some extent, Republicans need a Tim Scott, and they need him to move the needle on these issues," Marc Morial, the president of the National Urban League, told the Times.