Buying "Ghostbusters" — or not: How buying in or boycotting a summer family movie became a political act 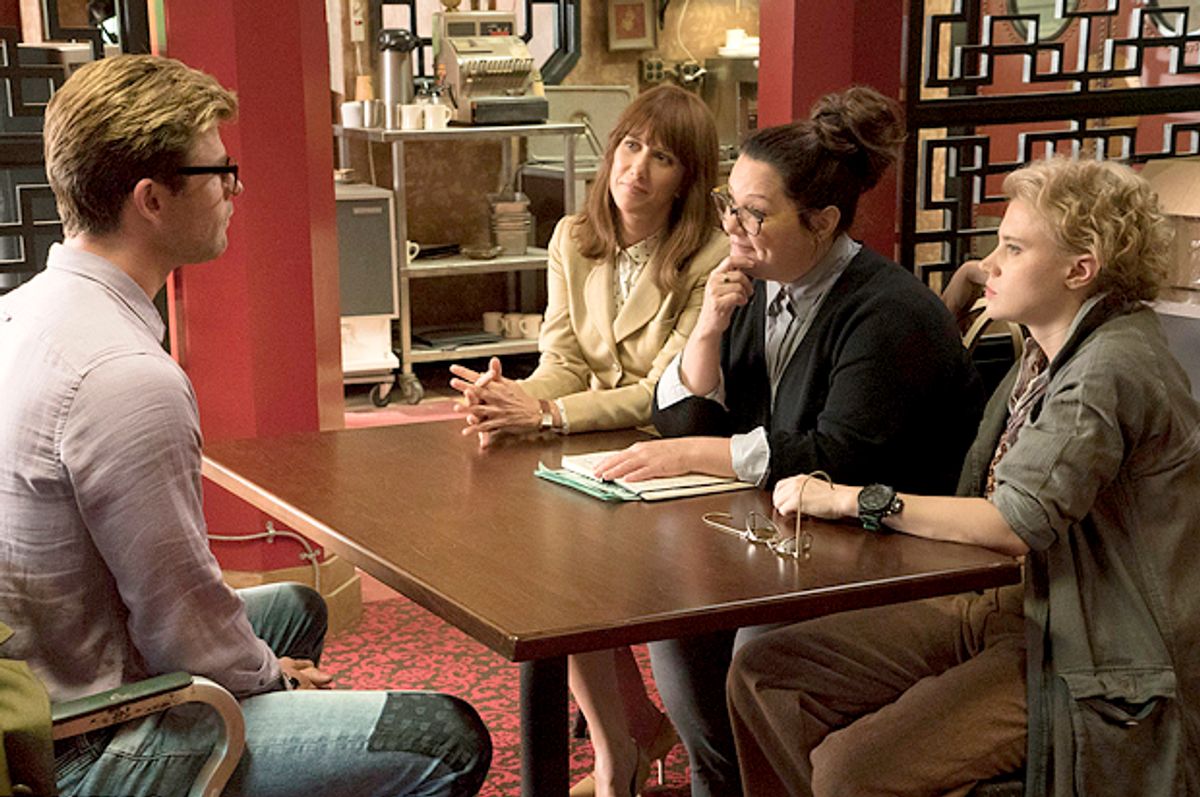 Watching the “Ghostbusters” reboot was like going to McDonald’s. It is disposable, thoroughly enjoyable and distinctly American mass-produced entertainment. I savor the flavor of a Big Mac with the same casual attitude that I and the others attending my screening chuckled throughout this movie. This makes it all the more remarkable that it has been inextricably linked with controversy over gender politics and nostalgia culture that, really, demonstrate one thing: We have become a society of consumers, defined by the political as well as cultural brands we buy and buy into.

When you dissect the controversy related to the “Ghostbusters” reboot, it predominantly stemmed from two sources. One was undeniably misogynistic, a knee-jerk reaction against seeing such a major franchise associated with women, thanks to gender conservatives being used to seeing only 15 percent of movies star female protagonists. The other was the one focused on by James Rolfe (i.e., Angry Video Game Nerd), who mainly complains that he wanted a movie that continued the initial franchise and hinted that it was disrespectful to reboot the property with a title that could confuse it with the original film.

These two sentiments, combined with a trailer so maligned that it quickly became the most unpopular in YouTube history, created a perfect storm of attention surrounding this movie. You could be drawn into the nostalgia for a beloved blockbuster franchise (as well as those inclined to dislike them), or you could take symbolic stands on the intersection of gender politics with popular culture … left or right-wing.

As far as the politics are concerned, it means we should be relieved this movie isn’t terrible, as the outright misogynists said it would be. It has a 75 percent rating on critical aggregate RottenTomatoes and a 60 rating on Metacritic and, though not likely to supplant "The Secret Life of Pets," is still poised to garner respectable box office results this weekend. Then again, what does it say that we would consider it a setback — or at least highly unfortunate — if the movie was considered to be an embarrassment? What if it actually had been terrible … Could we be honest with our own tastes without being labelled as sexists?

The resulting movie was, based on my viewing, a product perfectly calibrated to avoid that outcome. It aims to be a good family film for the summer movie season, and it fits right in with the buttery popcorn I ate while watching it. Melissa McCarthy, Kristen Wiig, Kate McKinnon, Leslie Jones and Chris Hemsworth were easily the best thing about the film, and any promise the franchise has in the future will rest on capitalizing on their chemistry and allowing them to improvise. As such, in terms of delivering a quality “Ghostbusters” product, it’s hard to really complain about this film on its merits.

Hence it addresses the gender politics angle of its inception through juxtaposition gags (the leered-at target of sexual objectification is a man played by Chris Hemsworth) and some swipes about negative message board comments and virginal misanthropic nerds. It also, admirably, creates a story in which the female protagonists’ gender matters not much at all to how the plot unfolds. All of this is commendable, although in my opinion done better in other female-led franchises (“Aliens,” “The Hunger Games,” “Frozen”).

Similarly, James “Angry Video Game Nerd” Rolfe has no reason to be upset at the idea of needing to ask whether the term “Ghostbusters” hereafter refers to this movie or the 1984 one. It pays due homage to the original … because of course it would. Those references to Slimer, the Stay Puft Marshmallow Man, the logo, the theme song and other aspects of the “Ghostbusters” brand are necessary to draw in the nostalgia audience. That’s how you connect a reboot to an existing franchise. It’s what one of the most successful rebooted franchises, Christopher Nolan’s Batman trilogy, did in its own melodramatic and cerebral way — although as reboots go, “Ghostbusters” struck me as qualitatively closer to the most recent “Star Trek” efforts.

If the bottom line is that Sony can get your money by making you want to see a new film associated with the “Ghostbusters” brand, so be it. If they get you because you enjoy the style of comedy provided by Paul Feig, Melissa McCarthy, et al, so be it. If a bunch of misogynists overreact to the film and they can sell tickets through a desire to express solidarity with the case of gender representation in cinema, all the better. The real story here is that “Ghostbusters” demonstrates just how effectively we have been segmented, culturally and politically, through the brands with which we identify. As a result we have so commodified culture and politics that purely consumerist decisions feel more meaningful than they really are.

For what it’s worth, at the screening I attended, young people seemed to get more out of it than the older ones, but most of the thirty or so people there chuckled consistently laughed at the jokes, myself included. The movie is a solid B. And yet it has and will no doubt continue to elicit fulsome praise and bigoted denunciations alike, regardless of its quality, because that is how our culture has trained us to react to the various cultural and political nerves that this film triggers. This, I suspect, is the real story behind the “Ghostbusters” reboot.