Cashing in on the RNC: Clevelanders are making a buck on Airbnb — but will they get rich quick? 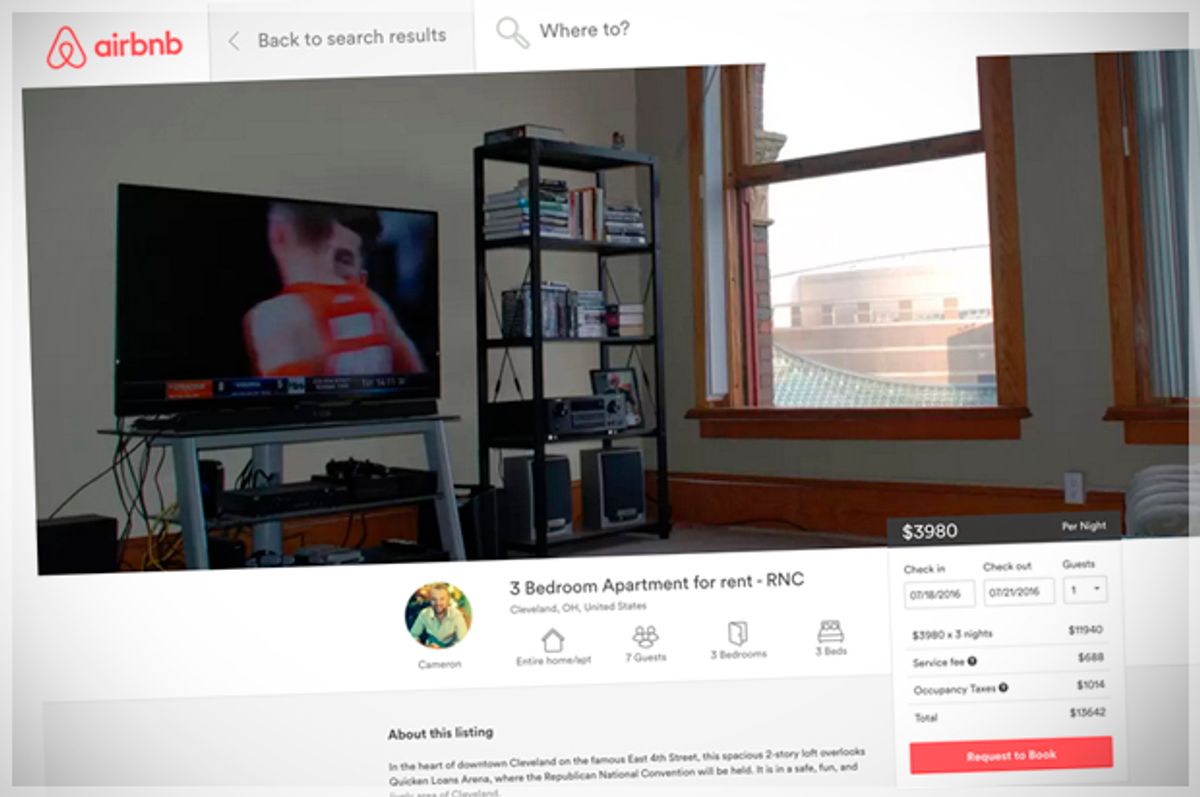 The Cleveland host committee responsible for organizing next week's Republican National Convention claims that the four-day event will draw $200 million in spending to northeast Ohio. But many Clevelanders are hoping that the RNC will bring them a much more direct form of economic impact.

Cleveland residents hoping to make a quick profit have taken to Airbnb.com to rent out their homes, apartments, and empty rooms to the 50,000 visitors expected to flood the city for the July 18-21 GOP convention. The short-term rental site, which connects users seeking to rent homes with users in need of accommodations, expects 1,300 to 1,400 guests to rent through its service for the RNC, a 400% increase compared to the weeks before and after the convention.

With nearly all Cleveland hotel rooms fully booked months in advance of the RNC, rental services like Airbnb offer an alternative for would-be conventioneers looking for a last-minute place to stay.

Airbnb's search function shows that the average asking price of a rental in Cleveland for the dates of the convention is $899 per night, as of Thursday. For context, the 2014 American Community Survey (the most recent year for which data is available) estimated median housing costs for Cleveland renters at $661 per month.

However, Cleveland's high average listing price for convention week doesn't necessarily reflect the rates rentals are actually being booked at. An Airbnb spokesperson told Cleveland.com this week that the median nightly booking price is just $260, meaning most listers won't be getting rich quick.

That hasn't discouraged some users from seeking rates as high as $10,000 per night, particularly for apartments in the direct vicinity of convention venue Quicken Loans Arena.

This downtown two-bedroom apartment, listed at $4,500 per night, offers views of the arena and comes complete with a suit of armor (which visitors might consider donning before venturing outside among the thousands of expected protesters that Cleveland prepared for by purchasing 2,000 police riot control suits): Airbnb says that nearly 60 percent of Cleveland hosts are renting their homes through the site for the first time, and many are marketing their postings directly towards convention visitors, with titles like "Luxury 1 Bedroom Close to RNC" and "Perfect RNC Apartment."

Even the Democratic mayor of a Cleveland suburb is getting in on the action, listing his five-bedroom home for $1,000 per night.

Airbnb recently started collecting local taxes on short term rentals in Cleveland, ensuring that city and county governments will see a share of the revenue driven by the convention.

Andy and Cristin Lukcso are among the Airbnb first-timers seeking to capitalize on the RNC. The couple hopes to rent their one-bedroom condo in downtown Cleveland for $700 per night.

"When all of these rumblings about the RNC occurred about a year ago, everybody was saying you could rent your place out and get a ton of money," Andy Lukcso told Salon. "I was always a little skeptical because I just didn't know how much the demand would be."

Lukcso said he'd factored a slight premium into his asking price compared to other rentals in the area because he had just finished renovating the condo and would still need to stage it for rental. He said he'd received inquiries from a few potential renters but hadn't finalized anything yet.

"I'm a businessman," Lukcso said. "It just comes down to dollars and cents. I'd like to at least net out three or four grand after expenses, so I'd only rent it out for the week."

"I expected a little bit more interest, but I kind of threw this together at the last minute," he continued. "Hopefully it gets rented, but if not it's going on the market for sale anyway."

Airbnb listings in Cleveland range from luxurious to modest to just plain weird. For just $50 per night, convention-goers can rent the top floor of this eccentrically decorated bungalow promising a "Tropical paradise in west Cleveland," which comes with a tiki bar, some interesting taxidermy, a bedroom that doubles as a country music hall of fame, and its own hashtag — #DavidesTropicalParadise: Four Snapchat stars will squeeze into the 585-square feet"Cleveland's first permanent tiny house" for the duration of the RNC before the house is listed on Airbnb for the rest of the summer at $85 per night. Snapchatters Mark Kaye, Ali Spagnola, Wysamx and Audrey Spencer will cover the convention on the app in partnership with Cleveland.com reporters while living in the small, but eco-friendly space.