Cornel West, a Sanders appointee for the Democratic Party platform, slammed Hillary, Trump and Obama in an op-ed 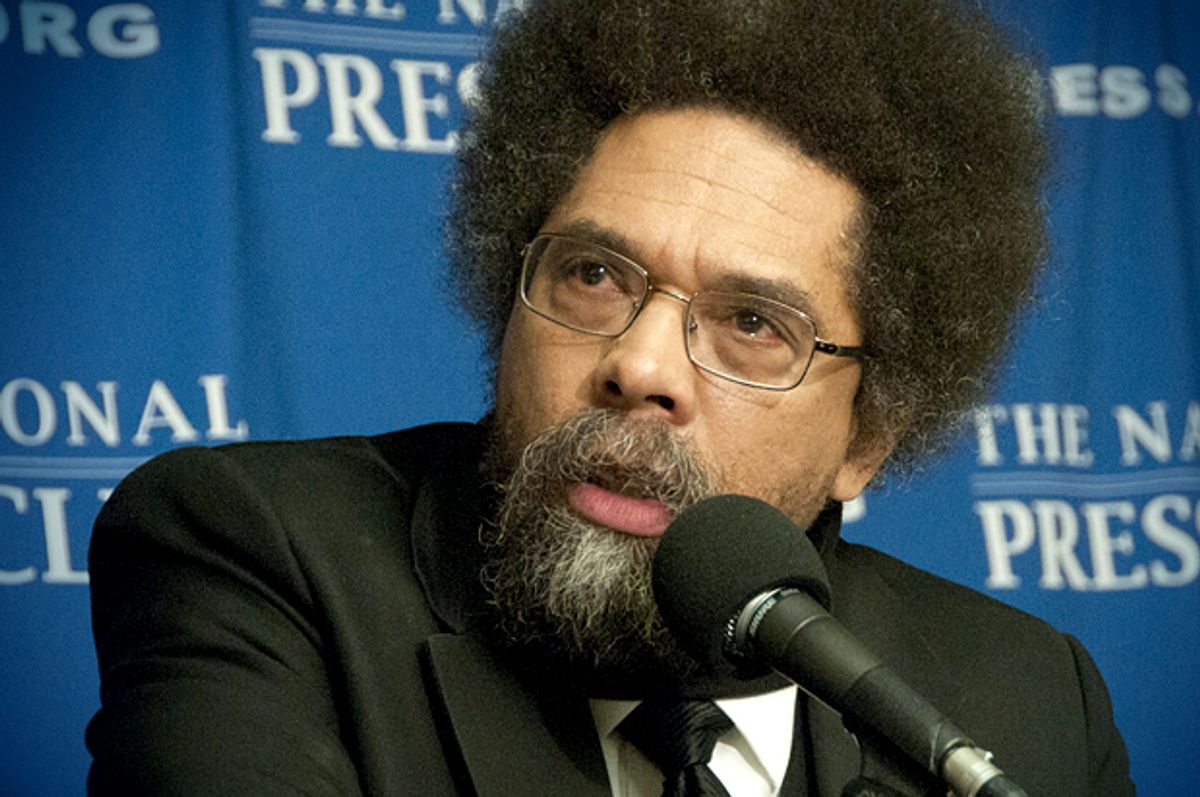 "I am with her – the only progressive woman in the race," said Cornel West.

"This November, we need change. Yet we are tied in a choice between Trump, who would be a neo-fascist catastrophe, and Clinton, a neo-liberal disaster. That’s why I am supporting Jill Stein."

"There is also a sense that the Clinton policies helped produce the right-wing populism that we’re seeing now in the country," West added. "And we think she’s going to come to the rescue? That’s not going to happen."

Jill Stein has herself argued the same. “The terrible things that we expect from Donald Trump, we’ve actually already seen from Hillary Clinton,” she said in June. “Putting another Clinton in the White House is only going to make that right-wing extremism greater.”

In his op-ed, West echoed what he told Salon in an interview in May. “Just to tell the truth, Trump is a narcissistic neo-fascist in the making, and you just have to say that. That’s what it is,” he said, blasting the corporate media for fueling the rise of the GOP front-runner and describing him as the out-of-control Frankenstein’s monster who is “coming back to haunt you.”

“Hillary Clinton is a milquetoast neoliberal” who is pushing for “hawkish policies around the world; you just have to say that,” West added. He excoriated the capitalist system and the “big money” that rules society for leaving Americans with the choice between Clinton and Trump.

Clinton surrogates voted against platform amendments proposed by Sanders appointees calling for opposition to the Trans-Pacific Partnership, a ban on fracking, a condemnation of the illegal Israeli occupation of the Palestinian territories and more.

West condemned the Democratic platform for its failing on these basic left-wing issues.

"I have a deep love for my brother Bernie Sanders, but I disagree with him on Hillary Clinton," West wrote in the op-ed.

This week Sanders' supporters accused him of betraying his "political revolution" by not only endorsing Clinton for president, but also by actively campaigning for her and claiming she "will make an outstanding president."

"I don’t think she would be an 'outstanding president,'" West rejoined. "Her militarism makes the world a less safe place."

Clinton, who voted and enthusiastically pushed for the invasion of Iraq, played leading roles in the NATO bombing of Libya, which plunged the country into chaos in which extremist groups including ISIS have flourished, and the U.S. policy in Syria.

The New York Times, which endorsed Clinton for president, acknowledged that she is more hawkish than Republican leaders, calling her "the last true hawk left in the race."

West said the U.S. empire is in decline, and stressed that the "levels of wealth inequality and environmental degradation is grotesque."

"Tell the truth about what is going on. Bear witness. Be willing to go to jail to fight for justice if need be," West advised.

In his op-ed, West also criticized President Obama for failing to take more action against systemic racism and police brutality.

West said that, for seven years, he and other activists have pressured Obama not to ignore issues of poverty, police abuse and mass unemployment, but their calls have fallen on deaf ears.

"Obama and his cheerleaders should take responsibility for being so reluctant to engage with these issues," West wrote.

West noted that President Obama did not visit Baton Rouge, Louisiana, where hundreds were arrested protesting the brutal police killing of Alton Sterling; nor did he go to Minneapolis, during mass demonstrations against the fatal police shooting of Philando Castile.

"He flew over their heads to go to Dallas. You can’t do that. His fundamental concern was to speak to the police, that was his priority," West wrote.

"When he references the Black Lives Matter movement, it’s to speak to the police. But the people who are struggling have a different perspective," he added.

For years, West has been an outspoken critic of President Obama, condemning his drone program, which has killed hundreds of civilians, his centrist economic policies, his bailout of banks after the 2008 crash and his steadfast support for Israel, despite its harsh repression of the Palestinians.

"Unfortunately, Obama thrives on being in the middle. He has no backbone to fight for justice. He likes to be above the fray. But for those us who are in the fray, there is a different sensibility," West wrote.

"You have to choose which side you’re on, and he doesn’t want to do that. Fundamentally, he’s not a love warrior. He’s a polished professional. Martin Luther King Jr, Adam Clayton Powell Jr and Ella Baker – they were warriors."

West added, "Obama’s attitude is that of a neo-liberal, and they rarely have solidarity with poor and working people. Whatever solidarity he does offer is just lip-service to suffering but he never makes it a priority to end that suffering."