They “started charging into the crowd and tackling people," said Max Geller, who was injured and arrested by cops 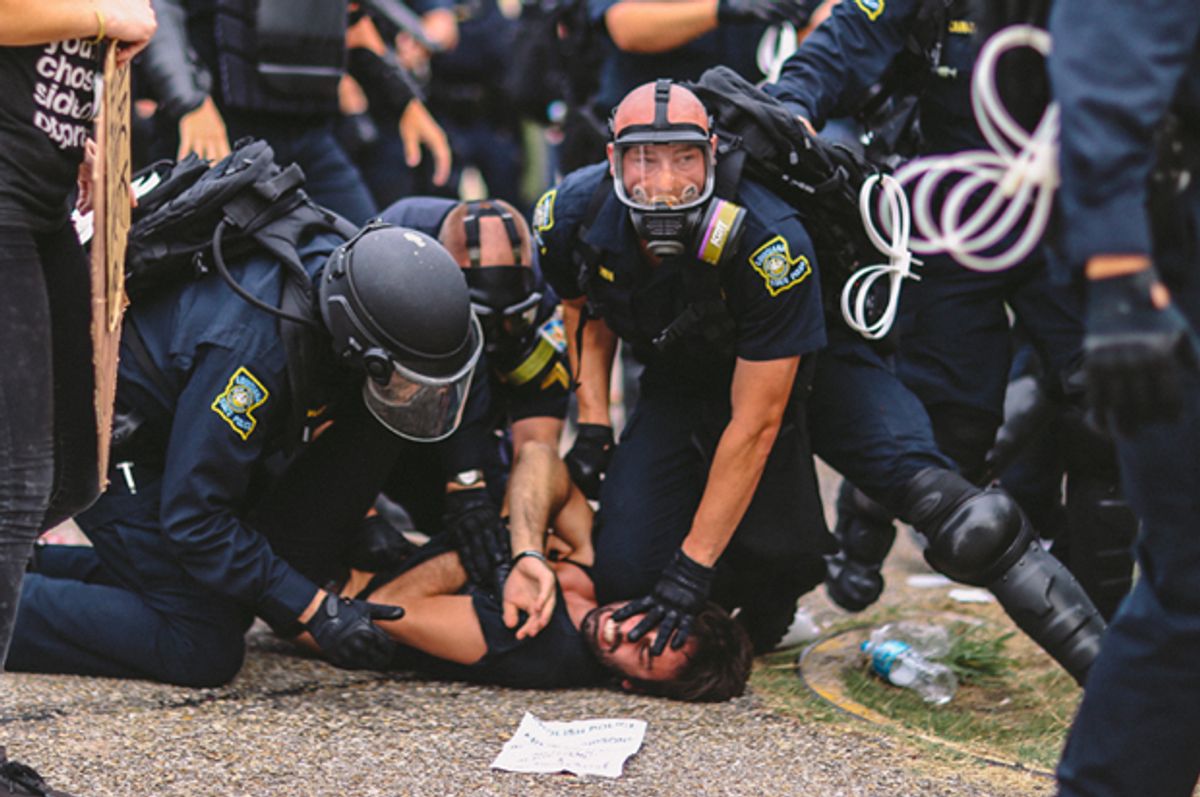 A good way for a white person to get a taste of the police brutality that appears to be routine for black people in Baton Rouge is to protest against it in the streets. And so I was not exactly surprised to see a photograph of a police officer grabbing the face Max Geller —  an activist and performance artist of sorts for causes ranging from Palestinian freedom to the horribleness of the painter Renoir, and a friend of mine from high school — during protests against the police killing of Alton Sterling.

Last Sunday, Baton Rouge police officers charged a crowd of protesters, posing no obvious threat and gathered in a residential neighborhood, and threw Geller to the ground. One then grabbed his face and appeared to slam his head into concrete. This is all on video.

“It wasn’t clear that they were going to march on us until they started moving,” said Geller, who joined a group of white protesters to form a barricade between police and black activists. They “just started charging into the crowd and tackling people.”

Geller tells me that he was dragged behind an armored vehicle emitting painful sounds from a seeming long-range acoustic device and then hit on his head with a blunt object and knocked unconscious. At the hospital, he was diagnosed with a concussion. He sat in handcuffs, he says, mockingly asked by police if he was homeless.

Geller’s account echoes the allegations laid out in a lawsuit filed by the American Civil Liberties Union of Louisiana and groups including North Baton Rouge Matters and Black Youth Project 100 charging that police used excessive force, pointed live automatic weapons at protesters, arrested legal observers and journalists without probable cause, and subjected protesters to indiscriminate mass arrest — all to intimidate them from protesting excessive force in the future.

The lawsuit charges that protesters “engaged in this peaceful speech, association, and protest on the streets, sidewalks, and medians of Baton Rouge” were “met with a military-grade assault on protestors’ bodies and rights.”

It was “very aggressive, very militaristic,” says Daiquiri Jones, 27, a black protester from New Orleans who met Geller in detention. Jones says he was standing on the sidewalk recording video of police assaulting and arresting protesters who had gathered on private property, in front of a house, at the owner’s invitation, when another group of police rushed up behind and threw him to the ground. “It felt like an ambush.”

Protesters, as alleged in the lawsuit, were given contradictory orders to disperse from an area that was difficult to escape from because it was surrounded by police.

Jones says that police ordered him to put his hands behind his back but that he couldn’t do so, because they were under his body, which was being pressed into the ground by police.

“No one was standing in the actual street,” says Jones. “It was a residential neighborhood. There was no traffic at all.”

In detention, both Geller and Jones say they were shown a video about prison rape that was designed more to frighten than protect, and strip searched. While undergoing his search, Jones says that he was threatened with mace if he didn’t comply. According to the lawsuit, other protesters report being maced or pepper sprayed in prison for making comments or singing songs. Geller says that multiple requests to see medical personnel were ignored for hours even though he was bleeding from his head.

In response to the lawsuit, a Baton Rouge Police Department spokesperson told The Advocate that they don’t comment on pending lawsuits.

You can take some guesses as to why. When journalists are arrested — and when two ACLU of Louisiana employees allege they were given an unlawful order to disperse and threatened with arrest — the police are strongly suggesting that they hold constitutional rights across the board to be of little import.

The Baton Rouge police have an ugly history of abuse, according to Times-Picayune writer Jarvis DeBerry. Numerous law enforcement officers from other departments who came to Louisiana in the wake of Hurricane Katrina charged that local officers “were engaging in racially motivated enforcement, that they were physically abusing prisoners and the public and that they were stopping, questioning and searching people without any legal justification.” One allegedly “attempted to thank” a visiting officer “for his help by letting him ‘beat down’ a prisoner.”

Since heavily armed police rolled through the streets of Ferguson in 2014, making global headlines for their military-style occupation of an American city, other police departments have made efforts to show restraint and de-escalate potential conflicts at protests against police killings. Not so in Baton Rouge. From the videotaped killing of Alton Sterling to the police riot against protesters that followed, the world is watching Baton Rouge cops. So far, they don’t seem to care.