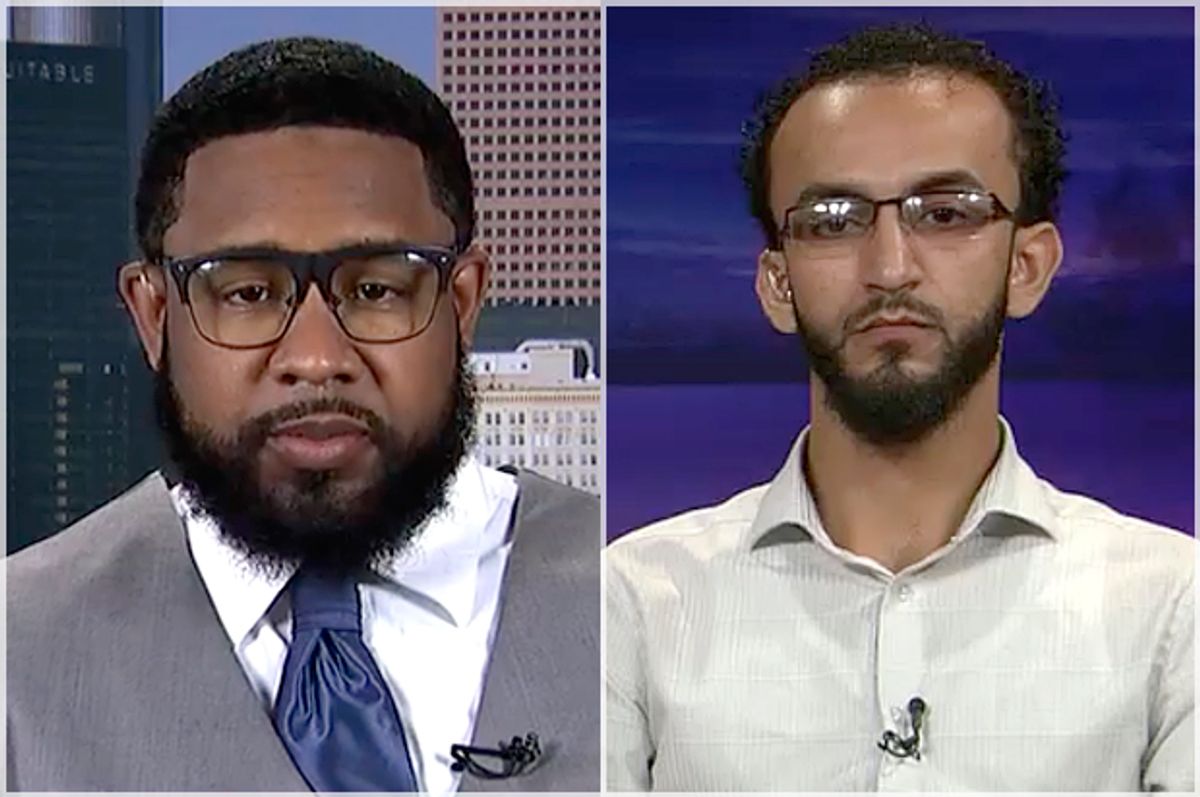 Hundreds of protesters have been arrested throughout the U.S. in the past week, in demonstrations against police brutality and systemic racism.

The videos of the brutal police killings of Alton Sterling in Baton Rouge, Louisiana, and Philando Castile in Falcon Heights, Minnesota have reinvigorated the Black Lives Matter movement.

But the bystanders who filmed and distributed the videos of the shooting of Alton Sterling say they have been detained and harassed by police for exposing the incident to the world.

Moreover, the man who filmed the killing of Eric Garner, an unarmed black father who died after being placed in a chokehold by an NYPD officer two years ago this week, is heading to prison for four years on unrelated charges, after he says he has endured constant police harassment.

This bystander who recorded the viral video of Garner's death is the only one connected to the incident who is being locked up; none of the officers involved have faced jail time. While the city's medical examiner determined Garner's death to be a homicide, the Staten Island district attorney declined to press charges.

In Baton Rouge on July 5, Abdullah Muflahi, the owner of the convenience store where Alton Sterling was killed, filmed the fatal police shooting on his cell phone.

His video shows a white police officer pinning Sterling to the ground and shooting him point-blank in the chest multiple times, killing him.

Muflahi is now suing the city of Baton Rouge, the city's police department and four of its officers.

In his lawsuit, Muflahi says police confiscated his entire surveillance camera system, including the equipment and the footage, without a warrant. The suit also accuses the police of taking his phone, locking him for four hours in the back of a hot police car, detaining him for two hours in the police headquarters and preventing him from calling his family or an attorney when he was detained.

Democracy Now has done very detailed coverage of these stories. The news outlet interviewed Muflahi and his attorney, Joel Porter.

Muflahi recalled that, before he started filming the attack on Sterling, the police officers were "slamming him on top of a car and were tasering him. That’s when another officer ran and tackled him onto an SUV, then both cops slammed him on the floor."

After shooting Sterling, one of the officers then shouted out, "Just F**k him. Just let him lay there," Muflahi said.

"After they had killed him, one of the officers got up and grabbed me," Muflahi narrated. "And when backup had arrived, he grabbed me and pushed me towards another officer and told him to put me in the back of a car."

"I was in shock. I didn’t know if it was real or if I was in a nightmare," he added.

The police then asked Muflahi if they could go into his store and copy the surveillance footage. Muflahi said that he would like to be present if they were going to do that. The police told him that he was not allowed to do so, and entered his story anyway, without his permission and without a warrant.

Since releasing the video to the media, Muflahi has received death threats.

Joel Porter, Muflahi's lawyer, also told Democracy Now that the police "violated his rights in many ways." Porter accused the police of illegally detaining Muflahi for six hours and for commandeering his business during that time.

Porter says the police did not know Muflahi filmed the shooting on his cellphone. Otherwise, they would not have given it back.

In an interview with local media, Muflahi, who was born in Yemen and raised in the U.S., said, “We just need to stick together — no matter what race we are, no matter where we are from.”

Muflahi was not the only one who says he has been harassed by police. Chris LeDay, a U.S. Air Force veteran and musician who distributed the other video of the police shooting of Sterling, also says he was detained.

LeDay, who is from Baton Rogue but now lives in Atlanta, obtained video of the attack from a friend of the friend. He posted it to the internet, sharing it with his thousands of followers on social media, and it quickly went viral.

Although LeDay no longer lives in Louisiana, he soon faced backlash from police. After the video was widely circulated, LeDay says police detained him at his job at Georgia's Dobbins Air Reserve Base.

Police held LeDay for 26 hours, and then released him after he paid $1,200 in traffic fines. LeDay told Democracy Now in another interview that he is afraid he could lose his job.

When the police approached him, LeDay asked, "Am I being detained?" The officer said yes, but would not tell him why. LeDay stressed that this is illegal.

The cop then returned and claimed LeDay was being detained on assault and battery charges, although the authorities later conceded that this false, never mentioning the charges again.

The story soon changed, and they told LeDay he was actually being detained on unpaid traffic tickets. Police handcuffed LeDay and shackled his legs and took him to jail.

"Nobody sets up a sting operation to detain somebody for traffic tickets," he told Democracy Now.

The police told LeDay that he had no bond and would have to wait in jail for a week before seeing a judge. LeDay contacted a family member who is a lawyer and managed to be released after paying $1,200 in fines.

"It was an atrocity," LeDay said of the Sterling shooting. "It was a clear-cut case of murder."

LeDay stressed that Louisiana is plagued with corruption and has the highest prison rate per head in the world.

"Us as being black men in this country, especially in Louisiana, it feels like it’s almost illegal to be black," he told Democracy Now.

Muflahi and LeDay are not the only civilians who have faced police crackdown for filming killings.

Ramsey Orta filmed an NYPD officer putting unarmed black father Eric Garner in a chokehold on July 17, 2014. Orta's video shows Garner saying "I can't breath" nearly a dozen times before dying in what the medical examiner ruled to be homicide.

In the two years since, Orta says he has been constantly harassed by police, whom he has accused of fabricating charges.

Last week, Orta took a plea deal on unrelated weapons and drug charges. He will now be heading to prison for four years, making him the only person at the scene of Garner's killing to face time behind bars.

In an interview on Democracy Now in January, Orta said that, since sharing the video with the media, "I’ve just been harassed."

"I’ve been almost killed in Rikers Island," he said. He has been imprisoned there twice, for 30 and 60 days. During the 60-day term, he went on the hunger strike.

Orta is worried that his food was poisoned at Rikers, and remains concerned that he could be poisoned in his upcoming imprisonment.

In 2015, laboratory testing confirmed that there was rat poison in the food at Rikers Island. New York City's Department of Correction was sued on behalf of 19 inmates who were sickened by poisoned meatloaf.

Roger Wareham, the attorney representing the family of Delrawn Small, another unarmed black man killed by an off-duty police officer in Brooklyn, New York on July 4, stressed in another interview with Democracy Now that videos of police shootings are absolutely crucial, as Salon previously reported.

Early media reports on the shooting of Small uncritically echoed the police’s version of the incident, before video exposed it to be false.

Wareham emphasized that, when there is not footage of these police attacks, there is virtually no attention to them. “It’s almost as if, if there is no video, there is no crime committed.”