Georgia O’Keeffe and the gender debate: Can a woman be great, or only a great woman? 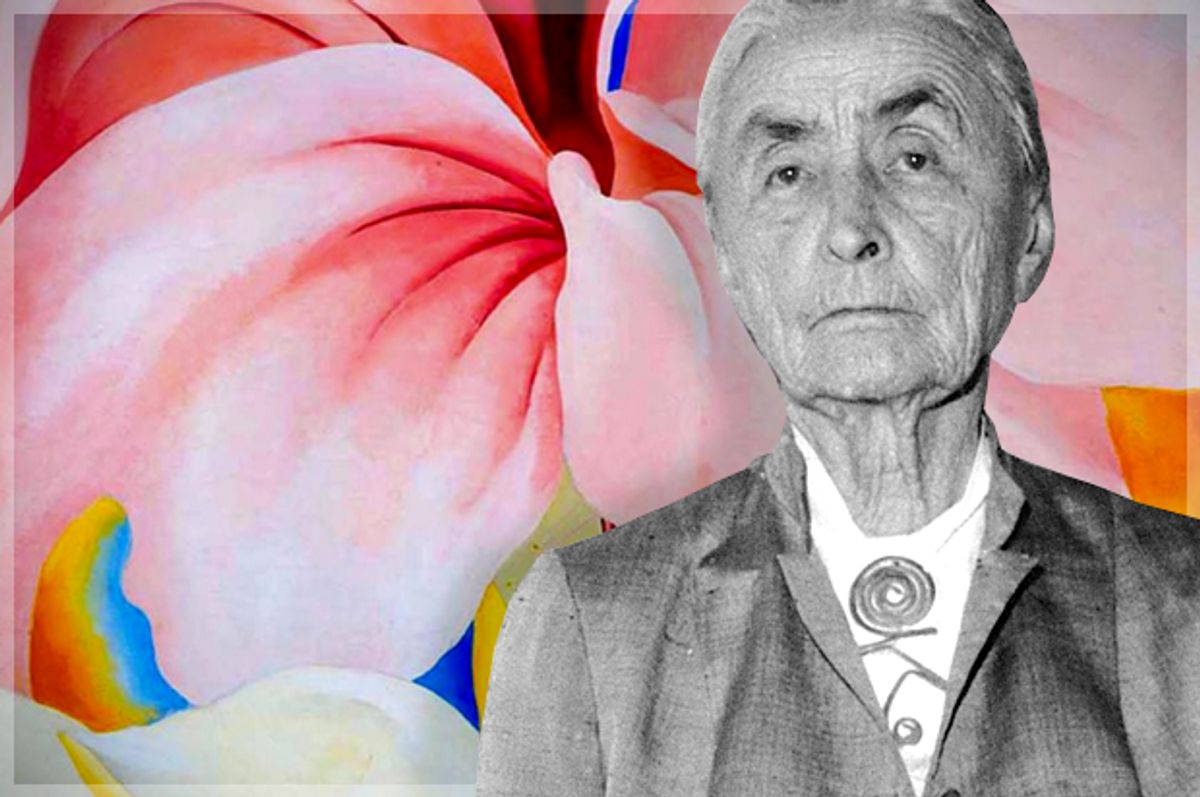 On July 6, 2016, doors opened to a retrospective of Georgia O’Keeffe’s work at the Tate Modern in London, where more than 100 of O’Keeffe’s paintings, spanning six decades, are now on display. In addition, an adjoining room focuses on select portraits Alfred Stieglitz photographed of O’Keeffe, many of them nudes.

Georgia O'Keeffe made her mark as an American artist with paintings of oversized flowers, sun-bleached bones, and curvaceous landscapes. For a century, and possibly because of Stieglitz’s influence, her work has carried with it the interpretation of depicting female genitalia, and emphasizing sexual themes. Throughout her lifetime, O'Keeffe denied her art had anything to do with the female form. This summer, 100 years after the first exhibition of her work, we have the opportunity to take a fresh look atO’Keeffe’s work and the opinions which first shaped it, and see her work anew.

The Tate Modern displays this quote:

Men put me down as the best woman painter…
…I think I’m one of the best painters.
—Georgia O’Keeffe

The Tate is setting the stage to help settle the debate. Is Georgia O’Keeffe the best woman painter or one of the best painters, gender not considered?

O'Keeffe's story is an interesting one. Stieglitz “discovered” O’Keeffe in 1916, when she sent charcoal sketches to a friend, Anita Pollitzer, in New York City. Though O’Keeffe asked Pollitzer to dispose of them, she couldn’t, and instead took them to noted art dealer and agent, Alfred Stieglitz, to see what he thought of them. He fell in love. He exhibited the sketches in his gallery, Gallery 291, without O’Keeffe’s consent.

Soon, O’Keeffe traveled from Texas, where she was a schoolteacher, to New York, to confront him — he, married and 23 years her senior. He convinced her to be a subject for his photography, which developed into nude portraits, and in 1919, Alfred Stieglitz exhibited photographs he took of O’Keeffe. Certainly, O'Keeffe could not have understood the immense effect they would have upon the interpretation and reception of her own paintings — at least, not as Stieglitz did. He convinced her they would stir up a reputation, and that, the nudes did. His influence on her work continued, and for decades, Stieglitz positioned O'Keeffe's art and her image to be overtly sexual, to raise an eyebrow and hold attention the way he wanted O'Keeffe to be received. O’Keeffe’s is a story before its time.

The Tate Modern isn’t the only reassessment of O’Keeffe to hit the world this year. In February, Random House released "Georgia" by novelist Dawn Tripp — a fictionalized (and by some accounts feminist) interpretation of O’Keeffe’s story.

As Salon’s March 2016 interview with the author discusses, the story of the novel illuminates O’Keeffe’s New York life, her relationship with Stieglitz, their love affair and the resulting power struggle over her brand. A quote from the book:

"For the next few weeks, I paint flowers. On canvas-covered board, I paint petunias—such a simple household flower, arranged as one would expect a still life to be, but cropped, without a vase or background—just blooms. Then I take those same flowers and translate them onto a thirty-six-by-thirty canvases. Massive. Inflated. Their edges soft, like they're just coming into form. ... I'm nearly finished when Stieglitz comes in. He stops when he sees the canvas.

"What exactly do you think you're going to do with that?"

"I don't see where it will take you."

"You mean if it will sell?"

"I want to paint a flower. That is the point. I want to paint it so big that people will have no choice but to stop and look and really see it—as it is. The way I want it to be seen."

The novel raises a key question: Was Georgia O’Keeffe able to paint and have her paintings be interpreted the way she wanted her work to be received?

In Tripp’s author’s note, she alludes to the work and writings of Barbara Buhler Lynes, an O’Keeffe scholar, the editor of O’Keeffe’s Catalogue Raisonee and a founding curator of the Georgia O’Keeffe Museum. Lynes’s book, "O’Keeffe, Stieligtz and the Critics, 1916-1929," opens wide the facts and maps in comprehensive detail how our understanding and assessment of O’Keeffe and her work evolved during those years.

She says many of the critics of that time, commonly male, “assigned O’Keeffe the role of a brainless, malleable, unfulfilled creature that Stieglitz was exploiting in his role as 'showman.' He was defining her as an object, his property, and Luhna asserted that his proprietary claim was compromising the source of O’Keeffe’s creativity (her “unconsciousness”) and, possibly, her potential as an artist.” In O’Keeffe’s own words, “The men all thought they were right about everything”; “all the male artists I knew … made it very plain that as a woman I couldn’t hope to make it—I might as well stop painting.”

In the 1920s, after Stieglitz's first showing of his photographs of O'Keeffe, he exhibited her work at his gallery. Her work was received in light of the photographs he took of her and the "femme fatale" image he created. Lynes says, “Several months after the show O’Keeffe was still fuming about the way her work had been interpreted.” Her artistic talent and paintings were defined as “documents of her sexual feelings,” as women were commonly believed to be inferior in their thinking compared to the more concrete thoughts of men. As Lynes says, "The critics had been unwilling to change their hidebound ways and sought the meaning of O'Keeffe's art in theories, both psychoanalytical and art historical."

In light of their responses, it is remarkable that O’Keeffe did not stop painting. Perhaps she went on to paint the subjects she did want to paint. O’Keeffe objected repeatedly to the notion that her work intended to convey female things only: feelings, emotions and sexually-charged genitalia, as Stieglitz’s camps contended for years. Instead she said, on why she paints what she does, "I want to paint in terms of my own thinking, and feeling the facts and things which men know."

“I have painted what each flower is to me and I have painted it big enough so that others would see what I see.” O’Keeffe stated, “I make them just to express myself—Things I feel and want to say—haven’t words for.”

It is possible that O’Keeffe was not controlled by the critics, but the fact is they affected her and her work. Male critics continued to rally around Stieglitz’s subjugation of O’Keeffe, and, what seems archaic now in Western culture, suggested that “the realization of her creative potential was dependent upon sexual union” with Stieglitz.

Even Achim Borchardt-Hume, the current-day Tate Modern's director of exhibitions, considers O'Keeffe a key figure to open up the debate, noting that women have been overshadowed by men for decades. "There are questions about value and how we define value, when it comes to the contributions of women," Borchardt-Hume said in The Telegraph.

The cultural questions remain: why and how has the imbalance lasted for so long? Why would a great athlete like Serena Williams, for example, need to be qualified with “greatest female athlete,” if, in fact, she is one of the greatest athletes of all time? Does every woman who achieves have to be proceeded with the gender-qualifying tag that they are a female, too? How long will the contributions and artistic expressions of women still and truly be less than those of men?

In this case, we must ask, will O'Keeffe and her art forever be defined by the lines Stieglitz drew to box her in?

If we allow O’Keeffe’s life, choices and work to speak, they have a voice clear enough to make a statement on their own. She began to realize her situation, and eventually left New York City, Stieglitz and his chronic infidelity, and set out on her own. She bought her own house 3000 miles away from him in the desert, learned to drive a car, painted what she found interesting and meant something to her, and then, at the end of his life, she chose to return and see him on her own time. The tug and pull of his empty promises no longer worked their magic. His photographs of her, nude and young and exposed, which built his name and eroded hers, became merely facts. They held no power to silence her any longer because she had survived him. She became bold, authentic, purposeful. She had something to say and forged her brand — she rose to the challenge Stieglitz posed. He did not make her nothing, less than him. Instead, the opposite happened — she became something, her work more iconic than his, despite him. She found her own voice and learned to use it. Yes, she was a woman, but that didn't make her any less an artist than the men.

O’Keeffe perhaps didn't need Stieglitz to achieve her artistic prime. Maybe she would’ve found herself in New Mexico fueled by Nature and its rugged beauty faster without him. Whether or not the world would’ve embraced a woman and her art without his controversial influence is another question. Today, would we say Georgia O’Keeffe is a great woman artist, or a great artist?