Mike Pence is even worse than you think: Trump’s VP pick has a long, disastrous record of opposing LGBT rights 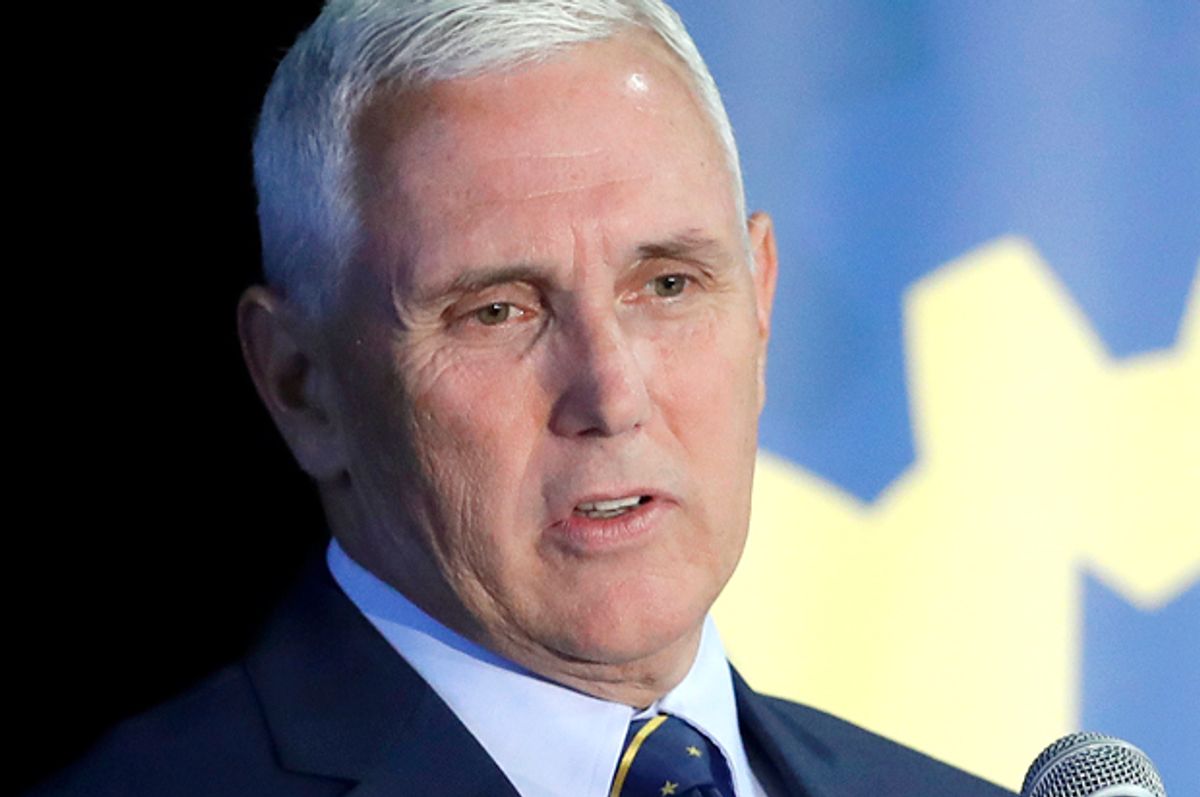 Mike Pence won’t say whether he believes it’s OK to discriminate against LGBT people. The Indiana governor was repeatedly asked about his stance on the issue during a 2015 interview with ABC’s George Stephanopoulos on “This Week.” Stephanopoulos posed the question eight times. Pence wouldn’t say. More recently, he was asked the question during a town hall on February 11. “In a simple yes or no answer, do you believe that gay and transgender people should be able to be fired from their jobs just for that reason?” an audience member inquired.

He offered yet another trademark non-answer. “It’s a great privilege for me to be your governor,” Pence said, adding that he “will not support legislation that diminishes religious freedom.”

But for anyone familiar with Pence’s record on LGBT people, you don’t need to ask: The Tea Party favorite, who Donald Trump announced on Twitter Friday would be his running mate, has one of the most virulently anti-gay records of any government official. Although Pence made headlines last year for passing legislation that would allow businesses to deny services to people based on sexual orientation or gender identity, the Indiana governor has a long history of opposing LGBT equality under the guise of religious freedom and family values.

Mike Pence, who also built his career on restricting abortion rights, is a bad choice for LGBT people — and everyone else.

Pence became a national lightning rod in 2015 for signing into law the Religious Freedom Restoration Act, the first domino in a wave of “religious liberty” bills introduced nationwide. (Mississippi’s House Bill 1523, passed in March, was recently overturned by a federal court.) RFRA was an economic disaster for the state, with 12 conventions pulling out of Indiana in protest of the law. A study from the Center for American Progress estimated that the bill’s passage took a $250 million toll on the state.

The Republican governor signed a “fix” to the bill last year that was intended to keep LGBT people from being discriminated against in localities that have laws preventing it, but ThinkProgress pointed out there’s a loophole even in the compromise. “Though the fix protects against discrimination by most individuals and businesses, it does still permit RFRA to be invoked by churches, nonprofit religious organizations, or clergy who engage in discrimination,” the website reported.

For Pence, his opposition to LGBT equality is not new. He’s stood against the rights of queer and transgender people since first being elected to the U.S. House of Representatives back in 2000. Pence, who also backed the Defense of Marriage Act (DOMA), supported a constitutional amendment in 2004 that would restrict marriage as a union between one woman and one man. He even co-sponsored it. “I believe marriage is the union between a man and a woman and is a unique institution worth defending in our state and nation,” Pence later said on the subject. “For thousands of years, marriage has served as the glue that holds families and societies together."

As the governor of Indiana, he would push HJR-6, a 2013 law that prohibited same-sex marriage in the Hoosier State and blocked unions recognized by other localities from being recognized. Pence, who has earned a zero rating from the Human Rights Campaign, has claimed that marriage equality will bring about “societal collapse.”

In addition, Pence has urged that gays be banned from military service entirely. On his 2000 campaign website, Pence posted a platform referred to as “The Pence Agenda.” It read, “Homosexuality is incompatible with military service because the presence of homosexuals in the ranks weakens unit cohesion.” When asked his opinion of “Don’t Ask, Don’t Tell,” he told CNN that the military should not be “a backdrop for social experimentation,” which he believes would result from gays being allowed to serve openly. (DADT was struck down in 2010.)

His 2000 agenda also opposed “any effort to recognize homosexual’s [sic] as a ‘discreet [sic] and insular minority’ entitled to the protection of anti-discrimination laws similar to those extended to women and ethnic minorities.” He even advocated against HIV funding, urging that money be redirected to discredited anti-gay conversion therapy programs.

In regards to blocking LGBT protections, he has certainly walked the walk. As a congressman, Pence opposed the Employment Non-Discrimination Act (ENDA), which would prohibit workers from being fired on the basis of sexual orientation or gender identity. Even after the passage of same-sex marriage, you can be let go from your job in 28 states simply for being LGBT. Pence said that ENDA “wages war on freedom of religion in the workplace," as The Atlantic reported.

Pence has further opposed allowing transgender students to use the bathroom that corresponds with the gender they identify with and expanding hate crime legislation to include gender identity and sexual orientation. Seven years ago, Pence voted against the Matthew Shepard and James Byrd Hate Crimes Prevention Act.

If Donald Trump is such a “friend to the gays,” as he has attempted to bill himself in recent weeks, why would Trump pick a running mate with such a bad track record on LGBT rights?

That answer is simple. He appeals to the kinds of hardline social conservatives whom Trump’s campaign has struggled to court. Vice presidential picks are notably catered to balance out a candidate’s perceived weaknesses. In the case of Hillary Clinton, she might be keen to select someone who appeals to progressives who supported Sen. Bernie Sanders or the young voters that haven’t rallied around her campaign in the same way they did Obama’s 2008 nomination, like Sen. Elizabeth Warren. (Others now on her rumored short-list include Virginia Senator Tim Kaine, a strong gun control proponent, and Obama Labor Secretary Tom Perez.)

In Trump’s case, his electoral Achilles' heel is evangelicals: A May survey published in Christianity Today found that he has a high unfavorability rating (67 percent) from conservative Christians. A further report from Gallup found that a majority of evangelicals who do support him are doing so as a vote against Clinton, not because they believe he stands for them.

Meanwhile, influential religious conservatives, including Tony Perkins, of the Family Research Council, and James Dobson, of Focus on the Family, have been hesitant to throw their weight behind Trump. “I am very wary of Donald Trump,” Dobson said in a December 2015 email, as the Washington Post reported. “Trump’s tendency to shoot from the hip and attack those with whom he disagrees would be an embarrassment to the nation if he should become our Chief Executive. I don’t really believe Trump is a conservative.”

If Donald Trump wants to secure support among faith-based voters in the heartland, Pence — who became an evangelical cause célèbre after RFRA — might help him get there. But with one of the nation’s most virulently anti-gay politicians potentially a heartbeat away from the presidency, the livelihoods of millions of LGBT Americans stand in the balance.