Military violence and scandal: We need a public discussion of the sexual assault epidemic in our armed forces 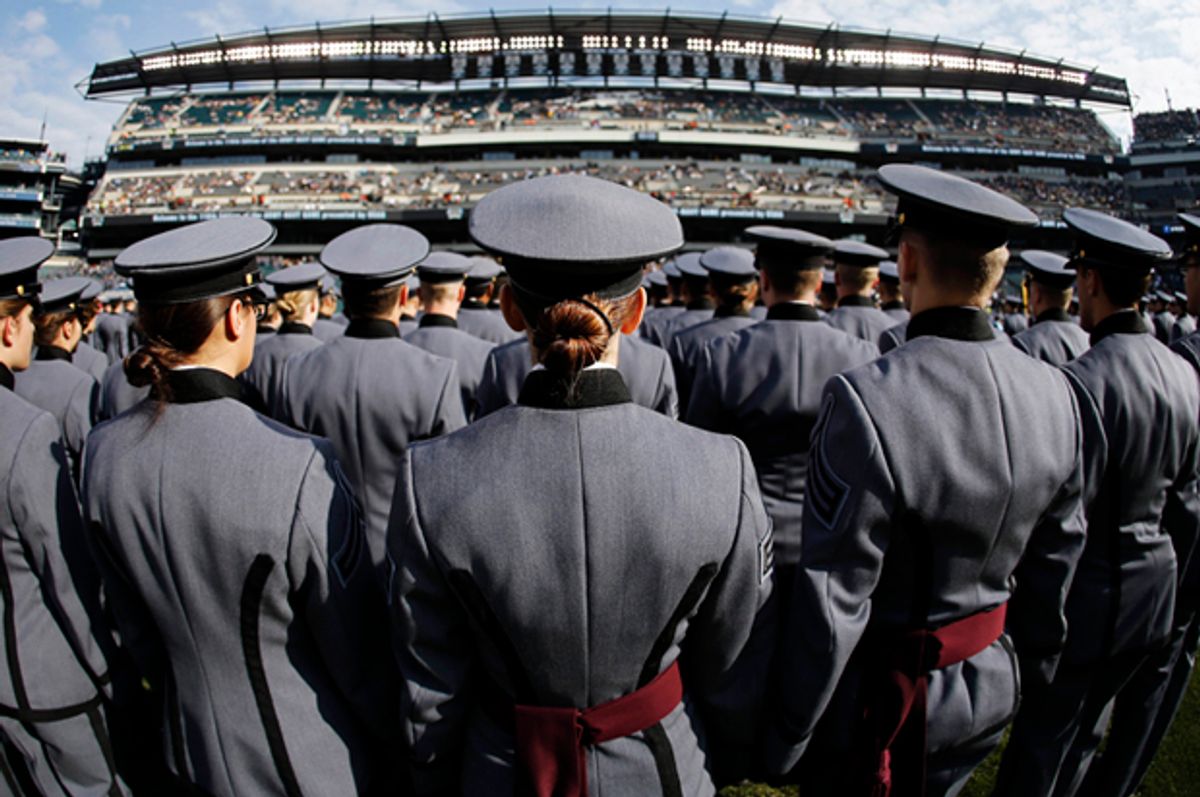 The understandable and natural impulse to honor sacrifice, and award valor, has mutated into a cover story for high levels of violence against innocent people, especially women. It has become nearly impossible to travel anywhere in the United States, or go a few days, without hearing maudlin amplification of tributes to the “heroes” of the American military. Many active duty servicemen and women, and combat veterans, are certainly worthy of praise and gratitude, but the insistence on treating every current and former military member as a secular god, as ritual in the ongoing glorification of the military, allows horrific problems of rape, sexual abuse, and domestic violence to fester and bleed.

The tragic irony is that the victims of America’s societal negligence on military scandals are military members themselves, along with the closely related group who sacrifice in silence – military family members.

It is hardly a surprise that the television media has emphasized Micah Johnson’s connections with black militancy, rather than his status as an Army veteran. Clearly, Johnson was not a good representation of the military, and he was not the typical veteran. There are millions of veterans in the United States, and the problem with assigning the honorific “hero” to each one is that it denies the human and historical reality that any collection of people – large or small – usually contains the ethical and the evil; the kind and the cruel. Johnson, because of his slaughter of innocent people, is among the worst of the worst, but there are elements of his past that, as uncomfortable as it makes people, are not foreign to American military culture.

Those elements deserve scrutiny, rather than shadowing. The need for an honest evaluation of the military’s flaws and failures becomes an imperative for those with a sincere and substantive desire to “support the troops.”

Superiors of Johnson accused the deceased murderer of “egregious sexual harassment,” while he was serving deployment in Afghanistan. They recommended he receive a dishonorable discharge, but for reasons unknown to them, he left the military with an honorable discharge. Sexual harassment, and even assault, is a crime familiar to many women veterans, and the consistent ability of assailants to escape any and all consequences for their sinister acts of sadism, is a continual source of suffering for women who have already endured pain and trauma.

Recent research from the Department of Veterans Affairs indicates that two out of every five military women experience sexual trauma during service. An inquiry into the crisis of sexual assault from former Congresswoman Jane Harman found that in one California veterans hospital, four out of every ten women were raped by fellow soldiers. When sexual violence against men becomes part of the calculus, there are an estimated 38 rapes in the military every single day. Following the physical assault, there is often a bureaucratic rape of emotional and mental health. The RAND Corporation discovered that 62 percent of women who reported their victimization to military superiors experienced professional and social retaliation.

Public discussion of the sexual assault epidemic in the military is rarely audible over the cacophony of phony patriotic imbecility, disguised as indignation. The cheap “How dare you criticize our heroes” sentimentality deflects attention away from the reality that “our heroes” are the ones whose lives undergo destruction at the hands of the minority of sexual predators in the military, and the institutional bias and corruption shielding them from punishment. Genuine patriotism would provide protection for the military members who, in their voluntary duty, experience the worst form of violent and bureaucratic betrayal.

Micah Johnson’s next door neighbor claims that Johnson was “not the same when he came back from Afghanistan,” and according to his mother, he transformed from an “extrovert” into a “hermit.” Several black activist organizations banned Johnson from membership after learning of his sexual harassment, and deemed him “unstable” and “unfit” for participation in their political activity.

Few people have an awareness of how combat changes the personality and character of individuals more than military families. Too often they are not merely observing subtle changes in behavior, but painfully acclimating themselves to a war they never knew they would have to fight. Stacy Bannerman, the leading advocate for military spouses and children who suffer abuse and neglect, calls this thickly curtained theater of war "Homefront 911," in her latest book detailing “how the families of our veterans are wounded by our wars.”

What Bannerman identifies as the “invisible line item” in the bill for America’s post-9/11 wars is the thousands of women and children who become victims when their partners and fathers return from the battlefield, often with Post Traumatic Stress Disorder or Traumatic Brain Injury, and targets for assault and violence. Department of Defense and Veterans Affairs studies both demonstrate that rates of domestic violence are dramatically higher in homes where one parent served in a combat role, and the Military Times recently reported that since 2009, child abuse in Army families has risen by a staggering 40 percent.

A Yale University study in 1994 revealed that combat veterans were responsible for 21 percent of domestic violence cases at the time. Bannerman believes those numbers have held steady, given that VA research indicates that the majority of combat veterans with PTSD commit, at least, one act of interpersonal violence in their first post-deployment year.

Bannerman is the author of the Kristy Huddleston Act. She named it to honor a close friend who was murdered by her husband, an Iraq War veteran, who did multiple tours in an infantry unit. The Kristy Huddleston act would mandate that the Department of Veterans Affairs allocate transition funds to support military families, and veterans’ caregivers, along with medical care and mental health treatment providers, to assist those escaping from a veteran found guilty of spousal violence or child abuse. Bannerman has personally met with 80 members of Congress, and several senators, to argue for the bill. At this point, none of them have agreed to sponsor it.

The consistent and cowardly refusal of the United States government to take aggressive action to protect women in the military, and the women and children of military veterans, exposes the mawkish anthems for “our heroes” as hollow, and convicts the legislative and executive branches of government as guilty of criminal negligence.

The political indictment implicates the American people, because it is largely due to their religious zeal for all things military that the media self-imposes a gag order on military scandal and Congress retreats from its responsibilities to reduce harm and save lives.

The American people chose to react to the simultaneous prosecution of two wars subsequent to the terrorist attacks of September 11, 2001 by tying a yellow ribbon around their eyes, inserting their fingers in their ears, and chanting “hero.” Military members who act with honor and integrity deserve respect and commendation, but those who abuse their power and enlarge the casualty count of war deserve harsh penalty. Ordinary Americans, influential pundits and powerful politicians all claim to revere the troops and their families, but seem satisfied to ignore the injustice inflicted on them every single day.

Micah Johnson is a rare case. The overwhelming majority of combat veterans are not going to massacre innocent people, but irrefutable evidence, along with the heartbroken testimonies of thousands of women and children, demonstrate that too many of them will extend the blast radius of war into the lives of people most worthy of safety.

Every day that America refuses to act and react to the vicious cycle of victimization resulting from its own wars, in the words of Stacy Bannerman, “We lose more lives.”