The "Cooks vs. Cons" dream: How the Food Network got back in touch with its aspirational roots

Fans who cut their teeth on "Barefoot Contessa," not "Grocery Games," were buying the fantasy of cooking like a pro 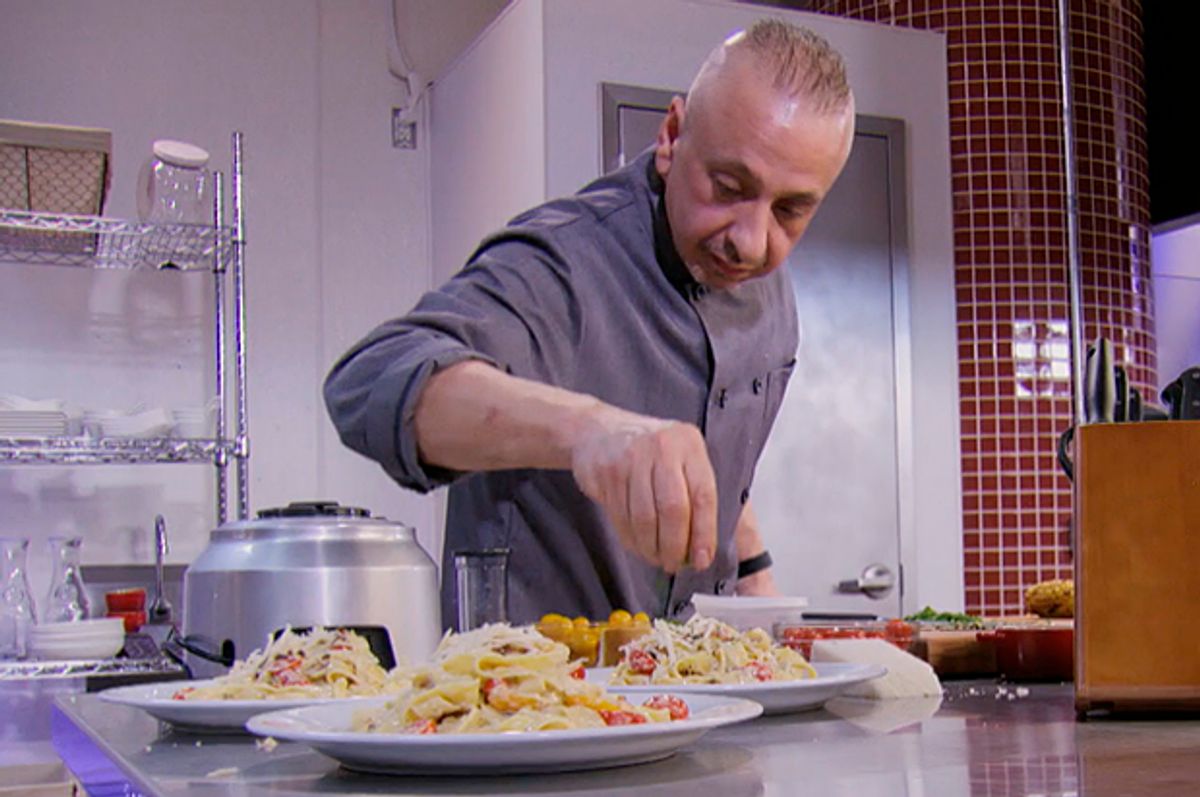 Last Sunday night on the Food Network, a Polish folk dancer served Daphne Oz lasagna -- though at the time, she didn’t know his occupation.

That’s essentially the plot of “Cooks vs. Cons,” a Food Network competition that pits two home cooks against two pros to see whose kitchen skills reign supreme. If you’re thinking “Wow, that sounds an awful lot like ‘Chopped.’” you’d be right, though “Cooks vs. Cons” takes the TV game show antics a step further by concealing the true identities of the competitors from both the judges and the viewers until the end.

The amateurs try to con the judges into thinking they are a real chef, while the pros simply try to prevent the “embarrassment” of being beaten out by a real-estate agent or a high school geography teacher. If at the end, the winner is a con, he is awarded $15,000. If a cook comes out on top, she’d make $10,000.

On the surface, “Cooks vs. Cons” is simply another in a long line of shows featuring chefs sweating over the clock and secret ingredients -- which is a far cry from the network’s initial programming -- but if you dig a little deeper, its premise might actually serve as a reimagination (albeit an unfilling one) of the channel’s original mission for a new generation.

Yes, Food Network was created to educate -- but more than that, it was also meant to inspire confidence in home cooks. By tuning in to watch “Essence of Emeril” or “East Meets West,” viewers felt by the end of the episode they could cook like Lagasse or Ming Tsai. Thirty minutes with Ina Garten, and you too were ready to serve Jeffrey the perfect roast chicken and blow your entire paycheck at the local cheese shop. It was both empowering and aspirational television at its finest.

But over the last few years, the channel has moved from recipes to redemption challenges as cooking game shows take over an increasing number of time slots.

It’s been a gradual rebranding for the network -- but one that has alienated many longtime viewers who can’t tolerate another Friday night with Guy Fieri as their culinary guide. For those viewers, The Cooking Channel now serves as a somewhat of a safe space where the hosts still stand and stir.

There is still afternoon “Food Network in the Kitchen” programming, which is reserved for the remaining shows dedicated to instructional cooking. But the only shows that promos identify, regardless of when you watch, are the “Food Network Nighttime”  competition programs.

Aspirational? Not particularly -- unless you dream of sprinting down supermarket aisles on “Guy’s Grocery Games.”

Yet with the introduction of the show “Cooks vs. Cons,” Food Network has solidified their new brand of aspirational television. Now young home cooks don’t have to merely take tips from the professional chefs; they can ostensibly beat them at their own game. The Network has been building to this for a while now -- like with special episodes of “Chopped Pros vs. Joes” -- but “Cooks vs. Cons” totally teases the concept out.

And so far, it’s been pretty successful. According to Variety, the show “notched double-digit increases in  viewers between 25 and 34” during its six-episode preview run. In a recent Food Network Q&A, Zakarian explained why he thought fans found this show so craveable:

“It’s on everybody’s mind that they all want to be a chef,” Zakarian said.  “So it’s very fun for people to imagine trying to trick someone like myself and two judges into [believing they’re] a chef, so I think it really sets up their interest first.”

In that sense, “Cooks vs. Cons” is aspirational for today’s audiences. Viewers can dream of being the one to fool the judges with their superior cooking skills.

And because of this premise, the show also hearkens back to Food Network’s original goal of making home cooks believe that they can dish it out as well as a professional chef. Though considering the network’s current lineup, they’ll have to find somewhere other than the Food Network to learn how to do so.

For that reason, there’s a Food Network purist inside me that hopes the show’s success will create a demand for for more instructional programming, like in the good old days when Alton Brown taught us things on “Good Eats” instead of running around in a shrunken camp counselor uniform as host of “Camp Cutthroat.” After all, in order to beat the pros, it would make sense to learn from them.

But for now, it seems that “Cooks vs. Cons” is the interpretation of the Food Network mission that viewers want to see -- and as Zakarian says in the show’s promo, “that truth is hard to swallow.”