Waste of a beer: Giving the spent grain from your favorite brews a second life

There are more breweries in the U.S. now than ever. Our grain byproduct problem isn't going to solve itself 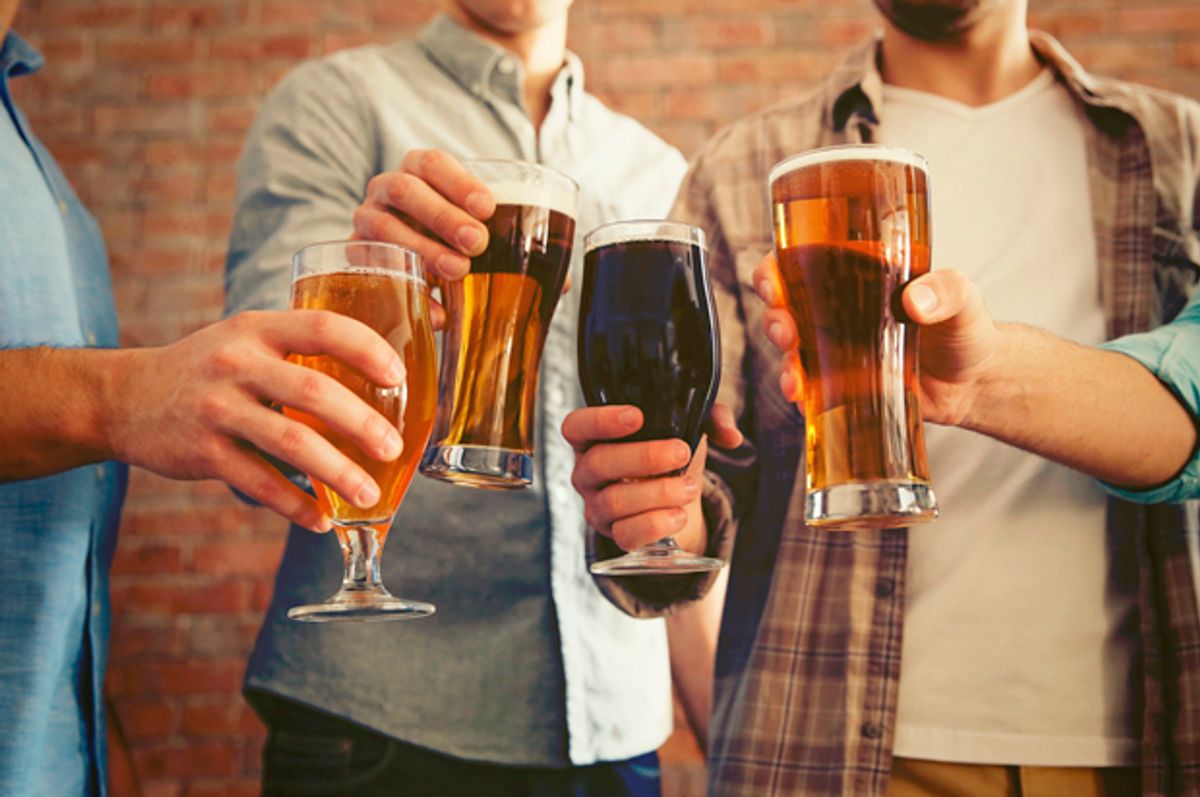 "Eat beer," invites San Francisco's Regrained, the brand that turns spent beer grain into granola bars. And as tasty as this company's treats are, its founders have more in mind than simply filling lunchboxes or fueling hungry hikers: "Roughly 40 percent of the food that we grow is never consumed," says Regrained co-founder Dan Kurzrock. "What we're talking about more broadly is closing a nutrient loop."

Kurzrock's concern has to do with the fact that there are now 4,500 breweries in the U.S. -- more than we've ever had in this country since the previous record of 4,131 was last set in 1873. This is great news for beer drinkers, but could be a problem for the entire world: like all other manufacturing companies, breweries deplete natural resources and generate byproducts that, when left unchecked, can threaten the health of our environment. Up to 85 percent of these brewery byproducts consist of spent grain: the malt and adjuncts left over after sugars and flavor have been extracted from grain by soaking and draining it. But this "waste" still has plenty of nutritional – and financial – value, and brewers and entrepreneurs alike are scrambling to find the most efficient and lucrative ways of converting it from a liability to a cash cow.

New Belgium Brewing, the fourth-largest craft brewery in the country, produces close to a million barrels of beer each year between two facilities. New Belgium's original Fort Collins, Colorado, brewery produced 73 million pounds of spent grain last year, all of which was sold to a local farmer overseeing about 8,000 cattle. "Some studies show that giving spent grain to cows actually has the greatest offset potential for greenhouse gas emissions because you're not requiring that weight in grain to be grown on the field specifically for cattle," explains Katie Wallace, assistant director of sustainability at New Belgium. "Because of the synthetic based fertilizers, and the tilling, and the tractors, it's a carbon intensive process to grow grain." Thus, the exchange lowers the environmental impact of two industries simultaneously.

However, New Belgium faces a bit more difficulty at their second location in Asheville, North Carolina, where giant cattle farms are nowhere to be found. "It's hard to get one farmer to be able to take the load that we're producing," explains Nick Ampe, New Belgium's Environmental Health and Safety Specialist. "We need to be able to spread it out around to a lot of [farmers], so we've partnered with WNC Communities." Farmers can pay a small fee to join this local nonprofit's Brewer’s Grain Alliance, which enables the farmers to purchase wet brewer's grain at a reduced cost. "We could get a higher price for our brewer's grain and send it out of the state, but all of our grain stays within a maximum of a 100 mile radius of Asheville," Ampe says.

Through all of its efforts across both locations, New Belgium is able to divert 99.8 percent of its waste from landfills. Their environmental efforts generally go above and beyond those of most breweries, but as Katie Wallace also points out, "Any brewery will have a high waste diversion ratio because you can get paid… for finding a new home for your spent grain. It's just a smart business decision."

It's not so simple for breweries in urban settings, though: Most farmers aren't willing to pick up grain in emission-spewing trucks from breweries in busy cities with narrow streets, traffic, parking and tolls. In many metropolises, unaccounted-for spent grain must go to a landfill, where organic matter breaks down into methane, the atmospheric impact of which is more than 25 times worse than carbon dioxide. For the minority of cities that do have access to one of fewer than 350 composting operations in the U.S. that process food waste, aerobic decomposition from composting still emits CO2 into the atmosphere. And most breweries can't afford to pay the city to continuously compost thousands of pounds of spent grain, anyway.

Such is the case for Seattle's Fremont Brewing, an urban brewery that goes through up to 14,000 pounds of dry malt each day. Fremont has been lucky enough to find a farmer willing to take the majority of its spent grain for the time being, but a planned expansion could soon generate too much for their partner to handle. Seeking alternative methods of disposal, Fremont obtained a grant from the city for a yearlong trial with an on-site anaerobic digester that harvests methane for energy that could charge a car, for example. "This pilot system… could maybe take a half a percent of our waste, if that," explains Fremont's Quality Manager Robert Fulwiler. "It's really cool as a demonstration, but if we want to use this technology we need to collaborate with the city or other breweries and get something a little more scaled up." Unfortunately, the full-scale version simply isn't yet affordable for a brewery of Fremont's size, and would be too large for a small urban facility anyway.

This, in part, is why Regrained offers urban brewers the opportunity to convert their spent grain into snack bars. After just a few years of working with three San Francisco breweries, they're now selling close to 10,000 bars each month online, as well as in gyms, yoga studios, bike shops and home-brew supply stores. "Food waste is the third biggest greenhouse gas contributor to the planet," says Regrained's Kurzrock. "We don't try to be all doom and gloom about that, we're more focused on the upside: the opportunity to create something delicious that also adds value in these other areas of the ecosystem…. Not doing this would be a missed opportunity."

Spent grain snacks don't stop with human consumers: Companies are now making them for pets, too. Doggie Beer Bones founder David Crane has been collecting spent grain from half of a dozen local breweries in the San Diego area — and turning them into dog treats — since 2009.

About 3,000 of the roughly 3,600 pounds of spent grain he processes each year come from Stone Brewing to make "Stone Bones," but he churns out a total of 15,000 units a year in total. Apparently, they're quite healthy: "It's got a good fiber content, and the peanut butter and eggs provide good protein content," Crane claims. "We have APCO certification for the nutritional analysis on all of our packages… and it's a crunchy treat, which tends to help with teeth."

Other companies have since followed suit. Bare Bites in Frederick, Maryland, for example, was founded on all-natural dog treats made from dehydrated beef liver in 2012 -- but the brand decided to introduce Brew-Yahs, their own spent grain treat, just a year later. The company annually goes through 300 to 400 pounds of spent grain from the first brewpub in Frederick, Monocacy Brewing. Incredibly, this is only .4 percent of the 50 tons of spent grain a small brewery like Monocacy outputs annually; there's clearly plenty of room for Brew-Yahs to grow.

Best of all, none of these three treat companies pay for raw materials – the breweries offer them free spent grain, since they require so little of any brewery's daily output. There simply isn't yet enough of a market for spent grain snacks – whether for dogs or humans – to support the massive daily output of even the smallest of breweries. But Kurzrock sees his business as a model for one on a much larger scale. "Our vision is to have a whole line of products that are made using this stuff, beyond bars. And eventually co-brand with other companies and bring this new ingredient into the mainstream."

But no company currently deals with spent grain more completely, responsibly, and magnificently than Juneau's Alaskan Brewing. When Marcy and Geoff Larson founded the company in 1986, it soon became clear that, without any local composting programs, larger farmers, or inspired snack companies to take their grain, the remotely located brewery would have quite a problem on their hands if they wanted to grow. So after nearly a decade of scraping by, bypassing landfills by spreading their grain throughout Juneau to feed "a chicken here, a cow there," in 1995 the Larsons installed a grain dryer, which would stabilize grain long enough to keep it from souring during shipping to dairy farmers in Washington state.

Then, in 2008, Alaskan installed a mash filter press, which "squeezes all of the great material out of the malt like an espresso machine does with coffee, and leaves instead a very, very dry residue," as Geoff Larson describes it. The equipment replaced their lauter tun — the vessel used to extract clear, liquid wort (pre-fermented beer) from the grain — and saved the brewery 1.5 million gallons of water the first year it was installed.

And finally, in 2013, Alaskan Brewing installed a burn chamber that would ignite the 6 to 8 million pounds of spent grain "sawdust" it produces each year, using it to power a steam boiler that would, in turn, fuel the brewery itself. The 22nd largest American craft brewery calls the 161,000 barrels it brews each year "beer powered beer." They are still fine-tuning the process for efficiency, but "we're getting a lot more value out of our spent grain using it as a fuel source," says Andy Kline, communications manager. "Plus, we're not spending money on the fuel we would otherwise have to use to generate the steam."

So why hasn't every American brewery made this leap -- especially when breweries in population-dense Europe have been using mash filter presses for a century for water efficiency? Beyond the up-front financial burden of such an investment, Kline says that many brewers are quite simply more comfortable using lauter tuns to extract sugar from wort. "It's the way that makes the most sense for someone who has been a homebrewer for a long time. Stepping to a mash filter press is… fairly foreign… and if you're not at a certain scale, it probably doesn't even make that much sense."

Like the Alaskans who settled the land long ago, Alaskan Brewing was founded by pioneers adapting for survival; most other brewers don't necessarily need to pursue more advanced means of dealing with spent grain. But as natural innovators, American brewers are generally open to investing in modern technologies that will help the planet and permit humans to brew beer for decades to come -- the only problem is that they can't do it alone. If brewers are going to continue to adopt new methods of processing beer byproducts, our government needs to support such practices, and we, as consumers need to demand them.