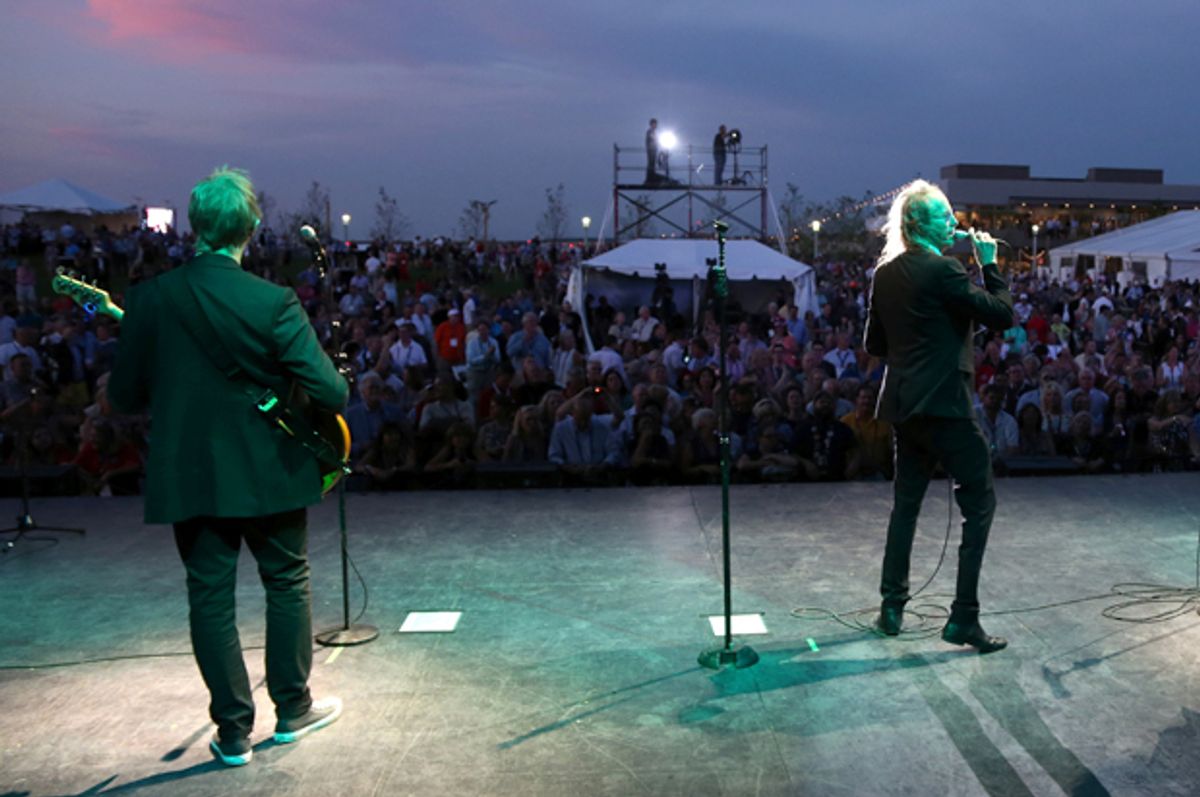 Three Dog Night at a Rock the Night kick off party on the sidelines of the Republican National Convention in Cleveland, July 17, 2016. (Reuters/Aaron Josefczyk)
--

CLEVELAND — Three Dog Night, or whatever surviving members of that mid-‘70s chart-topping band make up the current iteration, wished joy to the fishes in the deep blue sea. Republicans danced and drank. A nearly full moon hung in the sky over the Lake Erie waterfront, a picture-perfect example of the cheerful, bland “downtown entertainment district” now found in almost every American city. After the concert ended, we watched a spectacular fireworks show, better than the one I saw over the Hudson River on the Fourth of July.

It was almost endearing, almost reassuring. Attendees at the Republican National Convention host committee’s big welcome party on Sunday night did not arrive bearing shotguns, or wearing XXL white T-shirts hand-inscribed with puzzling messages about Muslims or the government or abortion. (OK, I did see one guy like that.) It was the same assemblage of sand-blasted Americans in ill-fitting golf attire and faintly sinister young men in Brooks Brothers suits that you could find at thousands of fine-dining establishments and country clubs and alumni mixers clear across the middle of the middle of our great land. Conceivably not your cuppa Joe, or mine, but just about as baby-back-ribs wholesome as something can be.

If you’re thinking that by “Americans” I mean exclusively white Americans, by the way, you're almost right but not quite. There was a measurable smattering of people of color in the crowd, perhaps 1 or 2 percent, most of whom looked to be Asian-American. I counted seven or eight black people among the thousands who came streaming past me, and that’s not including the two local African-American ladies selling Trump shirts and hats from a sidewalk booth on East Ninth Street. “Welcome to Cleveland, baby! Make America great again!” one called out as we walked past.

As my colleague Amanda Marcotte observed, the whole experience was disturbingly normal. It lies within the realm of possibility that this week’s Trumpapalooza in Cleveland will turn out to be a lot more normal than anyone expects, or at least that it will fall within established American norms of jingoism, hateful rhetoric and public conflict. On the other hand, maybe not. It’s too early to make informed comments about the extent and intensity of security measures here, but my first impression amounts to this: Holy Mother of God! A few hundred yards from our thoroughly pleasant lakefront gathering, police on Sunday put the finishing touches on a systematic series of fences unlike anything I’ve ever seen in the United States.

An enormous black perimeter fence, made of what looks and feels like hardened steel and standing roughly eight feet tall, now encircles the “Q” (as Clevelanders universally call the Quicken Loans Arena) and a large western chunk of downtown, between the campus of Cleveland State University and the natural boundary of the Cuyahoga River. I’m not talking about the usual steel-aluminum portable barriers used by urban police departments to corral protests, but a fixed and bolted fence installed by construction crews, at a cost that must have run well into the millions. It’s an exaggeration to compare the Black Fence of Cleveland it to the Berlin Wall or the border fence between Israel and the Palestinian territories (or to a certain wall along the Mexican border proposed by a certain candidate), but not by all that much. It’s more like a 21st-century cognate of the “peace walls” that still separate Protestant and Catholic communities in Belfast.

As my colleagues and I discovered late on Sunday night, normal east-west pedestrian traffic through downtown Cleveland has been virtually shut down, which will make it extremely difficult for protesters of any variety to spread out through the city in unpredictable ways. Everyone walking to the convention zone from the hotels and restaurants to the east is channeled along Lakeside Avenue or Euclid Avenue and Superior Avenue, the central downtown arteries. Leaving or entering the convention zone on foot, by way of the city’s middle-class residential neighborhoods to the south, is essentially impossible for anyone without the relevant credentials.

Given all the news events of the past few weeks, and the long and anxious buildup for this convention — will we see Black Lives Matter protests? White nationalist protests? Will everyone arrive strapped, given that Ohio is an open-carry state? — I guess none of that is especially surprising. We encountered nothing that resembled open anger or street conflict on Sunday evening: A dozen or so Code Pink protesters exchanging cheerful banter with Republican delegates on their way to the party; a man wearing a Hillary mask parked in the crowded pedestrian arcade on East 4th Street, holding a hand-lettered sign reading “Trump vs Tramp.” But the intense official clampdown has undeniably created its own atmosphere, which could be described as enforced calm, or perhaps the calm before the storm.

We encountered a phalanx of about three dozen bicycle cops rolling through the streets around the frozen zone twice before I realized they weren’t locals. Their badges clearly identified them as officers of the Fort Worth Police Department, which suggests that they traveled 1,200 miles to help out on the shores of Lake Erie, for reasons unknown. Have they been deputized or sworn in? What authority can they possibly have in Cleveland? If they arrest someone, or use lethal force, what are the consequences? Does anybody care and will anyone even notice?

As my colleagues and I were rushing to make a bus after the Three Dog Night concert (which we failed to catch), a youngish blond fellow in a Brooks Brothers suit, who was pleasantly inebriated but not sinister at all, struggled to keep up with us. We looked interesting to him, or something. “This is the lane for everybody who’s hurrying,” he called out, in a faintly accusatory tone. I explained that we were late for a bus and that it would be hard to walk home from here (not yet knowing how hard). “There are literally hundreds of buses,” he said, sounding wounded. “Come have a drink with me!”

I felt a little bad about that guy later, when we wound up beached at a gas station on the edge of downtown, convincing a Lyft driver to work his way past the concrete street barriers and come rescue us. In a better world, we would have had a late-night beer with the drunken young Republican, and shared a moment of communion or at least companionship. Maybe it would have made this world infinitesimally better had we done so. But we had big black fences in front of us, and too many questions hanging in the air.