White fragility is real: 4 questions white people should ask themselves during discussions about race

Are you a "fragile" white person? Here's how to tell—and what to do about it 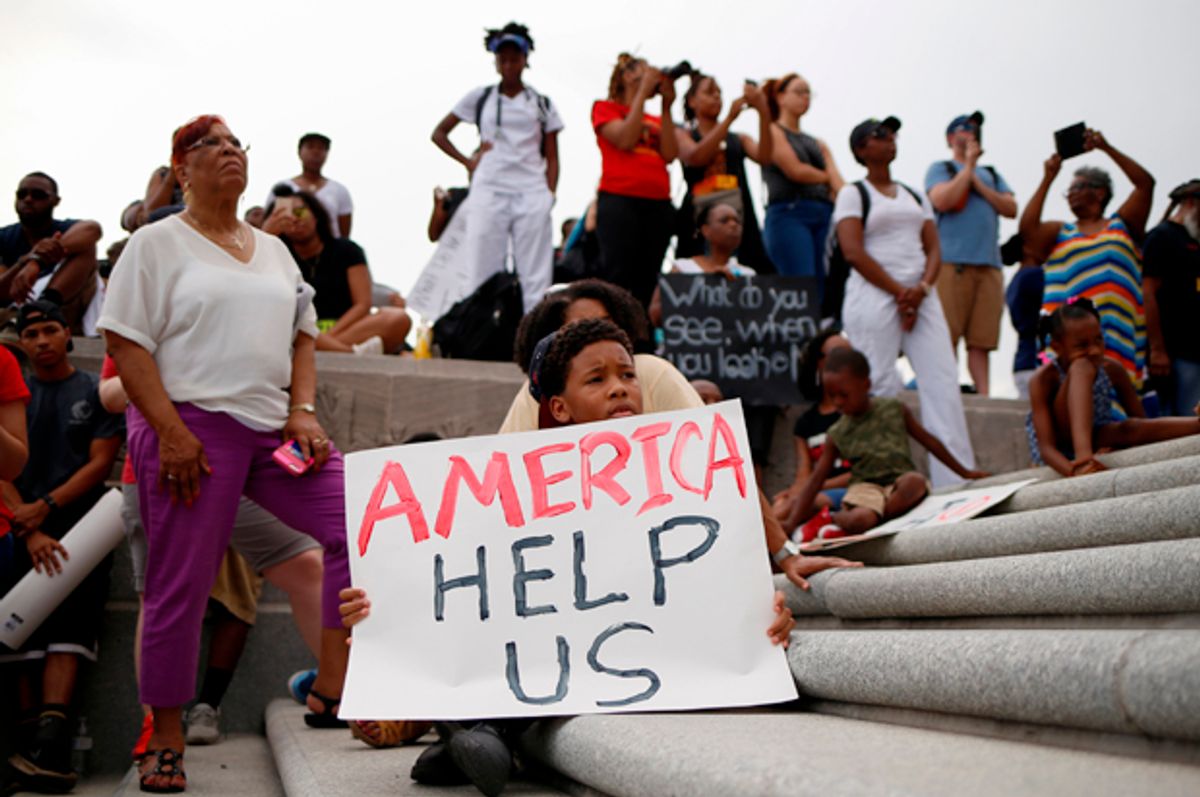 Since the shooting deaths of Alton Sterling and Philando Castile at the hands of law enforcement officers earlier this month, millions have taken to the streets as well as social media to express their outrage. Tags like #BlackLivesMatter and #EndWhiteSilence have been trending consistently on Twitter and Facebook, and CBS News footage of Alton Sterling's death on YouTube has garnered over 1.7 million views.

Earlier today, a fourth Baltimore police officer indicted in the 2015 death and arrest of Freddie Gray, an event that sparked a series of protests known as the Baltimore Uprising, was acquitted of all charges, including manslaughter and reckless endangerment. The conversation — and the outrage — is now louder than ever.

On Facebook, I'm fortunate to be friends with scores of people, white and black, who are outraged at these deaths and others like them, and who are willing to shout down overt racism when they see it. But when difficult conversations about race arise, there also emerges a coping mechanism that all white people are privy to, one that is equally damaging as blatant racism and one that not all of us realize we're employing: white fragility.

White fragility is a phrase coined by author Dr. Robin DiAngelo, and is defined as “a state in which even a minimum amount of racial stress becomes intolerable, triggering a range of defensive moves.” According to DiAngelo, most white people “live in a social environment that insulates them from race-based stress,” due to their privilege as part of the cultural majority. In turn, says DiAngelo, whites are infrequently challenged and have less of a tolerance to race-based stress, causing them to be hostile, guilty, defensive, or fearful when confronted. This phenomenon is white fragility. In the end, white fragility ensures that conversations about race are derailed, and the status quo of white supremacy is upheld.

I consider myself an ally, but I frequently need to check myself against white fragility, in order to make sure I help center the conversation where it's appropriate – black deaths at the hands of law enforcement – and not on feelings of white guilt, anger or denial (mine or anyone else's).

Here are a few ways I check myself against white fragility.

1. Am I trying to change the subject?

Raise your hand if you've heard (or said) the following:

“Why are we talking about this when we've got ___ to worry about?!”

In other words, this translates to: I'm uncomfortable. Can we talk about something else? And it harkens back perfectly to what DiAngelo says about racial comfort: “In the dominant position, whites are almost always racially comfortable and thus have developed unchallenged expectations to remain so. When racial discomfort arises, whites typically ... blame the person or event that triggered the discomfort (usually a person of color). … White insistence on racial comfort ensures that racism will not be faced.”

White people don't like to be uncomfortable or challenged – I'll certainly own that.

To enact change on a large scale, however, white people need to have painful, uncomfortable conversations about white privilege, white supremacy, and about how we benefit from it. Otherwise, nothing can change.

2. Am I using inappropriate humor to deflect?

One major way I've noticed white people derail conversations about race is to inappropriately inject a little “humor.” During one online conversation, when things started getting heated, a white person who hadn't been part of the conversation prior to that moment parachuted in on the comment thread and posted a picture of two Labrador Retrievers with the caption, “Black Labs Matter! All Labs Matter!” Okay, then. In another online discussion, an acquaintance tried to diffuse the tension by posting YouTube compilations of puppies in the comments section. (By the way, fellow white people, what is it with us and dogs?) In both instances, the conversations ground to a halt and the women of color in the conversation were understandably pissed. Sometimes humor can be healing – but sometimes it can minimize another person's pain.

3. Am I getting defensive or angry?

As a white woman, I know I'm absolutely cocooned in privilege: The color of my skin gives me an advantage when I'm applying for a loan, interviewing for a job, or even being taken seriously when I speak. But sometimes hearing from other people about how privileged I am can send a jolt of hot anger through my body. I forget that having white privilege doesn't mean my life has been perfect, or that I've never had a single hardship, or that I've never suffered loss. I have.

Anger is something I see (and personally experience) often when I'm confronted with racial issues, because accusations sting. I know theoretically that white people have oppressed and colonized indigenous people and people of color, and the effects of that are still felt to this day, from the Rwandan Genocide to Apartheid to the subliminal fear of black men that killed Philando Castile. But hearing that I'm personally part of the problem? That hurts. DiAngelo explains this perfectly in her paper on white fragility when she states, “people of color are almost always seen as 'having a race' and described in racial terms ('the black man') but whites rarely are ('the man'), allowing whites to see themselves as objective and non-racialized. … Race and racism become their problems, not ours.”

I may be outraged by the deaths of Sterling and Castile. I may have never participated in slavery or personally colonized a country, but you can bet that I still benefit and enjoy privileges that my friends of color don't. I'm still part of the problem. By recognizing that, I hope to be part of the solution.

If you have white friends or are yourself a Fragile White Person, I can almost guarantee you've said or heard the phrase “negativity” in reference to the uproar around Sterling and Castillo's deaths – be it the news itself or the way people are responding to it. One popular Christian blogger I follow (a white woman) wrote a brief blog post after the Dallas shootings, begging her readers to “choose love and forgiveness” instead of “dwelling on the negativity.” It sounds noble, but asking others to “choose love and forgiveness,” especially so soon after suffering a tragedy, is just one way of many to minimize black pain.

Consider this: If you think it's inappropriate to go to a funeral and tell the bereaved to “cheer up” and “focus on something positive,” then it makes no sense to call for “forgiveness” or flood your twitter with “positivity” immediately after a shooting. Right now, people need to grieve and feel some feelings. Let them.

In the wake of Sterling and Castillo's shooting deaths, my white friends and I feel hopeless, angry, desperate to help in some way. I certainly don't know how to repair systematic white supremacy, but what I do know is this: When white people get defensive, conversations grind to a halt. Understanding stops. Feelings are repressed. Tension builds. Nothing is resolved.

Want to help? Don't want to be a Fragile White Person? Get uncomfortable, and get used to it.