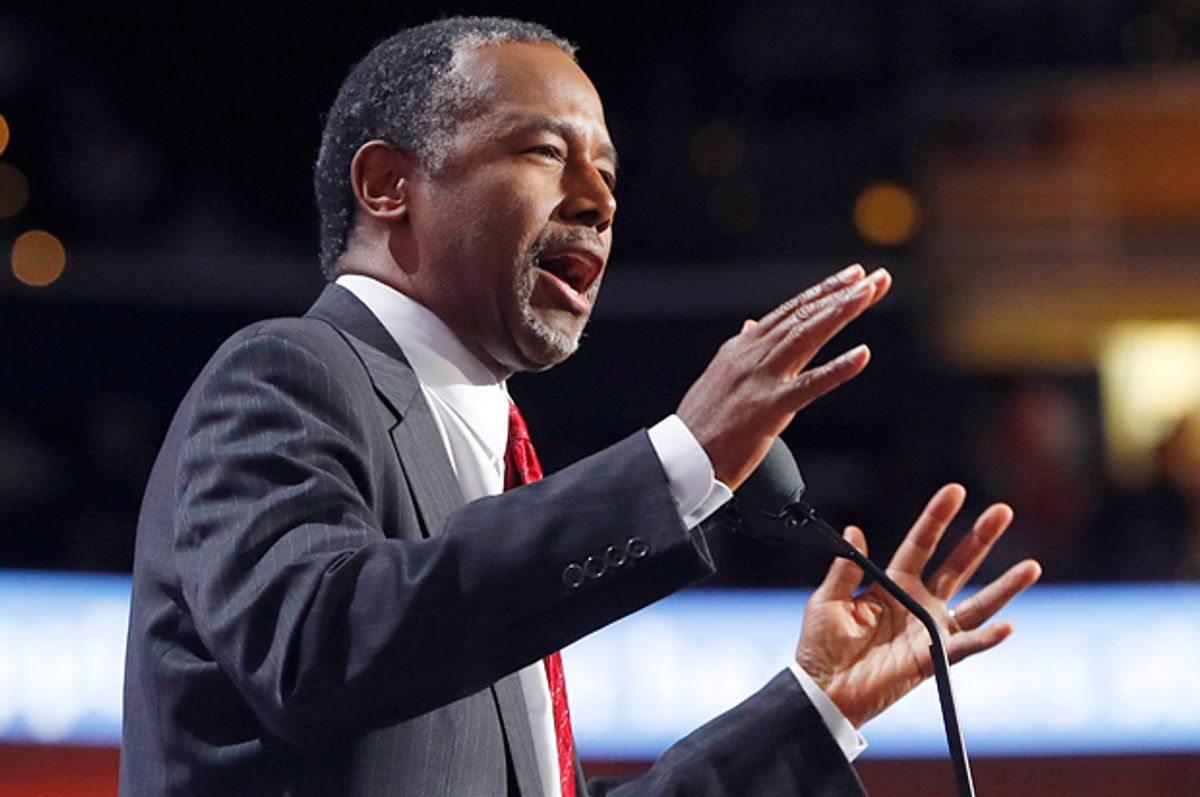 At a Wednesday Republican National Convention "Big Tent Brunch" for the conservative group American Unity Fund, conservative reality star Caitlyn Jenner affirmed that "I feel like our best hope to get back to a constitutional government... is a Republican Party." But she also conceded to the crowd, "It was easy to come out as trans. It was hard to come out as Republican." I'm sure it was — what with belonging to a party that at the same place and same is busy publicly questioning her very existence.

Just one day before, Tuesday morning, Dr. Ben Carson spoke to the Florida delegation, stating his thoughts on "this whole transgender thing," and saying, "For thousands of years, mankind has known what a man is and what a woman is. And now, all of a sudden we don’t know anymore. Now, is that the height of absurdity? Because today you feel like a woman, even though everything about you genetically says that you’re a man or vice versa? Wouldn’t that be the same as if you woke up tomorrow morning after seeing a movie about Afghanistan or reading some books and said, “You know what? I’m Afghanistan [sic]."

At least Carson's consistent — last fall  he expressed his distaste for transgender bathroom rights, saying, "It is not fair for them to make everybody else uncomfortable. It's one of the things that I don’t particularly like about the movement." And in a January interview, he declared "how silly this is. I mean, its beyond ridiculous that you take the most abnormal situation and then you make everyone else conform to it….And when we start trying to impose the extra rights based on a few people who perhaps are abnormal, where does that lead?"

Carson's far from the only high ranking Republican National Convention speaker who doesn't understand how gender works. (tl;dr: It's not just your genitals!) In May, Trump's running mate Indiana governor Mike Pence spoke out against Obama administration guidelines for public schools to permit students to use the bathroom facilities appropriate to their identities, saying, "the federal government has no business getting involved in issues of this nature." And last year, signed into law a "religious freedom" measure that would have permitted businesses to turn away people for their sexual or gender orientation.(It was soon amended to affirm the state "does not and will not be able to discriminate against anyone, anywhere at any time.")

Last year, New Jersey governor Chris Christie vetoed a bill that would have allowed transgender residents to change their birth certificates, saying it would open up "legal uncertainties," and a few months later, he mentioned transgender rights in the same breath as terrorism, and stated that where he's from, "Men go to men's rooms, women go to women's rooms and there really shouldn't be a whole lot of confusion about that -- public accommodations. And I don't think we should be making life more confusing for our children."

Ted Cruz similarly believes that "As the father of daughters, Im not terribly excited about men being able to go alone into a bathroom with my daughters." And when the military opened the door for trans service people, Mike Huckabee fumed that "Just to say I feel differently, that's absurd that we would just let people identify. If they want to do a gender reassignment surgically, that's not a taxpayer responsibility. We don't do breast enhancements…. We don't do it for a female who says, 'I'd feel better about myself as a 38D rather than a 34A."

There are plenty of truly horrifying portions of the Republican Party's current plank with particular with regard to its across the board views about the LGBT community. But the sheer brazen ignorance that guys like Carson — an actual doctor! — are peddling as the world watches is terrifying. It tells trans people that they aren't real. That they're just playing dress-up. That they don't have a right to go bathrooms where they feel safe. And that hateful rhetoric is damaging to individuals and to, frankly, everybody who wants to live in a world where we're all treated with respect and dignity and freedom from fear. No wonder Caitlyn Jenner had a hard time admitting this is the party she still supports. And how anybody who cares about the rights of trans people could is just, in the words of Ben Carson, absurd.