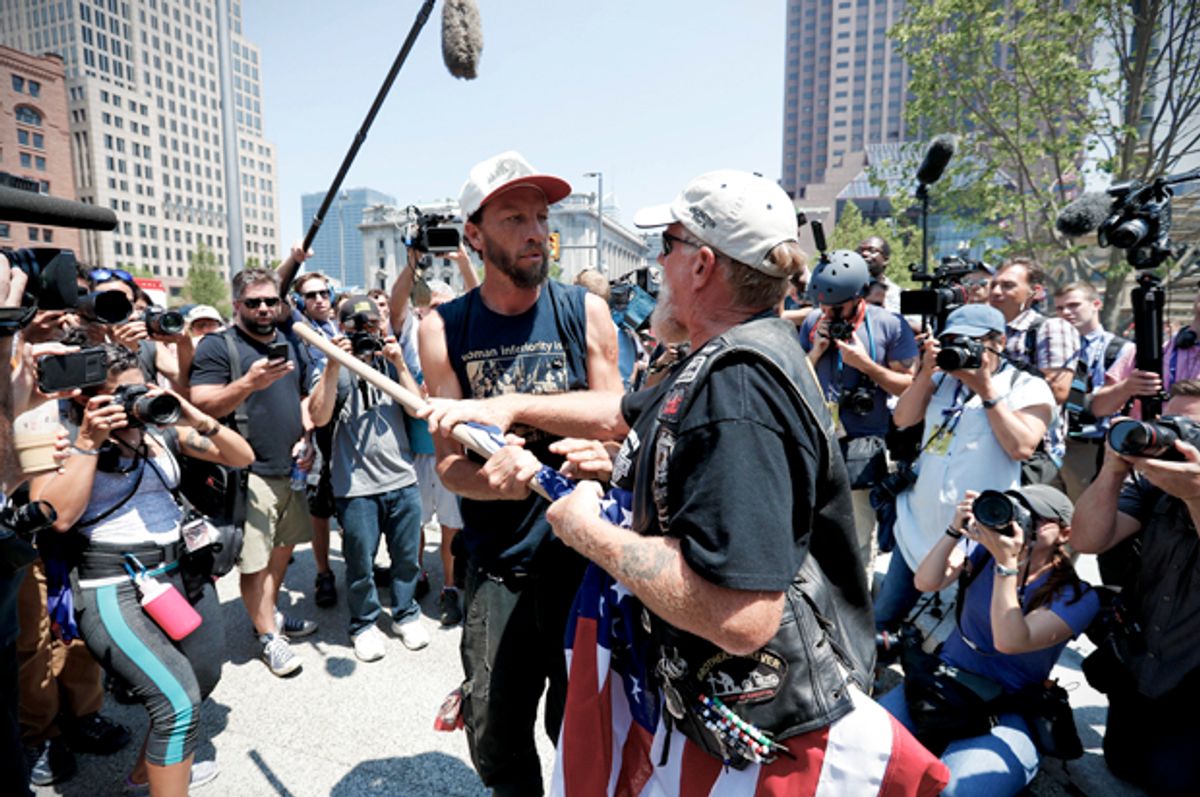 Protesters clash over the American flag, July 19, 2016, in Cleveland, during the Republican convention. (AP/Alex Brandon)
--

CLEVELAND — Many people, not least the thousands of people who do some version of what I do, came here expecting trouble. In some cases, they were clearly relishing that possibility: Nothing makes a better story, or better images, than conflict. There isn’t a political reporter or commentator alive who hasn’t marveled at the footage of pitched battles between police and protesters in Chicago’s Lincoln Park in 1968. A decent proportion of today’s press corps was on hand in 2004 for a tense week of police sweeps and street confrontations in New York, outside the Republican convention that renominated George W. Bush.

That level of drama has been totally absent from Cleveland this week, which may speak to the fact that this year’s Republican National Convention is unlike any such event in political history. Instead of angry showdowns between Black Lives Matter protesters and armed white nationalists, or mass demonstrations by undocumented immigrants, what we’ve seen so far has been more like protest theater, small groups of people staging pseudo-spectacles designed to feed the media’s insatiable hunger for conflict. Whether you want to see that as a microcosm of what happened in American politics this year — and a reflection of how we wound up with a supposedly major political party nominating some bozo from reality TV — is up to you.

There has long been a self-consicous theatrical streak within political protest, going back at least as far as the 1960s radical chant “The whole world is watching” and the nonviolent civil disobedience of the Civil Rights Movement. Gaining the media’s attention is a central strategic element of any activist movement. But at least to this point, the RNC of 2016 feels like an absurd inversion of that principle, with the sensation-addicted media seeking to turn every minuscule incident into massive social discord.

It’s honestly depressing to witness in person, probably because you can’t do so without becoming implicated in the underlying problem. On Tuesday afternoon in Public Square, downtown Cleveland’s central plaza and designated “protest zone,” I watched seven or eight men wearing military-style fatigues and carrying assault weapons stomp around in a purposeless formation, followed by several dozen journalists and vastly outnumbered by a surrounding phalanx of cops. If you’ve been following the news from the Buckeye State, you probably know that Gov. John Kasich declined to suspend Ohio’s open-carry law this week, which has rendered the protest zone into an impromptu open-air gun show.

This particular squad of heavily armed white dudes in wraparound shades called themselves the West Ohio Militia and were eager to speak to all comers, although what they had to say never deviated from depressingly familiar far-right talking points. Do you really think President Obama wants to take away your guns? “Yes, sir. Obama should stand trial for treason.” Do you really think Donald Trump is on your side? “Yes, ma’am. Mr. Trump is a defender of Second Amendment freedom.” They said they weren’t racists and were on hand with their AK-47 to defend innocent lives in case trouble broke out. “Look around you at these police officers,” one told me with a grin. “They’re not carrying weapons like these.” Well, that’s reassuring.

Those guys were lured into taking photos with a fit and tanned woman of 30 or so, who gave off a disturbing vibe halfway between No. 1 real-estate salesperson and unmedicated psychotic. She was carrying a Confederate flag purse embossed with rhinestone six-shooters, and wearing a T-shirt depicting Barack Obama in minstrel-style blackface, under the word “TYRANT.” As far as I could tell she was just an enthusiastic civilian; she carried no sign and wore no convention badge. Someone asked her how African-Americans (a majority population in the city of Cleveland) reacted to her getup. “They tell me they appreciate seeing the racism out there on the surface!” she said brightly. “I say, ‘Thanks!’” Several black people were standing there looking at her in silence.

Perhaps 50 yards away, a small band of left-wing counterprotesters milled around, occasionally bursting into chants about pigs and fascism. Some of them clearly belonged to the Revolutionary Communist Party, a cultish Marxist-Leninist group with roots in the late ‘60s. (To this day, for reasons unclear, the RCP attracts significant membership from the African-American community.) They stayed clear of an even smaller group calling themselves the International Workers of the World, who evidently claim some distant ancestral relationship to the old-time labor union of that name.

Adjacent to those groups was another armed man all by himself, a white Muslim convert carrying an assault rifle and two handguns. He had a line of European radio journalists waiting to interview him. He told a woman from Radio Catalunya, in Barcelona, that he had just bought the side arms, at $650 apiece, to match his pants. Yes, it was provocative for him to stand outside the RNC with a bunch of guns, he told a guy from RTE, the Irish national broadcaster. “But it’s a provocation in response to the racism and bigotry and hatred being spouted by Donald Trump.”

See, I don’t buy it for a second. If there were 50 armed Muslim immigrants in Public Square, that would count as a provocation in response to a provocation, not to mention an event that would spark widespread panic and a dramatic official overreaction. (I’m not advocating such an action, but if it happened that would be legitimate headline news.) A handful of socially awkward white men standing around in “Call of Duty” fantasy gear, regardless of their ideology or religion, is at best a pseudo-provocation or a pseudo-event. The atmosphere on this sweltering summer afternoon reeked of desperation rather than tension: A few dozen people from the social and political margins desperate for legitimacy encountered a mob of journalists desperate to find a level of drama that might justify their parasitical existence. OK, if you insist: Our parasitical existence.

In fairness, Mr. White Muslim wasn’t the only left-winger with a gun. I saw another white guy later, carrying an assault rifle and wearing a T-shirt that suggested he might be a Rastafarian, or at least into weed and reggae. A cameraman followed him into Chipotle on Euclid Avenue, and stood there shooting close-ups of his weapon while the guy ordered a chicken burrito with guacamole. Ahead of him (and me) in line were two activists from ANSWER, a protest coalition closely tied to the Workers World Party, bitter rivals of the RCP. They had downloaded apps on their phones for free orders of guacamole and chips, which slowed things down considerably.

At some point a shoving match broke out in the middle of the Public Square protest zone, reportedly between Alex Jones, the conspiracy-theory maven and far-right radio host, and a group of left-wing protesters who had surrounded him chanting, “Off our streets, Nazi scum!” This brief scrum occurred no more than 30 feet from where I was standing, and was immediately surrounded by a thick cocoon of journalists with cameras and iPhones, many times larger than the nugget of actual antagonists. A huge blue wedge of cops from various jurisdictions, engaged in their own brand of theater, pried the parties apart and hurried Jones away to a waiting vehicle. I got shoved into a cameraman from InfoWars, Jones’ site, who was telling someone on the phone, “I think I got that. It looked awesome.”

It was blatantly obvious — so obvious I hardly need to point it out — that the only reason the scuffle occurred was to manufacture news out of non-news, and that it wouldn’t have happened at all if so many of us weren’t standing by ready to report it as an actual and potentially ominous event. This account in The Hill, for instance, completely fails to “observe the observable,” to borrow Joan Didion’s phrase: No mention is made of the fact that the protesters in Public Square were outnumbered at least three to one by cops and journalists. Since what had happened barely merited mentioning and no one was injured or arrested, the author is forced to conclude with empty wishcasting: “As protests outside the Republican National Convention in Cleveland continue, many fear that the opposing groups are bound to clash with each other.”

Who are the “many” who fear what the press corps openly yearns for? Most of the people in Public Square, myself included, were simply milling about in sun-blasted curiosity, wondering whether something interesting might happen. There were people with Trump buttons and people with Bernie Sanders T-shirts and people with the names of black men killed by police and people sporting “Hillary for Prison” logos. There was the guy selling Donald Trump whoopee cushions, though I didn’t see anybody buy one. The elderly man urging people to repent and accept Jesus visibly wilted in the heat and sat down. The elderly woman giving a speech about the Cleveland Police Department’s misdeeds in a thin, reedy and barely audible voice, even though no one was listening.

There are certainly activists in Cleveland pursuing targeted objectives: Code Pink protesters have interrupted the proceedings inside Quicken Loans Arena several times, and my colleague Amanda Marcotte reported Tuesday on the pro-choice “counselors” staging interventions with delegates. Of course I don’t know what will happen during the last two days of the convention, and large-scale protest is still possible. An anti-Trump march along the city’s “permitted protest route” is scheduled for Thursday afternoon, feeding into an evening rally in Public Square around the time Trump accepts his party’s nomination. At this point, the organizing group’s Facebook page has 24 comments. Eighty-six people have signed up to attend, and 127 more say they are “interested.”