Stephen Colbert was self-conscious about bringing back "Stephen Colbert": 4 things we learned about the "Late Show" host from THR's new profile

Colbert is comfortable joking in Latin, but he also wants viewers to know he enjoys a Bud Light Lime 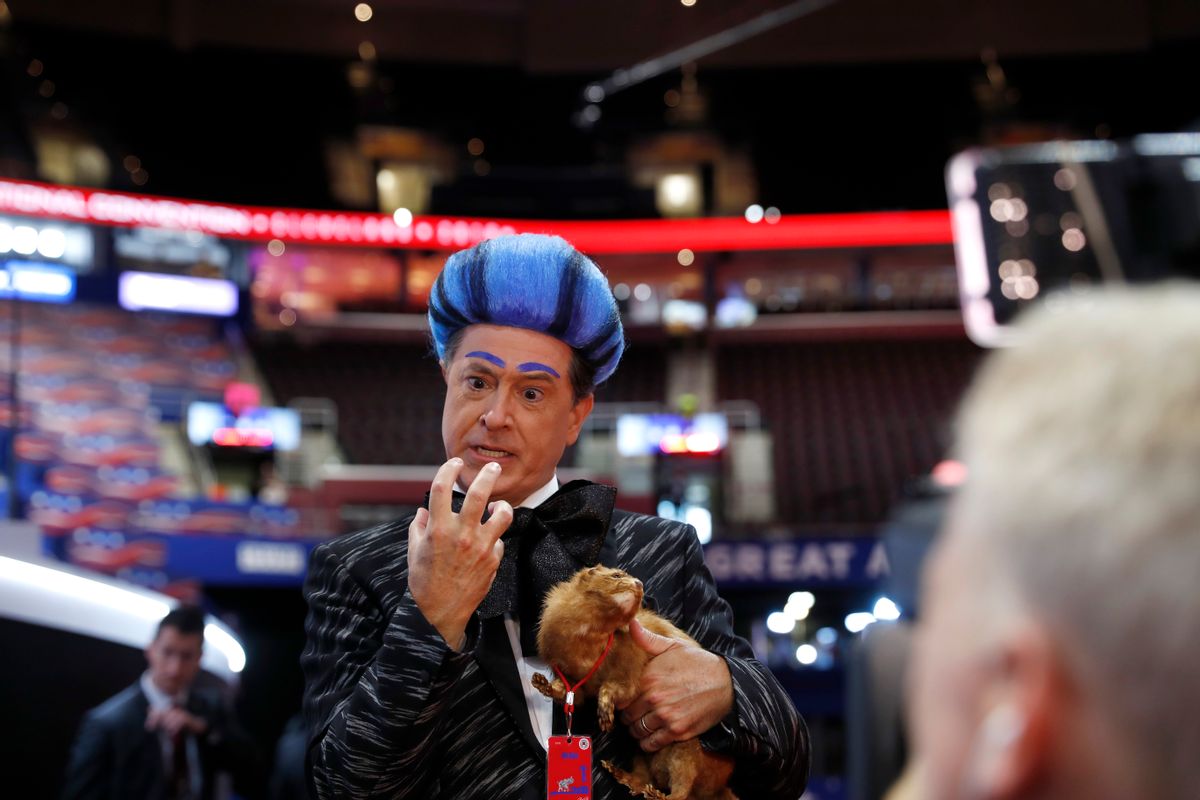 Talk show host Stephen Colbert performs on the floor of the Republican National Convention at Quicken Loans Arena during a taping of his program, Sunday, July 17, 2016, in Cleveland. (AP Photo/Carolyn Kaster) (AP)
--

Stephen Colbert is hoping that this week's Republican National Convention will mark a turning point in his tenure as the host of CBS's "Late Show." Colbert lags behind "The Tonight Show Starring Jimmy Fallon" in the ratings, and the former "Colbert Report" host has struggled to find his stride with viewers since dropping his old show's cable-news-spoof conceit. For Colbert, the RNC marks an opportunity to once again exercise his hallmark political humor while also firmly establishing himself as a distinct late night voice.

Colbert spoke about the challenges of getting into character and being himself in a revealing new profile in The Hollywood Reporter. Here's what we learned:

Dr. Stephen T. Colbert, the right-wing blowhard host of "The Colbert Report," was the persona that made Colbert a household name, but the signature character was notably absent for the first eleven months of  Colbert's "Late Show" tenure. Dr. Colbert made his triumphant return to television Monday after the first night of the Republican National Convention, riding into the studio on a chariot dragged by shirtless Uncle Sams.

Before hopping back into character, the real Colbert told THR he was worried his new audience wouldn't go along with the gag: "Hopefully, they won't be like, 'Huh? That's a different show. Wasn't that 18 months ago? Why haven't you moved on?' "

2. CBS wants Colbert to get back to doing what he does best

It's no coincidence that Colbert brought back his popular character just in time for the satire-friendly RNC. "The Late Show" trails NBC's Jimmy Fallon in the late-night ratings battle, and CBS executives want Colbert to remind viewers of the sharp political humor that was his bread-and-butter at Comedy Central.

Critically-panned interviews with Donald Trump and Hillary Clinton reinforced the perception that Colbert had abandoned his piercing style with his move to CBS. Colbert says this was partly out of necessity — he felt he needed to comfort potential guests from the political world, going so far as to write personal letters of reassurance to Ted Cruz and Bernie Sanders. "I think after the legend of that whole character, people wanted to know [that] I'm really going to treat them with respect," he told THR.

"Late Late Show" host James Corden, whose viral "Carpool Karaoke" videos have become an internet sensation, is perceived by some observers to be breathing down Colbert's neck at CBS, fueling rumors that the network plans to flip-flop its late night hosts. Colbert admits to THR that he hears the chatter about Corden, with whom he has a "very nice relationship," but tries not to let the talk bother him:

When I ask Colbert if the Corden rumors make him feel bad, he looks down at his desk. After a long pause, he answers: "The implication of that question is that the show isn't good enough in its present position. So of course that makes you feel bad. But it doesn't jibe with what I know about our show, so you recover."

CBS Entertainment president Glenn Geller told THR that Colbert's "Late Show" performance has been"uneven" (which can't be a comforting thing to hear from one's boss), but he denied rumors that the network is considering making a change in the time slot.

4. The cultured Colbert is learning to embrace the lowbrow

The Northwestern-educated Colbert is comfortable joking in Latin and dropping e.e. cummings references into casual conversation, and the early part of his "Late Show" tenure were marked by consistently sophisticated guests, like writers Ron Suskind and George Saunders. But since showrunner Chris Licht joined the staff, Colbert's guests have hewed closer to the traditional late-night formula of actors and celebrities.

"I still want to talk to scientists and intellectuals, authors and members of the news media," Colbert says. "But it’s only a couple times a week now as opposed to what the bulk of it was before, but I don’t miss that.”

Erudite image aside, Colbert wants viewers to know that he's not some lofty academic: "I eat McDonald’s, I drink Coca-Cola, I like a Bud Light Lime. I do. I mean, in some ways I’m extremely pedestrian."