Black Trump supporters attack: The strange tale of the whitest candidate ever and his African-American boosters

From Pastor Darrell Scott to the performance-art duo Diamond and Silk, Trump’s black backers go on the offensive 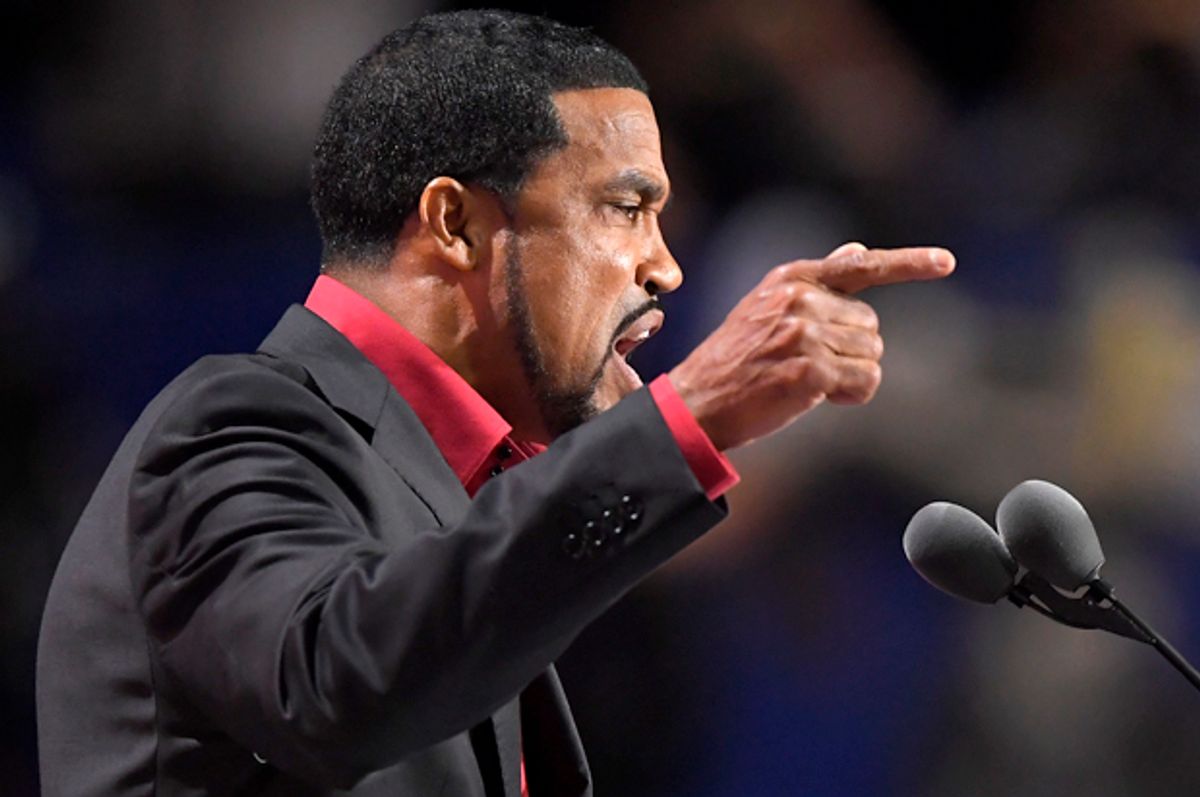 CLEVELAND — Given the extreme whiteness of this year’s Republican National Convention, where some estimates suggest that only 3 to 4 percent of the delegates are people of color, one of the week’s stranger subplots has been the media offensive staged by Donald Trump’s tiny coterie of African-American supporters. Whether the true goal of this offensive is increasing Trump’s minuscule share of the black vote or reassuring Trump’s overwhelmingly white base that they’re not racists is open to debate.

Trump’s poll numbers with black voters throughout this campaign have been abysmal even by Republican standards: One recent survey here in Ohio, a crucial swing state, showed him winning zero percent of African-Americans. I guess that’s a statistical zero rather than an actual zero, since Trump has at least one big-name black booster in Ohio and if you watched the convention on Wednesday night, you might have caught his act. Pastor Darrell Scott, an elegant and eloquent preacher who heads a huge congregation in suburban Cleveland Heights, delivered an impassioned Trump defense, bringing down the house with his extensive quotation from the Declaration of Independence. (It might, when you think about it, be a little complicated for a black man to quote Thomas Jefferson. But that’s too large a topic for today.)

I ran into Scott earlier in the week, without knowing who he was, during his heated encounter with TV host Roland Martin, who anchors the black-oriented Web broadcast NewsOne Now. You can watch the edited interview segment on the NewsOne site, but what you can’t see is the extraordinary atmosphere around the interview location, which was surrounded by other journalists with cameras and cell phones. It felt as if every black person on Media Row, the warren of talk-radio cubicles in a parking garage opposite Quicken Loans Arena, had gathered around to watch, regardless of ideology or affiliation. For a white viewer — or at least for me — it was a little uncomfortable to watch Martin and Scott arguing about which of them had called the other an “Uncle Tom,” or whether blacks were being racist by believing Trump was a racist. It took me a while to figure out why.

Martin was pretty much just trying to stir the pot and draw eyeballs, like every other broadcaster at the RNC. I imagine his viewers are fascinated, in a train-wreck sort of way, by why a prominent and successful black preacher in suburban Cleveland would cast his lot with the most overtly racist and divisive presidential candidate since George Wallace. Even though Martin’s show is mostly watched by blacks, I couldn’t shake the feeling that Scott’s spiel — and his role in the Trump campaign — was primarily targeted at people who looked more like me.

It didn’t help matters that Scott appeared on Martin’s program right after a pair of women who call themselves Diamond and Silk, or the “Trump Stump Girls.” If Scott represents the sober, serious aspect of African-American Trumpmania, Diamond and Silk (whose actual names are Lynnette Hardaway and Rochelle Richardson, respectively) are closer in spirit to the candidate himself, meaning that they seem more like a WWE tag-team act than political activists. I started to say that I don’t know why the hell they’re doing this, except that when you see them in action the question answers itself. As an entrepreneurial career move, it’s brilliant — sassy, street-wise black ladies for Trump! — and as performers they are ludicrous and irresistible. One of them said of Hillary Clinton, “She put a little hot sauce on some chicken, and you think we’re supposed to vote for her!” I’m too white to know what that means, but it’s hilarious.

You can watch that segment too, but honestly it doesn’t begin to capture the deranged carnival atmosphere in the room. The stuff Diamond and Silk said to Martin on the air — “You don’t want to come off that Democratic plantation, baby! You scared you’re gonna miss a bag of beans or a slab of fatback!” — was positively tepid compared to the things they kept on yelling after the cameras were turned off. Words were said that a white journalist would be unwise to repeat. Finally Martin’s producer began to plead with the crowd of surrounding gawkers and reporters: “Please put down your phones and walk away. They’re never going to leave unless you do that.” It got so loud that an RNC security guard, also African-American, came and hovered nearby until Martin assured him that no actual violence was imminent.

That was more black people, by far, than I encountered in any RNC space the rest of the week, which was especially noticeable in a majority-minority city where the street vendors selling “Make America Great Again” and “Hillary for Prison” T-shirts are almost entirely African-American. You don’t have to vote for Trump to hawk his swag, obviously, and I don’t think Trump’s electoral strategy, to the extent he has one, relies on peeling away any significant percentage of the black vote. Every machination of the Trump campaign, including the deployment of his black surrogates, is about assuring disgruntled whites in swing states like this one that it’s OK to vote for him and they’re not playing the historical role of ordinary Germans circa 1933.

That was blatantly obvious in the case of other black RNC speakers like Colorado U.S. Senate candidate Darryl Glenn and Milwaukee County sheriff David A. Clarke Jr. Both of them openly derided the Black Lives Matter movement, swore that only Trump would make America safe from radicals and terrorists at home and abroad, and went right to the edge of the old-time Republican position that whatever problems exist in the African-American community are caused by African-American immorality. Hardly any black people can possibly have enjoyed those speeches, but they weren’t meant to. Trump himself is too shrewd, most of the time, to say things himself that sound like overt race-baiting. He needs people “with a nice tan,” as Glenn put it, to say those things for him.