In 2004, Mike Pence tried to help George W. Bush by declaring "weapons of mass destruction have been found in Iraq" 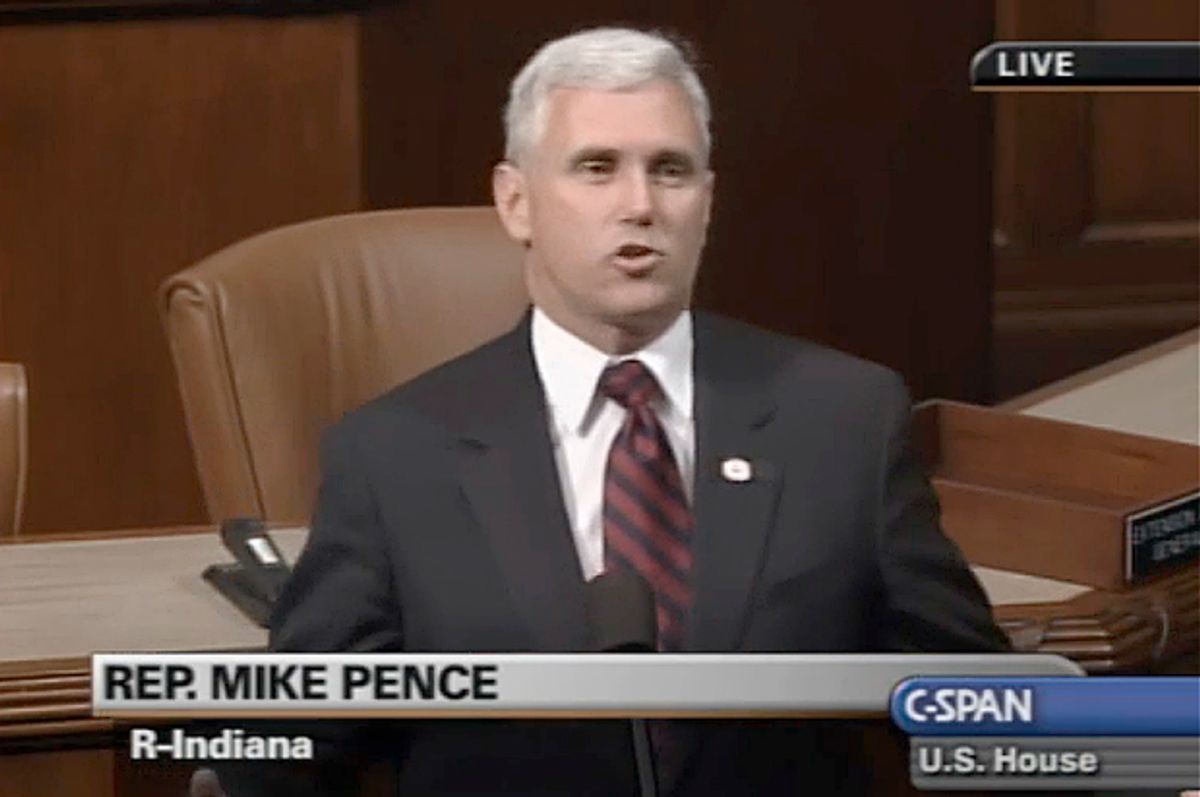 Back in May 2004, the Iraq war wasn’t going particularly well. It had been over a year since George W. Bush had triumphantly landed on an aircraft carrier to declare semi-victory in the war he had initiated against Saddam Hussein’s regime, and the situation in Iraq had been steadily unraveling ever since. Insurgent attacks were on the rise, American human rights abuses had been uncovered at Abu Ghraib, and the weapons of mass destruction the Bush administration had warned were present in Iraq had not been discovered. The CIA’s former chief weapons inspector had said in January that, in all likelihood, those weapons did not exist.

With the security situation in Iraq deteriorating and the rationale for the conflict crumbling, President Bush and his Republican backers in Congress found themselves in a politically dangerous situation. They needed some good news, something to lift their spirits and prove the war critics wrong. One man stepped up: then-Indiana representative, and current Republican vice presidential nominee, Mike Pence.

On May 19, 2004, Pence gave a short speech on the floor of the House of Representatives pushing back against the idea that America under George W. Bush was substantially worse than it had been four years earlier. As evidence of how things had improved, Pence argued that in the year 2000, Saddam Hussein had “amassed weapons of mass destruction,” but four years later Hussein had been captured and “we have found pieces of his WMDs.”

It wasn’t entirely clear what Pence meant by “pieces of his WMDs,” but he helpfully elaborated on this claim the following day. On May 20, 2004, Pence once again took to the floor of the House and said “I am here to report… weapons of mass destruction have been found in Iraq.”

As Pence made clear in his remarks, he was referring to the discovery of two (2) munitions by U.S. soldiers that were found to contain sarin and mustard gas. In Pence’s estimation, those two weapons validated the administration’s arguments for war. “‘Where are the WMDs?’ We've been asked that again and again,” Pence said. “They are where they've always been: hidden in Iraq, within the reach of terrorists, a threat to the Iraqi people, U.S. soldiers and the world.”

Here’s what actually happened. Pence, in claiming that WMDs had been found, was way out ahead of the Bush administration itself, which was unwilling to wave around the discovery of these munitions as validation of its rationale for war. The reason the administration held back was simple: they weren’t the weapons Bush and his top officials had warned about. They were old munitions from the weapons program Saddam Hussein had discontinued in 1991. The Bush administration’s argument for the war was that the Iraqi dictator had restarted chemical weapons production and stockpiled new WMDs.

Indeed, contemporaneous news reports show Bush administration officials urging caution in drawing any conclusions from the discovery the munitions. Here’s what the Associated Press reported on May 18, 2004:

But officials stopped short of claiming the munition was definite evidence of a large weapons stockpile in prewar Iraq or evidence of recent production by Saddam's regime - the Bush administration's chief stated reason for invasion.

Some U.S. officials and weapons experts suggested the artillery shell may be an experimental design that predates the 1991 Gulf War.

A defense official, speaking on the condition of anonymity, said the origin and age of the artillery shell are under investigation, but said shells of this type have a long shelf life, so it could have been constructed some time ago.

Sure enough, it was later determined that the sarin shell was an experimental remnant from the Hussein regime’s old chemical weapons program. A few months after the discovery of those shells, the Iraq Survey Group released its final report which found that “while a small number of old, abandoned chemical munitions have been discovered, ISG judges that Iraq unilaterally destroyed its undeclared chemical weapons stockpile in 1991. There are no credible indications that Baghdad resumed production of chemical munitions thereafter.”

But Pence just blew right past all the warnings and grandiloquently declared that these old, degraded munitions were evidence of the chemical weapons stockpile Saddam Hussein had allegedly “amassed” in the years leading up to the war. It was a politically motivated lie that not even the Bush White House was willing to go along with.