Ted Cruz's ambitious gamble: The Texas senator has made a lot of Republican voters angry

There was no way Ted Cruz could get behind Donald Trump, but antagonizing Trump voters is extremely risky 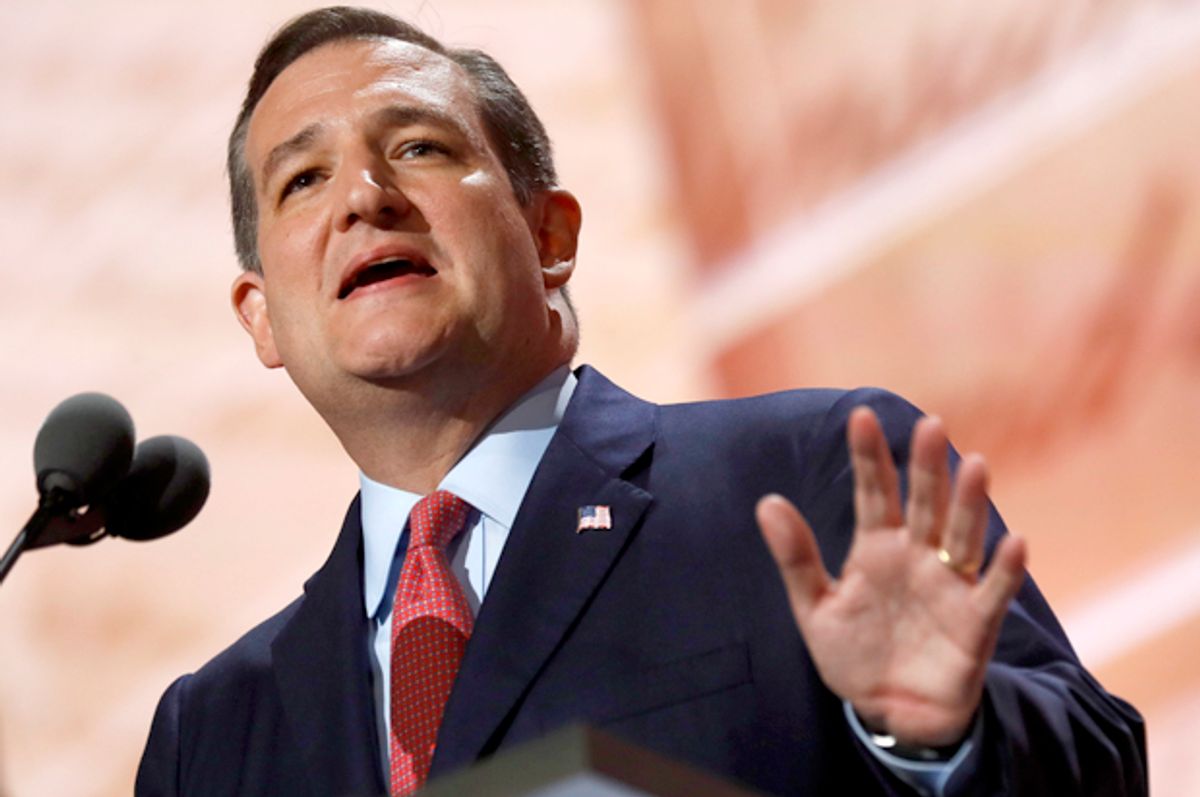 The big news coming out of the penultimate evening of the Republican National Convention is Sen. Ted Cruz’s pointed non-endorsement of his party’s nominee for the presidency. Cruz’s exhortation for Republicans to “vote their conscience” in November echoed the rhetoric of the hapless would-be saboteurs who unsuccessfully attempted to rejigger the convention rules to deny Donald Trump the nomination, and the loud chorus of boos that greeted Cruz as he smirked his way through his remarks was unlike anything I’d ever seen at a major party’s nominating convention.

That Cruz did not endorse Trump is no great surprise – there was no way he could maintain his image as the insurgent leader of the hard-right faction in American politics if he lined up with the party establishment behind Trumpism. But there’s a difference between simply keeping one’s mouth shut and what Cruz did Wednesday night, which was the rhetorical equivalent of relieving himself in Trump’s punch bowl.

As has been pointed out pretty much everywhere, Cruz’s speech was almost entirely about his own political ambition and the 2020 presidential race. And there seems to be an emerging consensus that Cruz did himself a lot of favors by aligning himself against Trump at the precise moment that the rest of his party was reluctantly getting behind him. “If his bet is that Trump is going to lose big and becomes an embarrassing memory for the GOP, that’s what he’s betting he’ll be remembered for,” writes my colleague Heather Digby Parton. Brian Beutler called Cruz’s speech a brilliant gamble that could pay off handsomely if Trump suffers a historically bad defeat.

I’m not so convinced. Cruz’s short career in public office has been built on provocative moments like Wednesday night’s speech, but Cruz’s targets have almost always been either the Obama administration or Republican leaders in Congress. With his convention speech, though, Cruz actively antagonized a large segment of the Republican electorate, deliberately harshing the emotional high they were riding from Trump’s newly affirmed nomination. This was different from the nasty back-and-forth between Cruz and Trump during the late stages of the primary; the contest was over, the decision made, and Cruz revived all that animosity after months of palliative silence while taking little care to disguise his own ambition. Remember how much grief Chris Christie took for his relentlessly self-focused speech at the 2012 convention? People don’t forget stuff like that.

And let’s remember that it was Cruz who once viewed these same pro-Trump Republicans as a natural constituency for his own presidential campaign. Cruz spent the entire second half of 2015 obsequiously hyping Trump’s candidacy because he assumed it would collapse and all those Trump supporters would migrate to Team Cruz. That collapse never came about, but Cruz’s assumption was correct – he was the second choice of a strong plurality of Trump supporters. Trump, meanwhile, had unexpected success winning voter groups that Cruz had assumed would be his base of support: evangelicals, southerners, and hardline conservatives. Put simply, Cruz’s and Trump’s constituencies have a good amount of overlap, and Cruz just pissed off a whole lot of those voters. That’s an extremely risky strategy for a politician who has effectively alienated his own party’s establishment and relies almost exclusively on grassroots support.

There are only so many enemies you can afford to make in politics. It seems possible that a massive Trump defeat could snap Republican voters out of their Trump-fueled reverie and make them realize that charisma vacuum Ted Cruz was right all along. It also seems possible that voters could blame a Trump defeat (and the ensuing Clinton presidency) on people like Cruz who provocatively encouraged Republicans to vote for someone other than Trump.