In the RNC's clash of supervillains, Ted Cruz stands on principle (really!) and reveals the GOP's Trump hypocrisy 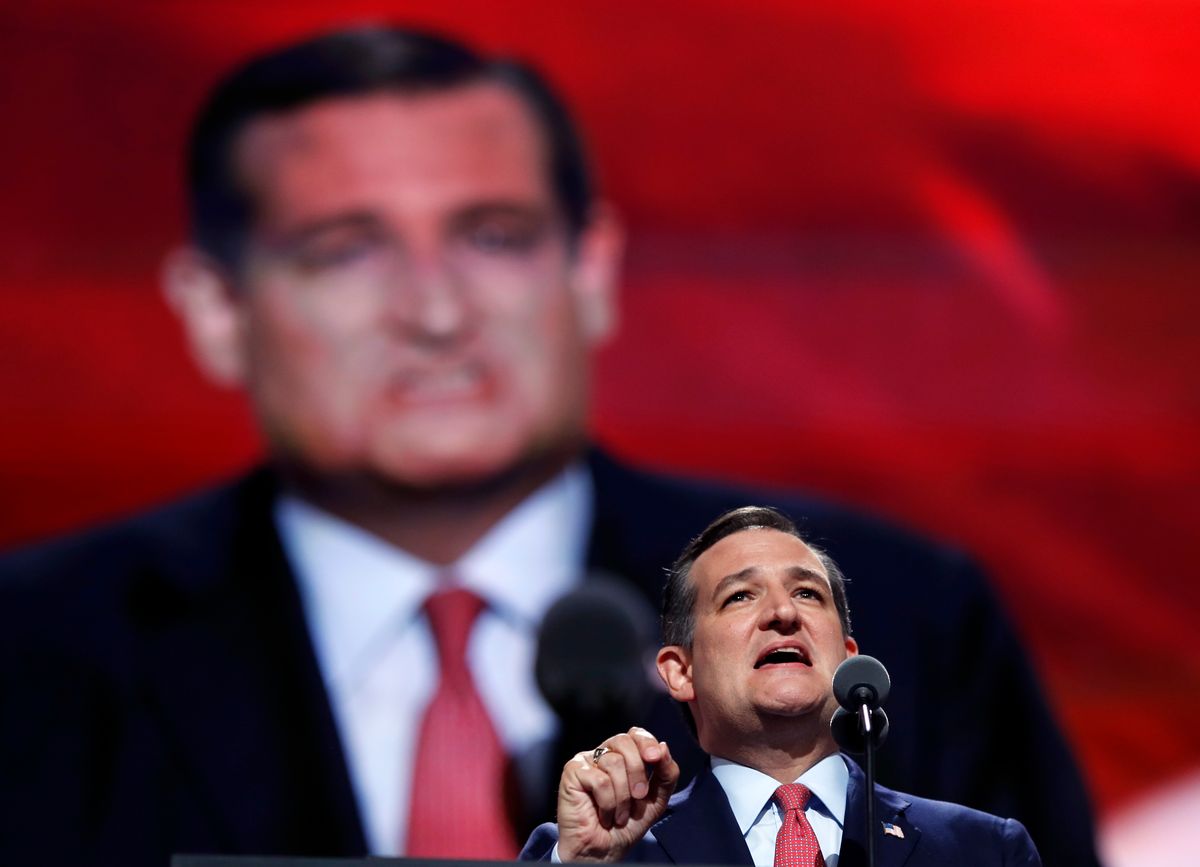 CLEVELAND — Ted Cruz is often described as the most widely hated person in the recent history of the United States Senate, and I guess that on-the-job training prepared him for what happened here on Wednesday night. To the extent that the Republican Party still has a soul, which is debatable, Cruz set out to save it in Quicken Loans Arena with an unexpected and electrifying act of defiance.

Inside the arena, it took a minute or so to realize what was going on. I was sending tweets on my phone, like most of the people in the upper press gallery, and only halfway listening to Cruz’s speech, which seemed to be winding down. Then came his reference to the New York delegation, entirely cryptic to those of us who didn’t yet know that Donald Trump had entered the building. A ripple of energy, almost a physical phenomenon, began to move through the delegates on the floor, and the scattered boos audible almost since Cruz had begun speaking started to build in intensity. The pro-Trump chanting flowed and then ebbed and came back stronger than ever. No one in the arena actually heard Cruz tell people to vote their conscience, or anything else he said in the last 30 seconds. Long before he was booed off the stage, the crowd had drowned him out. Cruz himself, as I imagine was clear on TV, looked well satisfied.

You can spin this remarkable Cleveland confrontation in various ways; my significant other told me later that it played on TV like a collision between the massive egos of rival Marvel supervillains. We can start with the fact that it was an entirely untypical moment of high drama, amid what is supposed to be a stage-managed production celebrating party unity. James Fallows of the Atlantic tweeted that it was the most dramatic convention event since Barack Obama introduced himself to America at the 2004, or perhaps since Ted Kennedy’s unforgettable peroration in 1980, his one and only chance to pick up his brothers’ fallen torches.

Kennedy’s case provides a vague parallel, in that he was a defeated candidate less than eager to embrace his rival. But Kennedy did not call out his own party, explicitly or otherwise, for being craven and hypocritical and having made a grievous historical error. That’s what Cruz did by refusing to endorse Trump in an atmosphere where that’s viewed as an unforgivable sin, and you don’t have to like the guy to perceive that issues of core principle were involved.

Maybe it’s true that Cruz hopes to position himself as the leading candidate and party redeemer in 2020, assuming the Trump takeover goes south. (As pretty nearly all Trump’s business deals do.) But if so he’d almost certainly have been better off staying away altogether, as John Kasich and Jeb Bush and scads of other so-called mainstream Republicans did. Marco Rubio tried to have it both ways by literally phoning it in, which only underscores what a hopeless little dweeb he is. It’s at least as likely that Cruz just shot himself in the head and can never run for anything else ever, and here’s where we have to give the guy credit: I’m convinced he genuinely doesn’t give a crap.

It’s not easy to express admiration for someone you find so reprehensible and obnoxious on so many levels. I experienced Cruz up close and personal in a New Hampshire elementary-school auditorium a few months ago. Even setting aside his hard-right Tea Party ideology, which was no surprise, I found him a uniquely off-putting human being, visibly uncomfortable with the rituals of retail politics and emanating a smug sense of his intellectual superiority to lesser mortals. He’s the man for whom the term “mansplaining” was invented, and I laughed along with everyone else when John Boehner, a congenial old-school dealmaker, described him as “Lucifer in the flesh.”

But Lucifer, as the Princeton-educated Cruz surely knows (and Boehner probably doesn’t), is the fallen angel who refuses to kneel before the power of the Almighty in Milton’s “Paradise Lost,” vowing instead “study of revenge, immortal hate,/ And courage never to submit or yield.” Cruz is a big-time Christian who would no doubt be profoundly uncomfortable with this analogy, but there is something in his Cleveland Great Refusal that evokes the doom, pathos, vanity and nobility that Milton sees in the defeated Satan.

Cruz has been accused of many things, but no one has ever accused him of lacking the courage of his convictions. To me, and very likely to you, those convictions suggest a desire to roll back the federal government and the judicial interpretation of the Constitution by roughly a century, and are nearly as delusional as the fantasies of the Trump movement (in an entirely different way). But I feel confident that Cruz could convince us over a pitcher of beer (in between doing “Princess Bride” voices) that his ideological vision for America is consistent and coherent, even if there’s no way to get there from here without Albus Dumbledore powers and a time machine.

I remember Cruz telling his New Hampshire audience that he would rather lose elections on his platform of dragging America back to purified conservative principles than make compromises in order to win. It was convincing then and it’s more convincing now. Cruz has two things going for him — or three, if you count the fact that he’s so weird and distasteful that he was never going to be elected president, and that he just sealed the deal by getting booed off the stage of his own party’s convention. Virtually alone among major Republicans, he bears no responsibility for the massive con game the party has been running on its own voters for 30 years or so. And he was the only Republican with the courage or the arrogance to stand up in Cleveland and make clear that the nomination of Donald Trump is a disaster for the conservative movement, the Republican Party and the United States. That’s probably enough to earn him a place in the history books.