Dear Eric Trump, I am not you: Life as the Doppelgänger of a Trump scion

My name is also Eric Frederick Trump, and I get letters, emails and phone calls meant for Donald's son 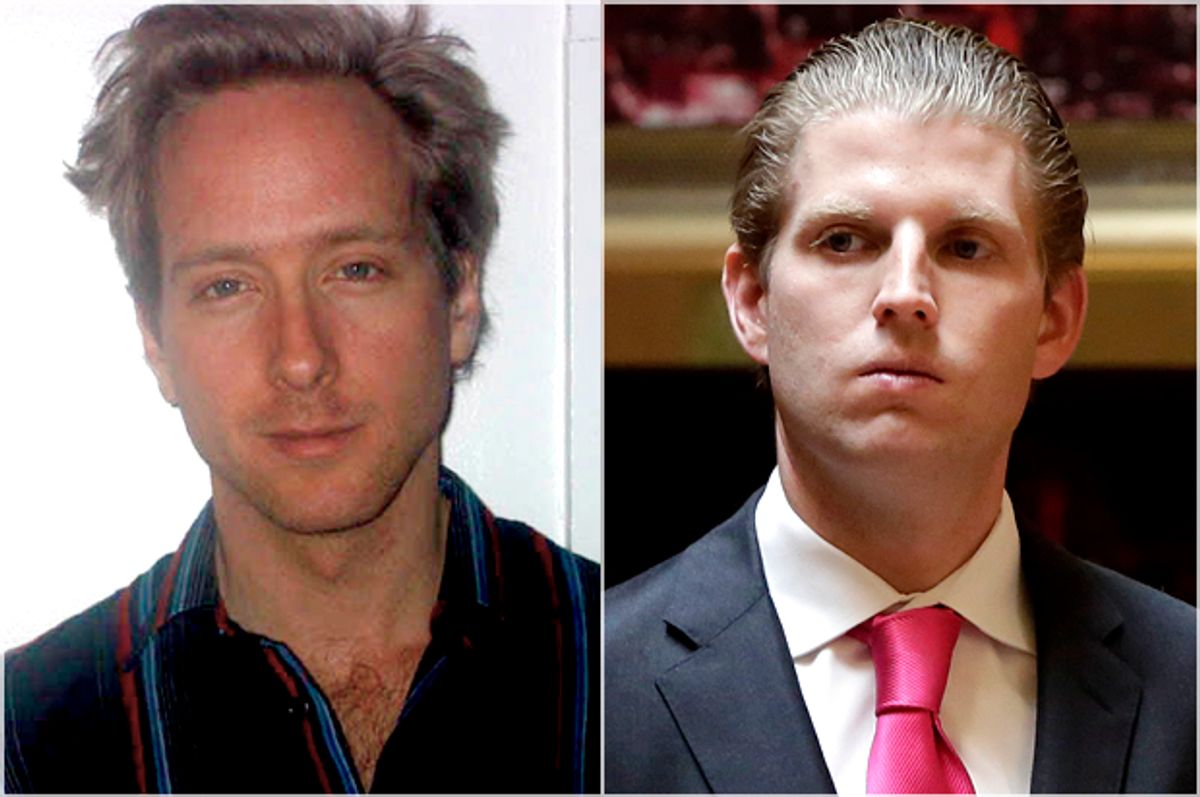 My name is Eric Frederick Trump. Can I call you Eric? I feel I know you. We are in a long-term relationship, though only one of us, until now, has known about it.

There is something going on here. Something very strange.

Let me explain. For years, I have been fielding your calls and receiving your correspondence (no suspicious white powders, yet). Now is the glorious Summer of Trump, and I need to sort out this matter of nomenclature and apprise you of the dead letters that continue to arrive at my door and my inbox.

This is a true story. I swear I exist. I still have my birth certificate and am happy to release it. Or you can go to Amazon.com and look up “Eric Trump, verbs, German” (you have to be very precise if you want to find me). There, squashed between Daddy-T’s “Never Enough” and “Think Big: Make it Happen in Business and Life,” you’ll find my modest book, “501 Essential German Verbs.” (I said it was modest—and available for only $5.69!).

I know you, but you don’t know me. I think that makes me your Doppelgänger, your double, Hyde to your Jekyll, Latif Yahia to your Uday Hussein. We share more than a name. Like you, I have blond hair and blue eyes and live in New York. You’re taller, but my wife says I am better looking. My family comes from Germany (like your mother, mine has a suspicion-arousing accent), and my grandfather’s name, like yours, was Frederick.

Despite these similarities, we are not replicas. You belong to the one percent, while I dwell among the 99 percent (I took the royal road to peonage and studied literature). You command respect. My daughter’s pesky friends taunt me with “Your name is Eric Frederick Donald Trump.” They point to spinning cotton candy on July 4th and shriek with malicious glee, “Is that where your father got his hair?” You make business deals; I teach. You are a recognizable personage. I am lucky if my students know my name once semester ends. You’re the prince; I am the pauper who knows how to wield a semi-colon. People around the world search for you (I know because I have read their words), but they find me. Our name joins us. Our name threatens to erase me (go on: try googling "me").

What’s in a name, you might ask. Papa Don goes by many Dononyms: Agent Orange, Orange Ozymandias, Cheetoh-faced, ferret-wearing shit gibbon (here we must protest in the name of gibbons everywhere). I have but one name. I would gladly doff it and say I am myself and not a Trump. Alas, I can’t Dump Trump, though it be my enemy. I’ve been shanghaied onto the Trump Train by my name. Your name. Our name.

I am your lightning rod, diverting the curious and the crazy from their target. Here’s what I mean:

When I lived in Manhattan, a woman with a slurred, unidentifiable accent who claimed to be my (your) mother left repeated messages on the answering machine, once even singing, “Happy Birthday Donald.” There was the man from Florida who called, praising your (our?) father, offering a brief business proposal, and concluding with a humiliating plea for money. A gardener in Morocco asked for business advice (I gave him the same counsel you would have: be kind and fair at all times).

A military officer and anti-terrorism specialist once wrote me an email asking if I am the Eric Trump (I said yes, I am the Trump who is a bit of a whiz at conjugating German verbs).

Did you take a trip to Mexico in the early 2000s? Someone sent swoony glossies of bright fish and azure waters to my apartment in Harlem. (Why she thought you were living incognito in a fifth-floor walk-up I can’t explain.)

Once I was in a New York hospital for minor surgery holding a binder with the name TRUMP written on it. A raspy voice called out: “Eric? Is that you?” I turned to see a supine, fading man. “Your father and I used to fight the goddamn unions together!” I hastened to correct him: “Oh, I’m not that Eric Trump.” He looked crestfallen: “Oh. Say hi to your father. He’s a great guy.”

People just want to believe in the presence of Trumpness.

These days, our last name isn’t just a brand. It’s a beacon. A baffled nation turns its fevered eyes to the orange light, seeking solace, answers. A rage commensurate with its own. I have run from my name and relocated to the Hudson Highlands. I know what you’re thinking: when’s the last time a Doppel was able to escape his Gänger? Like Harry Potter, who is pursued relentlessly by letters of acceptance to Hogwarts School of Witchcraft and Wizardry, the Trumpkins are finding me.

Exhibit A: Amy T., from the wilds of Pennsylvania, recently wrote a letter to “Mr. Trump,” a moniker that embraces you, DJT, and me. Now I am being doubly doppelgängered. She begins her epistle, which reads like a missile to crippled America: “DEMOCRAT NO MORE” and goes on to explain how Lyme disease, borne by a “disgusting, 8-legged, microscopic deer tick” (is this a veiled epithet for Hillary Clinton?), has “provided me with an unprovoked sentence of pain” (here, I think Ms. Thompson might be referring to something much larger and less precise than Lyme, like living in America). Mr. Trump, she continues, is the man to cure her and make things right because “well, I’m sure you have the answer to this...” At the last moment, Thompson’s rant recedes and the Letter to the Father becomes a billet doux: “With all due respect Mr. Trump...I love you, and love what you are trying to do for our country.”

Well, I’ve taken enough of your time. I trust you grasp the scope and urgency of this problem. For all I know, you are in the possession of love letters to me. They say it’s dangerous to meet your Doppelgänger in person. You might cancel me out more than you already have. Or we’ll dissolve into each other, like Narcissus and his reflection. I say we risk it. We can exchange our star-crossed correspondence and discuss a pseudonym for you. I suggest we meet at the 21 Club. I hear the Trump Burger is delicious.

Eric Trump is a writer and translator who teaches German literature at Vassar College. He is writing a book about organ transplantation.