His dark materials: After that diabolical, masterful performance, Donald Trump could easily end up president 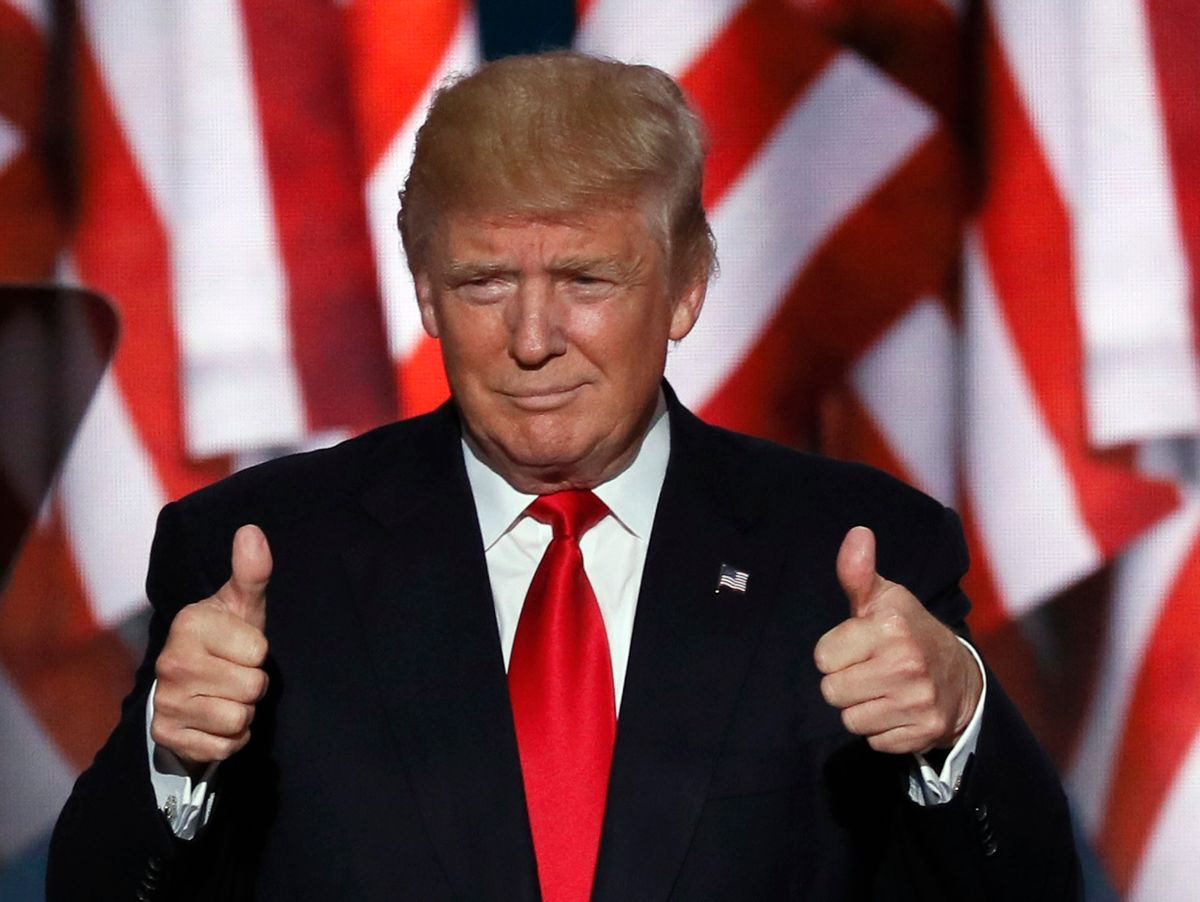 CLEVELAND — It’s not OK that the Republican Party nominated Donald Trump as its presidential candidate. That clearly suggests that reality has stripped a gear and we have careened off into a deeply stupid alternate dimension that resembles a 1980s straight-to-cable sequel to “They Live.” It was definitely not OK to be inside Quicken Loans Arena as Trump accepted that nomination, giving a speech that was sometimes profoundly awkward and went on much too long but was also — it’s always better to face the truth — a masterful display of demagoguery and manipulation.

From the ashen, haunted faces around me in the press gallery, and the conversations over hastily guzzled drinks before and after, I feel sure I wasn’t the only person here who felt as if he were suffering from PTSD, sunstroke and a stomach virus, all at the same time. Still, it was an educational bout with the existential flu. Anybody who still thought Donald Trump was a joke and a dumbass who would humiliate himself and his party go down to Mondale-scale defeat now knows better. You can pick Trump’s speech apart and examine its flaws, of course, but from the point of view of performance and dynamics only one verdict is possible. He killed it. He. Killed. It.

Michael Moore said the other night on Bill Maher’s show that he now thought Trump would win the election, and that feeling has been sneaking up on me for months now. There are valid statistical and demographic arguments that suggest otherwise. My colleague Amanda Marcotte has been asking all week: What states, or what groups, does Trump win that Mitt Romney didn’t? That’s a conversation for another time. But if Hillary Clinton does indeed defeat this guy, it’s gonna be a nail-biter.

In a few different ways, Trump’s acceptance speech hinted at the traditional pivot toward the center expected of a nominee moving into the fall election. He said the word “wall” just once — it will be a “great wall,” of course — and alluded only indirectly to his infamous proposal to ban Muslims from entering the United States. He made headlines by uttering the appellation LGBTQ twice, very carefully, and then congratulating the crowd for not booing at his assertion that citizens in that category had rights. He said “Latino” twice, instead of the more Republican-friendly English word “Hispanic.”

Trump described himself as a Republican just once, during an acceptance speech at the Republican National Convention. He never used the word “conservative” at all. Go ahead; pull up the transcript, hit control-F and type it in: 0 of 0. Jeb Bush and Mitt Romney would be spinning in their graves, if they were dead, and right now they wish they were.

Trump also signaled clearly that he knows where Hillary Clinton’s vulnerable spots are. He attacked “nation-building” and “regime change,” central elements of bipartisan foreign-policy dogma for the last 20 years that have been variously implemented by Bush-Cheney neoconservatives and Obama-Clinton liberals. He attacked free trade in general and Bill Clinton’s disastrous NAFTA deal in particular. Watching a Republican nominee vow to avoid overseas wars and shut down free-trade treaties is vivid proof that the membrane of history has been punctured and we’ve gone sloshing through it, covered in amniotic fluid, into some “Man in the High Castle” reality. As someone in my Twitter feed observed earlier in the day, we won’t hear those promises next week in Philadelphia.

But you don’t need me to tell you what Trump said, or how well it was calibrated. What you might not have felt on TV was the level of emotion flowing from the crowd to its Dear Leader and back again, which at certain moments hit a 7.5 on the Nuremberg scale. When he got the crowd wound up into chanting “Lock her up! Lock her up!” — which was about Clinton’s foreign-policy record, not the email scandal — and then smiled his Cheshire-cat smile and said, “Let’s defeat her in November,” it was like watching a maestro conduct an orchestra. OK, kind of a crappy pops orchestra in someplace less cosmopolitan than Cleveland, but still.

“I am your voice,” Trump twice told the delegates and onlookers. It’s not something that normal political candidates say. It’s more like — hmm, I’m thinking here —perhaps something demagogues and dictators would say. One of his biggest applause lines came when he told us he understood the mendacity and corruption of American life better than anyone, an indirect reference (I suppose) to all the stories about his bankruptcies and bad business deals. “Nobody knows the system better than me,” he said, “which is why I alone can fix it.”

I alone; I am your voice. Trump’s entire campaign has been about the greatness of Donald Trump, but it’s a mistake to assume that’s a strategic flaw or a liability. What you hear people say over and over about Trump — meaning people more or less like me, who don’t like him — is that he doesn’t seem like a real person. That’s pretty much the idea, and to assume that’s a bad thing, when it comes to channeling the collective fantasies of the American people and getting elected president, is simply wrong.

You hear all kinds of theories: Trump “has no interior life,” another journalist told me, outside in the blasting summer heat of Cleveland before the speech began. He has a narcissistic personality disorder or is perhaps a sociopath, incapable of empathy for others. Those words and phrases may contain fragments of truth, but they just circle around a central fact that came to me clearly this week. It requires more elaboration than I can offer right now, but here's a start: Trump represents a specific modern personality type, one that was molded and enabled by consumer capitalism and then perfected by the Internet. He’s an avatar, a cartoon character or a troll, depending on your frame of reference.

Ivanka Trump said it after her own fashion, while introducing her father: “Donald Trump is incapable of thinking small.” Being impregnable and invulnerable and indeed indecipherable — possessing no inner life, no discernible ideology and no personality — are not bugs in the Trump avatar’s program. They are essential features of its success. If he could fly or read minds or see the future he would be even better suited for the job of American dictator, and given the slipped gears in the reality matrix those possibilities can’t be ruled out. Trump is dangerous precisely because he does not seem like a real person, and the people voting for him do not think they’re voting in a real election with real consequences. He is an empty symbol with no point of reference, a goblin of nihilism wearing a mask of hope.

Laurie Penny, a young British journalist, gets at some of this in a truly terrifying article this week about the banned Twitter abuse king Milo Yiannopoulos, a person I would rather not know about at all whom Penny seems to like. Penny could not have known, unless she has Trumpian psychic powers, that the Republican nominee would tell his followers he was their voice, but that’s exactly how she puts it. People like Trump and Yiannopoulos (and Ann Coulter and Boris Johnson), she writes, are “pure antagonists unencumbered by any conviction”; people who “channel their own narcissism to give voice to the wordless, formless rage of the people neoliberalism left behind.”

Just as I was reading Penny’s article, the writer Hari Kunzru tweeted a quotation from “Minima Moralia,” a 1951 screed by misanthropic Marxist philosopher T.W. Adorno so bitter that even I have not read it. Adorno complains about “the individualities imported into America, and divested of individuality in the process,” who are known as “colorful individuals.” (He uses the English phrase in the German original.) “Their eager, uninhibited impulsiveness, their sudden fancies, their ‘originality,’ even if it be only a peculiar odiousness, even their garbled language, turn human qualities to account as a clown’s costume.”

Adorno could only imagine such a person as a servile entertainer; unlike Donald Trump, he was incapable of thinking big. In the upside-down world that Penny describes, where a person creates his brand by humiliating others and the once-ludicrous specter of President Trump is now conceivable, peculiar odiousness becomes the pathway to power, and the servile clown becomes the master.