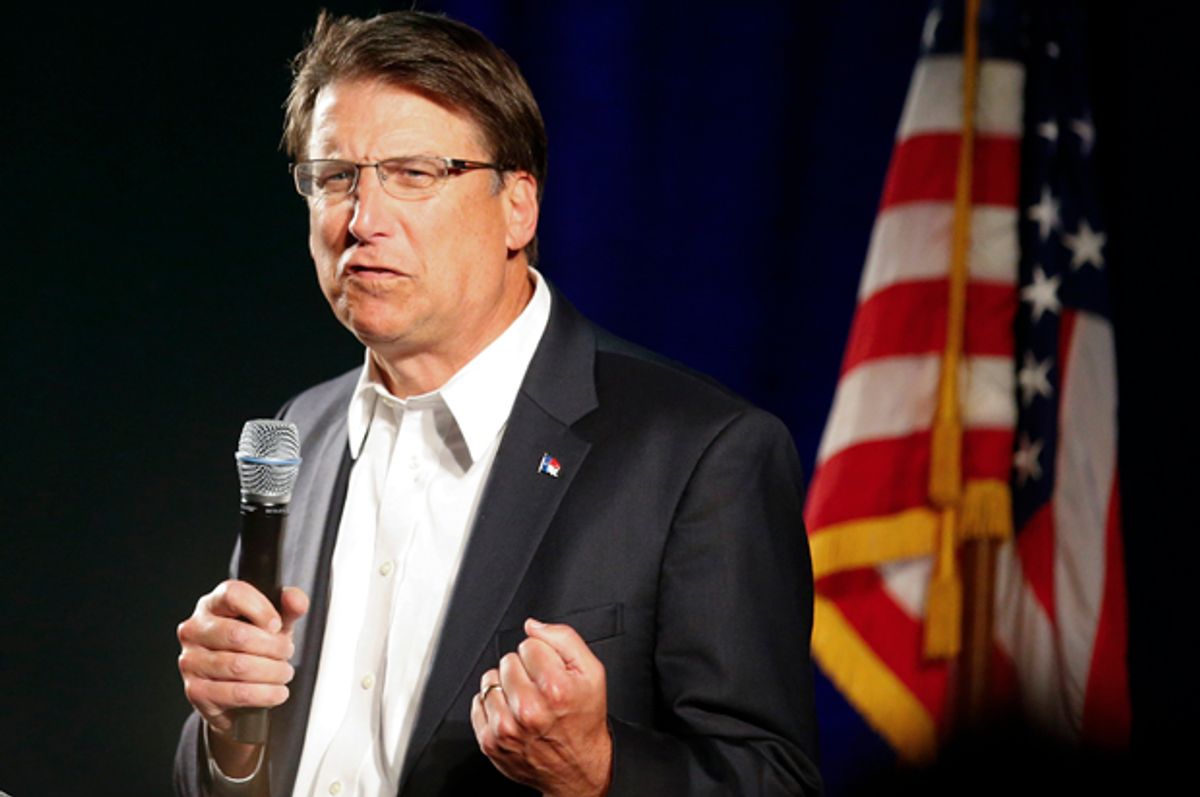 It's pretty hilarious — in a horrible, repulsive, you-remain-a-human-disaster way — when an arrogant bully boo-hoo-hoos upon the discovery that actions have consequences. It's poetic when those who actively work to hurt others and rail about how everybody's just so damn "sensitive" nowadays pitch the biggest tantrums when their feathers are ruffled. Poor babies!

On that note, feel free to bust out the world's smallest violin this week for North Carolina Governor Pat McCrory, who had some fighting words Thursday after the NBA announced that it will move its 2017 all-star game from Charlotte. The league issued the statement that "Since March, when North Carolina enacted HB2 and the issue of legal protections for the LGBT community in Charlotte became prominent, the NBA and the Charlotte Hornets have been working diligently to foster constructive dialogue and try to effect positive change. We have been guided in these discussions by the long-standing core values of our league. These include not only diversity, inclusion, fairness and respect for others but also the willingness to listen and consider opposing points of view…. We do not believe we can successfully host our All-Star festivities in Charlotte in the climate created by HB2."

Turner Broadcasting, which airs the game, soon after issued a statement of support.

HB2 is the state's controversial law, passed last March, which tamped down any local movement to extend anti-discrimination regulations to members of the LGBT community, and prevents transgender individuals in government buildings — including schools — from using the bathrooms that correspond to their identity. In May, the ACLU challenged the bill and asked the state to block the enforcement of it, saying it is a source of "ongoing and serious harm."

The fallout was felt quickly — and the whining soon followed. In April, North Carolina Representative Mark Walker, unclear on the meaning of the word "bully," fumed when Bruce Springsteen cancelled a show in Greensboro to protest the state's poor stance on LGBT rights, saying, "Bruce is known to be on the radical left and he’s got every right to be so, but I consider this a bully tactic."

Then on Thursday, McCrory issued a statement that "The sports and entertainment elite, Attorney General Roy Cooper and the liberal media have for months misrepresented our laws and maligned the people of North Carolina simply because most people believe boys and girls should be able to use school bathrooms, locker rooms and showers without the opposite sex present."

Okay, I'm going to stop right there and say, AGAIN, trans men and women are not the opposite sex. That's not how it works!

He went on to say that "Left-wing special interest groups have no moral authority to try and intimidate the large majority of American parents who agree in common-sense bathroom and shower privacy for our children. American families should be on notice that the selective corporate elite are imposing their political will on communities in which they do business, thus bypassing the democratic and legal process."

If by "large majority" he means 46 percent, okay. And if by "the democratic process" he means a business making an independent decision about where it wants to hold a sporting event, sure.

Speaking with the Charlotte Observer Friday, McCrory went on to bemoan, "I strongly disagree with their decision. To put it bluntly, it’s total P.C. BS. It’s an insult to our city and an insult to our state." He says that "I do think there is a politically correct elite that is having selective outrage." And in conversation with WFAE, he warned of "an Orwellian type of situation in our country in which the thought police are purging anyone who disagrees with their particular political opinion." Dude, it's not a political opinion being opposed here, it's a law of your friggin' state.

As the Huffington Post noted in May, he's been fighting against LGBT protections for 25 years. Back in 1991, he insisted that "No other group should be given special status, and this community is often wanting special status."  And as mayor of Charlotte, in 2006 he supported a local YMCA's choice to refuse membership to a family membership for two dads and their son, saying, "The YMCA has every right to set their membership criteria."

If you want to hide behind ignorance as an excuse for bigotry — and you can somehow enforce that bigotry on a governmental level — that's on you. But grow up and understand that actions have consequences, and in a free country, people don't have to support your big bag of nonsense. So enjoy the mess of your making McCrory, and enjoy the All-Star Game — from your couch.