The German-born shooter, Ali Sonboly, was likely inspired by right-wing extremists. He was not at all religious 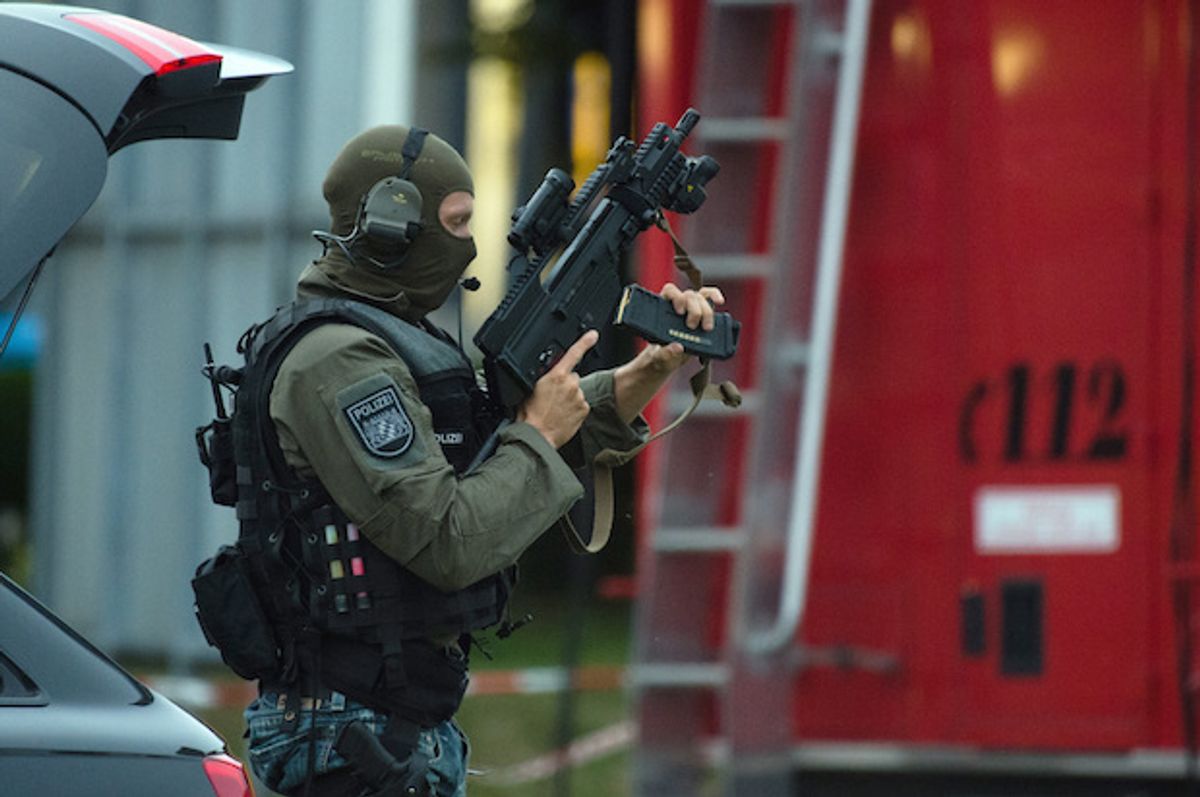 Police near the shopping center where a mass shooting took place in Munich, Germany on Friday, July 22, 2016 (AP/Matthias Balk)
--

A German gunman likely influenced by right-wing extremists killed nine people and injured 27 more in a mass shooting on Friday.

German police said the shooter was "obsessed" with mass shootings.

Munich police chief Hubertus Andrae said the link between Breivik and the Munich shooting is "obvious," the BBC reported.

The Munich shooting took place on the fifth anniversary of the massacre Breivik carried out in Norway, in which he murdered 77 civilians, the vast majority of whom were leftists at a political activism camp.

Moreover, the shooter used a photo of Breivik as the profile picture on his phone's WhatsApp messaging service.

Dr. Peter Langman, author of the book "Why Kids Kill," which was found among the gunman's possessions, told The Telegraph, "A lot of young shooters look for an Anders Breivik, or someone similar, as a role model. And since the attack was on the anniversary of the Norway attack, it suggests he was imitating Breivik."

Ali Sonboly, the 18-year-old gunman, was born in Munich. He was of Iranian descent, but had little connection to Iranian culture. In fact, while carrying out the attack, he shouted, "I am German!"

During the massacre, German bystanders reportedly shouted "Fu**ing Turks!" and "Fu**ing foreigner!" Sonboly yelled back, "Because of you I was bullied for seven years!" "I am German!" and "I was born here!"

German authorities said Sonboly had no links whatsoever to any Islamist groups.

Some have tried to link the attack to Islamic extremism, but the shooter was not religious. An acquaintance told the media, "He wasn't at all religious."

Authorities said the gunman had previously received treatment for depression in psychiatric care.

Former classmates also noted that Sonboly had often threatened them while they played violent video games, with which he was "obsessed." They eventually kicked him out of their group because he made so many threats.

Police said Sonboly posed as a teenage girl on a fake Facebook account to lure victims to a shopping mall and McDonalds, where he gunned them down.

Most of the people killed were teenagers.

Right-wing extremist violence is on the rise throughout Europe. Much of it is directed at refugees, migrants and Muslims.