Citizen Kaine: Why the safe pick is the completely smart pick for Hillary

Who cares if he's boring? Choosing a good, seasoned soldier was the right move for Clinton 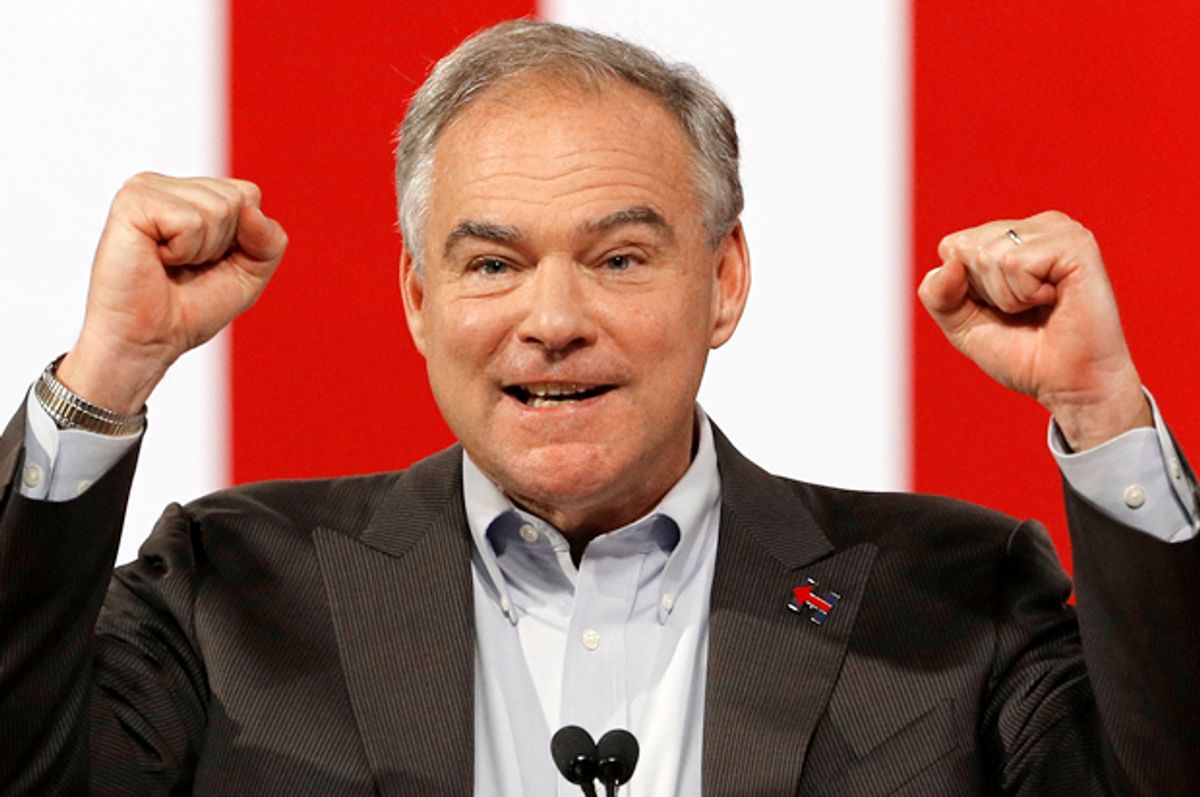 The most fun part of watching Hillary Clinton select Tim Kaine as her vice presidential running mate is counting all the ways in which this pick has something for everyone.

If you are a Donald Trump supporter, you hate it because you dislike Democrats, rationality, civil rights lawyers who have fought for black people, and anyone who falls to the left of Benito Mussolini on the political spectrum.

If you are a progressive, you can be happy because of some of the ideals Kaine has pursued throughout his adult life – as a missionary to Honduras, as the mayor of a majority black city who worked to get more public schools opened and sent his children to them instead of to one of Richmond’s well-regarded private institutions, his early career working as a fair housing lawyer on behalf of African-American clients in Richmond. As someone who grew up in southern Virginia during the timeframe he undertook that fair housing work, I can attest that it would have been no small feat.

If you are a progressive, you are also unhappy about Kaine’s support of the Trans Pacific Partnership and deregulation of smaller community banks. You may also be unhappy about his personal opposition to abortion and his past support of some legal restrictions on the practice, though it is highly doubtful any of that will come into play during a Hillary Clinton administration. But you can also be impressed by fights he waged against the tobacco, gun and coal lobbies while governor of Virginia, of all places.

If you are a conservative, you are the exact opposite: you probably dislike Kaine for waging those fights, and also because he is now so deeply entrenched with the hated Clintons.

There are two reasons I can think of why, policy positions aside, Kaine is a good choice for Clinton’s vice presidential slot.

The first is strategic. Should Clinton win, Kaine will resign the Senate seat he has held since 2012. Virginia’s Democratic governor, Terry McAuliffe, will appoint his replacement, who will serve until November of 2017. That replacement can then run in the special election, held in conjunction with Virginia’s off-year gubernatorial race, to serve out the rest of Kaine’s term, which takes us up to the 2018 midterms.

Here is why that is important. Historically, new presidential administrations have a shot at pushing ambitious legislation through Congress in the first two years. One of the reasons President Obama pursued healthcare reform when many of his advisors opposed doing so was because he knew that the midterm elections in 2010 would be highly favorable to the party out of power. (He underestimated just how favorable and Democrats wound up taking, in his words, a “shellacking.”)

Had Clinton selected one of the other senators under consideration – Elizabeth Warren, Sherrod Brown, or Cory Booker – that senator’s replacement would have been appointed by a Republican governor. In the case of the latter two, that means either John Kasich or Chris Christie. So the Republicans would have automatically gained a seat. With the margin between the majority and minority parties in the Senate likely to be razor-thin in the next Congress, ceding a seat to the Republicans would have been almost political malpractice.

So should the Democrats win control of the Senate this fall, as seems likely, Clinton will have a year, maybe two, to work on major legislation. After that, she’ll likely be defending any gains she might have made, especially since the 2018 map favors Republicans grabbing the Senate majority right back.

And yes, I know I’m ignoring the House here, along with what will likely be a continuation of Republican obstructionism in the Senate, where the Democrats might grab the majority but won’t have a 60-vote supermajority to overcome filibusters.

It’s unlikely the Democrats will grab back control the House, but should Trump prove to be so historically catastrophic a candidate that he drags down other Republicans with him and leave the party reeling, then Clinton and the Democrats will be well-positioned to take advantage.

It is a little simplistic and something of a long shot, and it relies in part on activists holding Clinton’s feet to the fire to get her to pass progressive legislation. But getting the pieces in place is a first step.

The other reason Kaine was a solid choice is pretty simple, and one you can see just by watching his speech at his introductory rally on Saturday: He’s a good soldier. He is not a firebrand who will distract from Clinton or lead an insurgency against her. (He can leave that to the progressives who will have newly-found power in the Senate. )He’ll toe the party line and stay in the background, doing the hard work of a high government official while attending the funerals and being an ambassador for the administration, the sort of drudgery that comes with the office of vice president, without complaint.

In other words, he’ll work with Clinton without causing her much extra stress. Which, since she’s Clinton and much of her own party and the GOP will have their knives out calling for impeachment before she is even sworn in, is no small thing.

Let us remember, people complaining that Kaine is boring: Bill Clinton will be living in the White House again. Between that and the insanity we’re going to see in the 100 or so days until the election, low-key and boring might be the greatest of all gifts.