Discord at the DNC: There's no need to worry about the opening day chaos 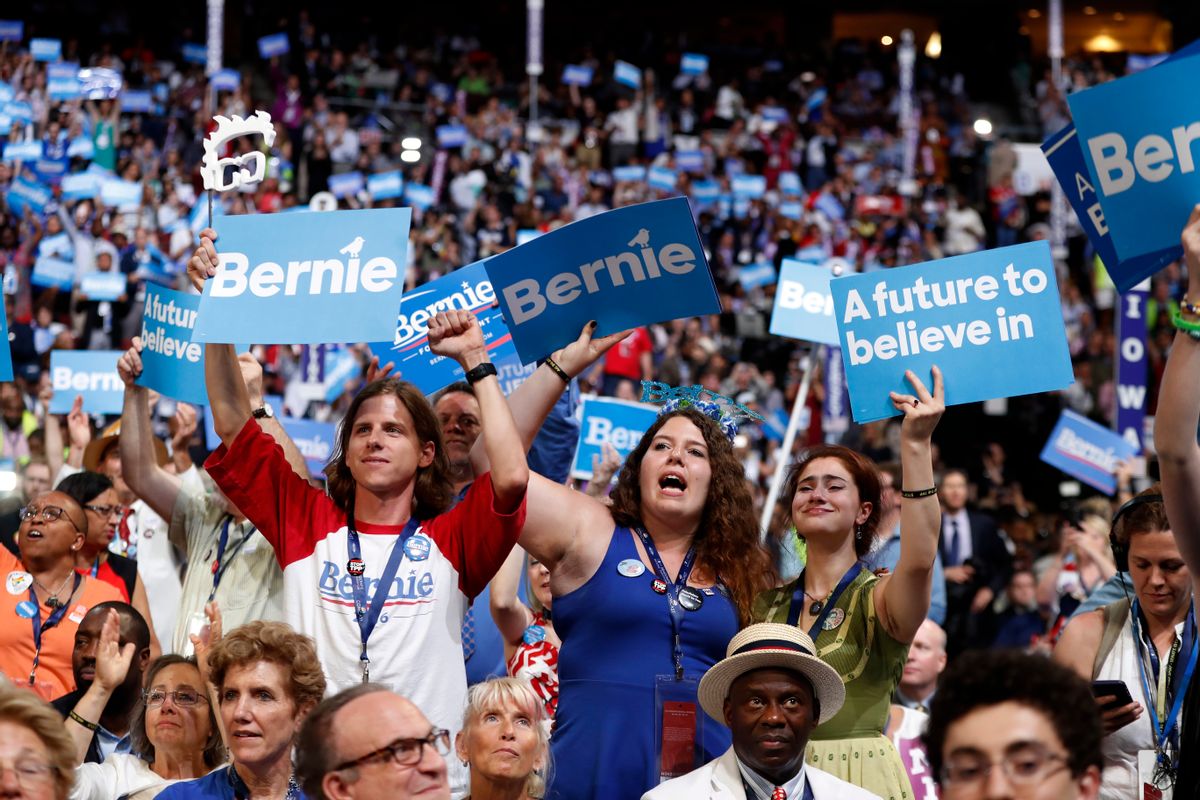 Day one of the Democratic National Convention started out the way we might have expected considering the weekend's events. Rep. Debbie Wasserman Shultz, who had been relieved of duty the day before, was still on the hot seat hanging on to the job of gavelling in the convention seemingly unaware of just how toxic she'd become at the Philadelphia gathering. Then she was booed by her own Florida delegation and within a couple of hours it was announced that she'd withdrawn from her duties at the DNC and rumor had it she had decided to get on a plane to Florida. In any case she was nowhere to be seen for the rest of the day. The reign of Wasserman-Shultz was finally over.

But nobody expected that at a rally for his delegates later in the morning Bernie Sanders would be booed as well when he exhorted his followers to support Hillary Clinton. The lusty booing at both events led to a day of breathless media reporting about crazed Sanders supporters promising to disrupt the convention. Reporters took to the streets to interview every odd duck protester they could find to back up their prediction. There were plenty of them. Philadelphia was crawling with thousands of protesters  for various causes and virtually all of them were Bernie Sanders supporters vowing never to vote for Hillary Clinton. Or so it seemed on television anyway.

As the time came for the convention to begin the delegates were rowdy and worked up and rumors were flying through the media that the Sanders delegates were planning walkouts and protests and promising to boo and jeer everyone who uttered the name Clinton on the stage last night. And for the first couple of hours it seemed as though that might be right. There were a lot of "Bernie" and "Hillary" chants which wasn't unusual at a political convention. But there were also some protests about the TPP and yes, some booing at the mention of Clinton. People were getting nervous.

But before long it started to calm down likely due to a couple of important gestures and entreaties. The first came in the form of a statement from the DNC signed by the new chair Donna Brazile:

“On behalf of everyone at the DNC, we want to offer a deep and sincere apology to Senator Sanders, his supporters, and the entire Democratic party for inexcusable remarks made over email. These comments do not reflect the values of the DNC or our steadfast commitment to neutrality during the nominating process. The DNC does not — and will not — tolerate disrespectful language exhibited toward our candidates. Individual staffers have also rightfully apologized for their comments, and the DNC is taking appropriate action to ensure it never happens again."

Then Sanders sent this text to his supporters:

Our credibility as a movement will be damaged by booing, turning of backs, walking out or other similar displays. That's what the corporate media wants. That's what Donald Trump wants. But that's not what will expand the progressive movement in this country. I know everyone is frustrated especially by the the recent DNC disclosures. But as a result of this disclosure Debbie Wassserman Schgultz was forced to esign. This is a very positive sign. We have made great progress in the last year. Let's continue going forward. I would ask you as a personal courtesy to me to not engage in any kind of protest of demonstration on the convention floor.

Going forward there were some scattered chants that were mostly unintelligible but as the night wore on the focus turned much more toward the speakers and less toward the audience. If there was continuous booing and heckling in the hall the television audience didn't hear it.

The contrast between the speakers line-up at the RNC and the DNC couldn't have been more stark. Where the Republicans offered up D-List TV stars and unknown athletes, the Democrats had Sarah Silverman (who gave the Bernie or Bust folks a little piece of her mind about the booing) and Demi Lovato and the classic singer songwriter Paul Simon, whose song "America" had been the soundtrack for a beautiful poetic Bernie Sanders ad during the primaries. (He chose to sing "Bridge of Troubled Waters" which was a perfect theme song for the day).

The political stars were even more impressive. Unlike the RNC which seemed to require hate speech from every person on stage culminating in a full blown primal scream by the keynote speakers, who incited shrieks of "lock her up!" or "Hillary for Prison" from the crowd,the DNC speeches were upbeat and optimistic. To the extent that Trump was even mentioned it seemed to be almost in passing. The focus was on specific issues, the future and the particular qualities and qualifications that made Hillary Clinton the right person to lead the country into it.

By the time the prime time speakers, Corey Booker, Michelle Obama, Elizabeth Warren and Bernie Sanders spoke the crowd was primed for some inspirational oratory and they got it. Booker overcame the last of the heckling and energized the crowd. Michelle Obama gave the best speech of the night, by far, making the most personal case for Clinton in the most poetic terms. (Melania Trump will have a lot to work with for her future speaking engagements.) Warren spoke to the progressive Democrats to persuade them that Clinton's tenacity and fighting spirit made her a strong advocate for the cause and Sanders gave his followers exactly what they were looking for, an impassioned entreaty to keep their progressive movement alive past the election.

It wasn't Pollyanna night by any means. There was plenty of criticism of the system and a long list of issues that need attention. But it wasn't anything like the Darkness at Noon dystopia of the RNC. Instead of promises to "Make America Great Again" which implies a return to the past, these people made a pitch for making America's better for future generations.

It's possible the discord that characterized much of day one prior to the big speeches will continue today and beyond. It's also possible that there will continue to be disagreements on the floor and some protests could still break out in the hall. (There has been some talk of a walk out on Tim Kaine on Wednesday as well as some other demonstrations.) There will almost certainly be plenty of people in the streets protesting for their causes. Democratic Party politics has never been entirely well-behaved.

But this first day was actually pretty interesting and pretty inspiring. Maybe a little passion and a little drama isn't such bad thing after all.