Elizabeth Warren's DNC speech made a crucial point about Trumpism's racial hatred: nobody benefits except the rich 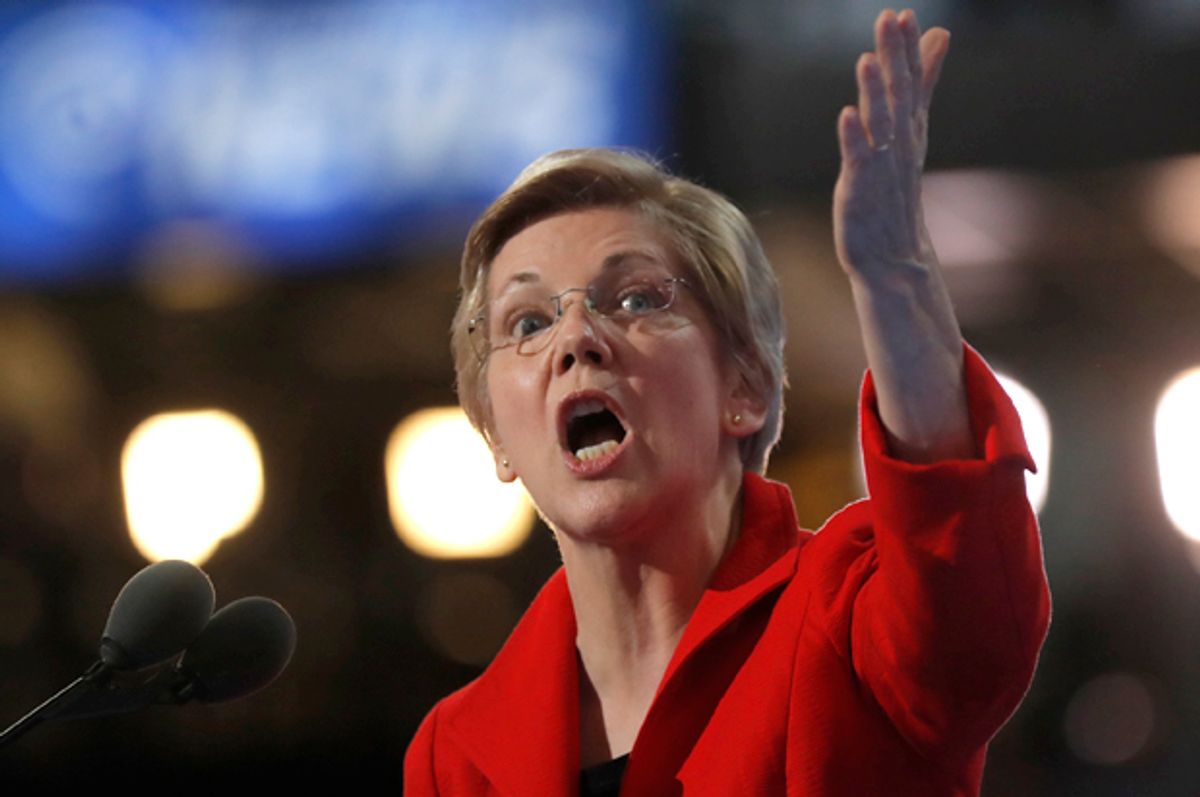 The Democratic National Convention got off to about as rough a start as you could imagine, with the party committee chair abruptly resigning and her replacement fending off choruses of boos from delegates loyal to Bernie Sanders. But the proceedings eventually settled down and the acrimony steadily waned as the primetime slate of speakers all turned in strong performances. There are plenty of potential highlights to choose from, but there was one passage from Sen. Elizabeth Warren’s speech that stood out to me as one of the more effective and damning indictments of GOP nominee Donald Trump offered up thus far.

Warren’s speech had all the familiar attacks on Trump that we’ve all heard countless times already – he cons people out of their money, he’s filed for bankruptcy several times, he’s a predatory goon who celebrated the 2008 collapse of the real estate market, etc. But after laying all that out, Warren delved into “the really ugly underside” to Trumpism:

That’s Donald Trump’s America. An America of fear and hate. And America where we all break apart. Whites against blacks and Latinos, Christians against Muslims and Jews, straight against gay, everyone against immigrants. Race, religion, heritage, gender – the more factions the better.

But ask yourself this. When white workers in Ohio are pitted against black workers in North Carolina, or Latino workers in Florida, who really benefits? Divide and conquer is an old story in America. Dr. Martin Luther King knew it. After his march from Selma to Montgomery, he spoke of how segregation was created to keep people divided. Instead of higher wages for workers, Dr. King described how poor whites in the South were fed Jim Crow, which told a poor, white worker that, quote, “no matter how bad off he was, at least he was a white man, better than the black man.” Racial hatred was part of keeping the powerful on top.

All too often, attacks on Trumpism focus on the people and groups it specifically targets: the immigrants (and their families) who will be rounded up and deported, the Muslims who will live under constant government-encouraged suspicion of involvement in terrorism. What Warren did with this speech is make the critical point that the people who think they stand to benefit from Trumpism’s hatred and division are being fed a lie. They’re being led to believe that they will profit from a zero-sum game in which the declining fortunes of immigrants and Muslims will necessarily redound to their favor.

As Warren pointed out, using the apt and devastating example of Jim Crow, it’s all just demagoguery in the service of distraction. The real beneficiaries of Trumpism are the moneyed elites who want to stoke nationalist fervor and tribal divisions as a way to attain power, which will then be used almost exclusively for their own benefit. Donald Trump’s proposed tax plan stands as a bright, gaudy testament to this truth. The fruits of his tax-cut proposals would be enjoyed almost exclusively by the rich, with the top 0.1 percent of earners taking down an extra $1.3 million on average. Those at the bottom of the economic ladder, meanwhile, will get about $130. The broader fiscal impact of those cuts would be to starve the government of trillions in revenue, which would have to be made up somewhere – most likely with deep, gouging cuts to social programs.

That’s the point Elizabeth Warren made last night: Trumpism’s bilious racial attacks and gross factionalism are part of a distressingly familiar pattern in American history, and their overall impact will be to screw over everyone who doesn’t already run in Donald Trump’s social circle. There are no winners, and those who are spared Trumpism’s direct assaults are merely being taken for a ride.