In defense of Bernie’s boo-birds (sort of): Democratic dissent is not the party’s real problem 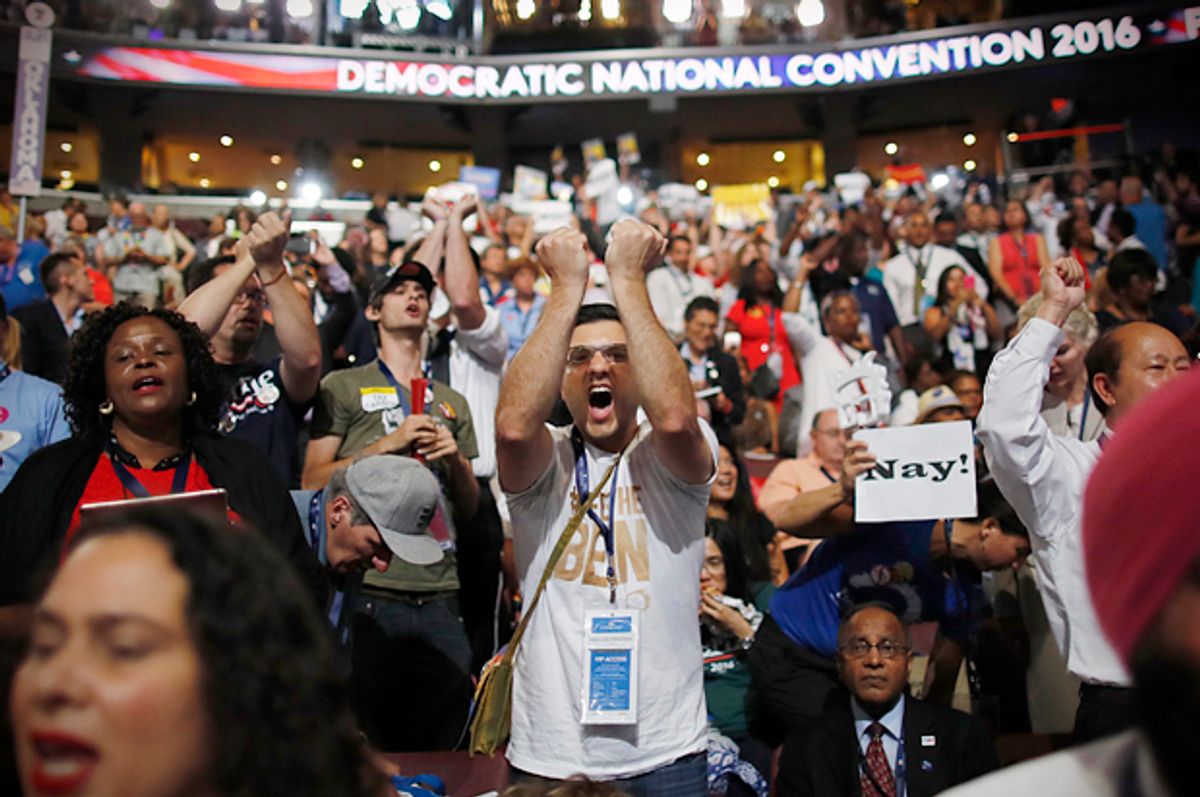 PHILADELPHIA -- If a few scattered outbreaks of booing by diehard Bernie Sanders supporters on the convention floor is the worst thing that happens to the Democratic Party in 2016, things will have gone very well indeed. That’s already not the worst thing, by a long shot: As things stand, the party is stuck running a widely disliked mainstream politician for president in a year of widespread and often incoherent populist outrage, against an opponent who is more like a human-sized sack of hornets than an actual human being. Much of the Democratic angst of the moment is fueled by a sense of weakness and the fear of having been wrong-footed by history. So much has gone south already, and it could get worse.

All the outrage and pearl-clutching and condescension being directed on Monday night and Tuesday morning at a small group of disappointed Sanders fans — many of them younger folks who are brand new to party politics, and whom the Democratic Party desperately needs — is grotesquely exaggerated. This is what democracy looks like, people! Deal with it. If the Democratic brand, to use obnoxious contemporary parlance, is so fragile that Hillary Clinton’s prospects of victory over the most cartoonish and least qualified candidate in history can be damaged by a little booing, then the entire party is in deep trouble.

That is the not-so-hidden meaning of this convention so far, as Robert Reich pointed out on Monday. Reich, who served in Bill Clinton’s cabinet and has known both Clintons since all three were law-school classmates, suggests that Hillary still hasn’t grasped the nature of the sudden political realignment of 2016. “The most powerful force in American politics today is anti-establishment fury” directed at corporate and political elites, Reich writes. “There are no longer ‘moderates.’ There’s no longer a ‘center.’” The viable choices are between “authoritarian populism,” meaning the Trump strain, and the “democratic populism” embodied by Sanders. We can see what happened to the Republican establishment that tried to battle this tide. As I argued months ago, the Democratic establishment is not all that far behind.

So this abrupt turn toward shaming internal dissenters, and this insistence that a false front of ideological unity is the only path to victory, is a sign of intense weakness and unease. As with the hilariously sudden banishment of party chair Debbie Wasserman Schultz — whose name and signature appears on the credentials worn by every convention attendee, but who is nowhere to be seen — the quasi-Soviet conformity belies much of the Democratic happy talk of Day One in Philadelphia. Michelle Obama, for instance, delivered a beautiful speech loaded with soaring sentiment and heartfelt principle, one which seemed to describe some other universe where if not for Republican bile and bigotry things would be wonderful. It takes a Potemkin village.

So a hardcore handful of Sanders supporters — not even close to a majority of his delegates, in my judgment — booed several times at the mention of a candidate they don’t like and don’t trust, and whom they have spent months viewing as an implacable enemy. Seriously: BFD. Was that the best possible optics for a party convention? No, but neither is “Get off my lawn and go get a haircut,” or an endless series of Chicken Little tweets about how an intemperate handful of Bernie loyalists will bring down civilization. You would think Democrats have had their institutional memory wiped, and have forgotten what this party used to be like before it was remade by Hillary Clinton’s husband and the Democratic Leadership Council and their Wall Street backers. Because they have.

I’m old enough to have dim memories of sitting on the couch next to my dad and watching wiggly black-and-white images of the vicious floor fights at the 1972 Democratic convention in Miami Beach, where party regulars fought into the roll call in a last-ditch effort to defeat George McGovern. Four years later, the same thing happened in reverse, as establishment liberals tried to derail the insurgent candidacy of a Southern moderate outsider named Jimmy Carter. Another four years after that, in 1980, Ted Kennedy waged a nearly unprecedented struggle against Carter — an incumbent Democratic president! — that went all the way to Madison Square Garden. Kennedy only endorsed Carter late and begrudgingly, giving a fiery convention speech that only mentioned the party’s actual nominee once. Bernie Sanders has already done far more to support Hillary Clinton than Kennedy ever did in that campaign.

Was there booing at those conventions? And name-calling and vitriol? And threats to stay home or bolt to the other party, and prognostications of electoral doom? You bet your ass there was — all day long. Every commentator at every one of those conventions hauled out the Will Rogers line about how he didn’t belong to any organized political party because he was a Democrat, the wounds more or less healed, and life went on. Now, I can see you raising your hand in the back to remind me that the doomsayers were right, at least in 1972 and 1980 — and before that, too, in the disastrous implosion of Chicago 1968. It’s a worthwhile point, and there’s no question that those experiences left the party permanently scarred. (It sure would have been interesting to see Kennedy run against Ronald Reagan, although I doubt the result would have been different.)

But my larger point is that the Democratic Party of those decades understood that it was a vibrant, raucous coalition that thrived on internal discord, and didn’t mind hashing out its disputes in public. It encompassed Southern conservatives and Northeastern liberals and urban "white ethnics" and heartland populists and feminists and civil-rights leaders, and they definitely didn’t always get along. It also held congressional majorities for almost 30 years, and viewed itself with some justification as the central forum for American political debate and American social progress.

I imagine that both parties have marketing experts and focus-group data these days informing them that “the voters” prefer a smooth, upbeat stage-managed spectacle that delivers an anodyne message of unity. Republicans have always been better about that, and the grim gathering in Cleveland largely remained on message, despite the evident fact that many Republicans are angry and confused about the Trumpian takeover. But it was also a low-energy and often boring event, and except for the electrifying moments delivered by Trump’s acceptance speech and Ted Cruz’s Great Refusal, the upper reaches of the arena remained largely empty.

You couldn’t say any of that about Wells Fargo Arena on Monday night, where virtually every seat was full and the atmosphere crackled with anticipation. Bernie Sanders has injected new life and new possibilities into the Democratic Party, which now has a level of internal energy not seen since the pre-Clinton era. What we’re seeing right now are the party’s institutional antibodies in action, as they try to crush that new life and reject those possibilities.

I’m well aware that the nomination of Donald Trump by the Republican Party — once upon a time an organization of actual grownups, whatever their limitations — represents a national emergency. I was in Cleveland and sat through that speech in that arena, and although I got some pushback for my use of this term, it was about as traumatic as something can be that does not involve physical violence. I require no lectures from anyone about the obvious fact that the choice between a responsible and competent adult and a sociopathic charlatan is not a choice at all. Or the choice between a human being and a sack of hornets, as I put it earlier.

When it comes to Nov. 8, whether I like or dislike Hillary Clinton — and why, and how much — is not relevant. It’s a lot like the infamous French presidential election of 2002, between center-right incumbent Jacques Chirac and neo-fascist Jean-Marie Le Pen, except that France is or was a relatively sane country and Le Pen never had the slightest chance of winning. I have previously expressed my view that Clinton would be a pretty good president on domestic and social issues, and a pretty terrible one on foreign policy and national security. In terms of this year’s election, that hardly matters. I would feel approximately the same about the choice if Trump’s final-round opponent were Jeb Bush or John Kasich or some other recognizable mid-range politician with comprehensible goals and motives. I might support that person with more or less reluctance, but we’re talking differences of degree rather than kind.

But the national emergency presented by Trump and the chimerical quest for party unity and a spectacle of manufactured harmony are two different things. It is crucial to elect Hillary Clinton in 2016, as Sanders told his supporters forcefully on Monday night, and the vast majority of his supporters will end up voting for her, enthusiastically or otherwise. That’s an entirely different question from whether the boo-birds were sending the Democratic Party an important message, and whether it’s a message the party can afford to ignore.