Michelle Obama's dignified restraint: "When they go low, we go high" are words to live by

For too long we've let the low road lead. We can steer ourselves away from a culture of rudeness 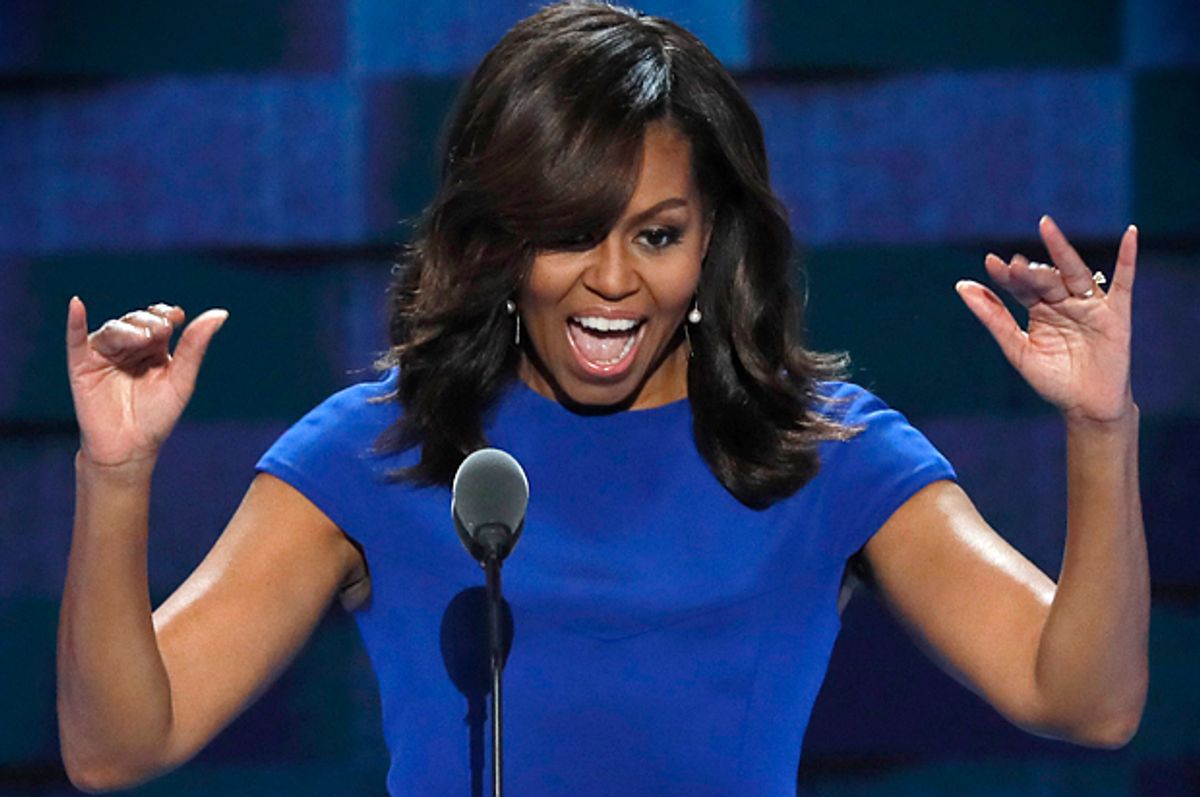 Here are some phrases I'd be cool with never encountering again. "Shuts down." "Destroys." "Drags." "Eviscerates." So much yelling out there. So. Much. Booing. Aren't you tired of fights and insults, too? If you are, then no doubt you too took in Michelle Obama's Monday night speech at the Democratic National Convention as a healing balm on a nation suffering from wide-scale sick burns.

In a speech that was to political rhetoric what Beyoncé is to everything else, the First Lady eloquently expressed her endorsement for "our friend Hillary Clinton" and laid out the legacy of her husband's administration. Along the way, she also articulated what it means to do the tough work of being the bigger person.

She said it, quite clearly, to the Trump supporters, and she said it to the Bernie-or-Busters. She revealed that she has to urge her daughters "to ignore those who question their father’s citizenship or faith." She talked about Mrs. Clinton, noting how "When she didn't win the nomination eight years ago, she didn't get angry or disillusioned…. There were plenty of moments when Hillary could have decided that this work was too hard, that the price of public service was too high, that she was tired of being picked apart for how she looks or how she talks or even how she laughs. But here’s the thing. What I admire most about Hillary is that she never buckles under pressure."

And most pointedly, in a message that ought to be familiar to anyone who's ever been or had a loving parent, she spoke of how she and Barack tell their daughters, "When someone is cruel or acts like a bully, you don’t stoop to their level. No, our motto is, when they go low, we go high."

The high road often feels like the world's roughest and least well-trafficked one. It also, it must be said, often feels like one that women and minorities are expected to travel far more than others. Watching Mrs. Obama Monday night, I was reminded of Jesse Williams' BET Humanitarian Award speech last month, when he pointed out that "The burden of the brutalized is not to comfort the bystander. That’s not our job." But what Michelle Obama was speaking to was the difficult, important, invisible work of not escalating the fear and divisiveness, of not becoming the things we despise. And you don't have to be running for President of the United States of America to take that message to heart.

It is super easy to loudly boo like a petulant child when you don't like what somebody is saying — and that boo will be heard when someone else's respectful, grown-up person silence is not. It is, believe it or not, super easy to "shut down" and "destroy" some Twitter idiot who knows literally nothing, whether that idiot is Donald Trump or a random egg with three followers. It would have been easy, on Monday night, for Michelle Obama to toss off a reference to would-be First Lady Melania Trump's speech last week, and how it blatantly stole from her own 2008 DNC address. She'd have earned it. But she didn't.

It's been almost 25 years since MTV gave us the indelible idea of "what happens when people stop being polite and start getting real," a phrase neatly tied to nearly everything that's happened in our culture since. It's a concept eagerly embraced by bullies like Trump — or just the jerks in our own lives. It goes like this — being "polite," aka dignified, respectable, restrained, or God forbid, nice, isn't "real." "Real" is angry, "real" is abusive. "Real" is racism and sexism and plain everyday-grade trolling wrapped up in the cloak of "free speech." Self-control is for the weak. Kindness and compassion are a sham.

But what if, trolls, you had to accept that the grace and class of Michelle Obama is real? What if behaving like an adult was really just being honest, and these public temper tantrums we've been watching play out in front of us were recognized as the poor impulse control they are? What if all of us remembered Michelle Obama's words the next time we're provoked? What if high was as true as low? That's the person I want to be. And that's the America I want to live in.