The grown-ups take over: Michelle Obama and Bernie Sanders did their best to silence the juvenile booing at the DNC 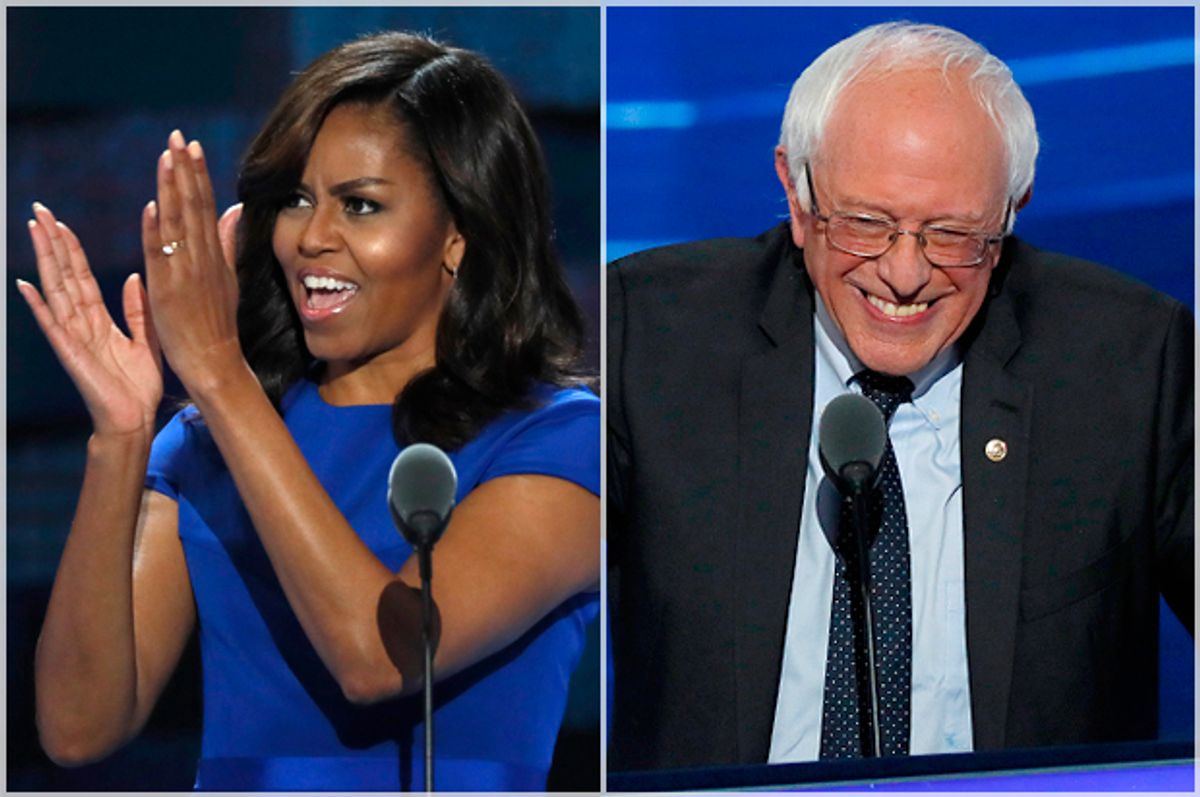 The early part of day one of the Democratic National Convention was marred by booing from embittered Bernie Sanders delegates. And with all due respect to my colleague Sean Illing, I disagree that it was inspired by the relatively minor Wikileaks leak of emails showing that some folks at the DNC prickled at the Sanders camp’s constant attacks on their party.

No, the impression I got was that these folks were going to boo, no matter what. The booing was rooted not in leak-based outrage, but in entitlement. The Sanders base of support has always been whiter and more male than the Clinton base, and losing out to a more diverse coalition stung for the kind of people who are used to winning.

The racialized nature of the booing, where folks like Marcia Fudge and Elijah Cummings got booed worse than Barney Frank — even though Frank has been far blunter in his criticisms of Sanders than his black colleagues — made these uncomfortable assumptions driving the anger harder to avoid.

The email “scandal” is just an extension of this. Nothing says “overly entitled” more than believing people that you have bashed openly and repeatedly in public — as Sanders campaign aides did to DNC officials — have no right to dislike you in private.

But while, as I reported, the booing was fierce earlier in the day, the DNC has to be commended for rolling out a program that both anticipated how bad it would be and successfully shutting it down.

As Illing argues, Sanders did a fantastic job driving home how much he has in common with Hillary Clinton. While there were fears that he would be booed, he was not, and it was not just because his supporters worship him like a rock star. It’s because he made his case for Clinton persuasively and booing in the face of it — quibbling over the 5% where they disagree instead of focusing on the 95% where they agree — would have shown exactly how little the booing has to do with “principles” and everything to do with bruised egos.

But it was Michelle Obama who deserves the most credit for turning the ship around.

"And I watch my daughters, two beautiful, intelligent, black young women playing with their dogs on the White House lawn," Obama said. "And because of Hillary Clinton, my daughters and all our sons and daughters now take for granted that a woman can be president of the United States. So, look, so don’t let anyone ever tell you that this country isn’t great, that somehow we need to make it great again. Because this right now is the greatest country on earth!"

Her speech was a perfect example of her mantra "when they go low, we go high". Her soaring rhetoric did not attack the booers directly, but it did serve as a reminder of how ugly it is to begrudge the diverse Clinton coalition their pleasure in breaking apart the white male death grip on power.

Between Obama, Sanders and Elizabeth Warren reminding the audience of how high the stakes are and how important it is to let go of one's petty resentments, most of the booing tailed off. But not all. As Charles Pierce noted, there were still some "bros" chanting "Goldman Sachs!" at Warren, who had been so long the shield "the left" used to argue they would totally support a woman if she was the right woman.

"At Elizabeth Warren, they chanted this," Pierce marveled. "I remain amazed."

Sadly, I don't. If it really was about some kind of righteous anger, instead of a thwarted sense of entitlement, then sure, screaming weird invective at a woman you used to say you admire makes sense. But it is what it is.

But those bros were a minority by that point in the evening. Most of the angry, roiling crowd had been shamed into silence by that point. Whether they will come roaring back, full of well-nursed bitterness again, remains to be seen.