Sanders delegates walk out -- in anger, in celebration and sometimes in costume -- vowing to continue the struggle 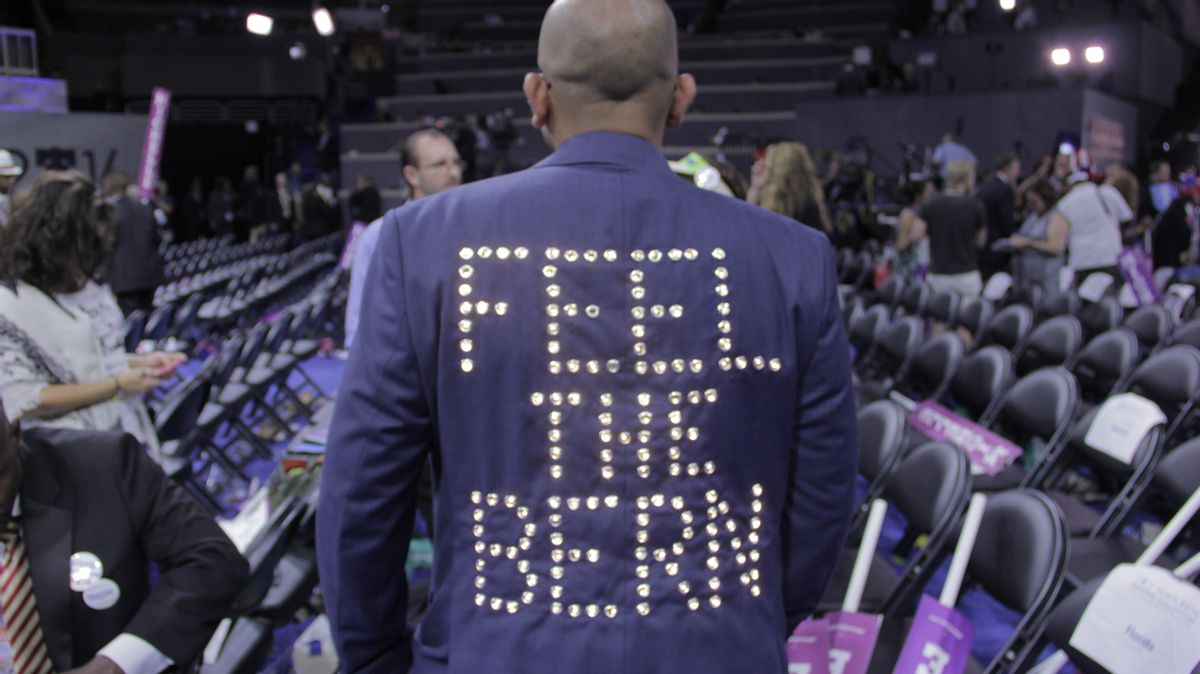 PHILADELPHIA -- An hour or so after Hillary Clinton became the Democratic presidential nominee, Bernie Sanders delegates came streaming out of the Wells Fargo Center into a muggy evening on this city’s southern riverfront. It was, one delegate told me, somewhere between a coordinated action and a spur-of-the-moment decision. By the time we got into the AT&T station at the southern end of the Broad Street subway line (yes, Philadelphia’s underfunded transit system has branded station names), at least 300 to 400 delegates were on hand, and it felt more like a party than a wake.

There was chanting and singing and sweaty group hugs and mock arguments about whether Utah or North Carolina is more awesome. Some people were visibly upset and crying, and others seemed angry, like the woman who stomped up and down the platform with an anti-TPP placard and a homemade button reading “Hillarys Lies Matter” [sic]. But another woman, the one in the Princess Leia outfit and the honey-bun hairdo, had turned around the Clinton campaign sign she had defaced to read “Hillary for Prison” so it was no longer visible. She still thought Clinton had stolen the nomination, and she still thought that Bernie’s troops would have a hard time “holding her feet to the fire” on the progressive Democratic platform. But she was talking about it calmly enough, for someone dressed as Princess Leia on a summer night in Philadelphia.

It really helped, I think, that the motion to nominate Clinton by acclamation was staged by the Vermont delegation and Sanders himself. (Yes, there were some audible “nays,” but the ayes really did have it.) It wasn’t a victory for Sanders and his people, needless to say, but it was a kind of victory in defeat. We all knew it was coming, but that was still an emotional moment that no one present, and no one who watched on television, is likely to forget. In the press gallery, people stopped their torrent of tweets and put their devices down; most of us stood up.

I have exhausted my feelings about Hillary Clinton for the moment, but she was the bearer of history on Tuesday. As she became the Democratic nominee I thought about my mother and my daughter; I thought about women I have loved in the past and the woman I love now. For all of those strong and complicated people, and for all of us, America is a little bit different today than it was yesterday. My son is growing up with no reason to believe that women and girls are in any way lesser beings, and will never find it extraordinary that the president might be female or black or gay or a person with a disability.

So for the Bernie celebration on the Broad Street line, part of the exultation came from having helped make history, even in defeat. Every Sanders delegate I spoke to said that the next and larger challenge was about translating their hero’s promise of “political revolution” to the state and local level. By definition the people who came to this convention are activists, but the ones who talked to me had already started to shift focus in impressive fashion — the only way the Sanders moment could have any lasting meaning.

Given the importance of this day, I spent most of my time interviewing two adult women who bore no resemblance to the BernieBro stereotype. Selena Vickers is a Sanders delegate from West Virginia who approached me on the street along the way to the train station. When I asked her about the booing that happened here on Monday, she said it made sense to her because of her background in family counseling. “We were told we had to move toward unity and leave our grievances in the past,” she said. “I knew it wasn’t going to happen without some therapy. When one family member feels they haven’t been heard, it’s got to come to a head somehow.” Booing Hillary Clinton on Monday offered that therapeutic release.

At her delegation’s breakfast on Tuesday morning, Vickers said, several Clinton delegates who were African-American or LGBT people had “shared how hurtful that was, and how disrespectful that felt. There were lots of tears and lots of hugs, on both sides.” They wanted to hear the speakers without interruption, leaving the Sanders forces in a quandary: “How could we have an impactful protest while being respectful to our gay and African-American and disabled brothers and sisters?” So when I met her, Vickers was on the sidewalk holding a sign explaining that Sanders had won all 55 counties in West Virginia, yet only won 18 of the state’s 37 delegates.

Now that the nomination had been decided, Vickers said she would support Clinton, but she was left with the feeling that the process had been unfair. “I think the WikiLeaks documents have left no doubt about that,” she said. Referring to the West Virginia results, she said, “We did everything we were supposed to do, and we were cheated. I’m concerned that Donald Trump is going to be elected, and I’m heartbroken for our country.” Trump or not, she hopes to head an insurgent slate and take power in her local county Democratic committee. “We can’t change things in there,” she told me, pointing back at the Wells Fargo Center. “But maybe we can change them back home.”

Whereas Vickers is brand new to politics, Gretchen Quarterman of Lowndes County, Georgia, is a Democratic Party veteran, probably close to Hillary Clinton’s age. “But I’m a real progressive,” she said. “I’m on the team, and it’s been so very exciting to see all these new people coming in. There’s a young woman in our delegation who is absolutely furious about what just happened, but she’s not giving up. I’m hoping I can get her to run for office in Fulton County,” which includes Atlanta.

There was never any doubt in her mind, Quarterman said, that she would support the Democratic nominee; most of the Georgia delegation was for Clinton. “I really wish our nominee had been Bernie Sanders,” she said. “I really do. He was someone I would follow. He was someone I could believe in.” She gave me a meaningful glance but let that thought go. Then she told me about the Sanders-supporting mayor in suburban Clarkston, Georgia, who just implemented a local law decriminalizing marijuana possession. “On so many issues, it’s cities, counties and states that take the lead,” she said. “The president isn’t the most important person we elect.”

I asked Quarterman about the Monday booing of Clinton, and she sighed. “I completely understand why it happened,” she said. “Many of us thought there would be a floor fight on at least some of the platform issues, and when that didn’t happen there was a lot of frustration.” She told her fellow Georgia delegates to cheer Bernie loudly and chant his name at every opportunity, but not to boo anyone. “And you know what? Some of them booed anyway. That’s America. That’s why it’s a great country. People get to say stuff.”