Feminists boogie At The DNC: The convention is the coming-out party for a bolder — and livelier — pro-choice movement 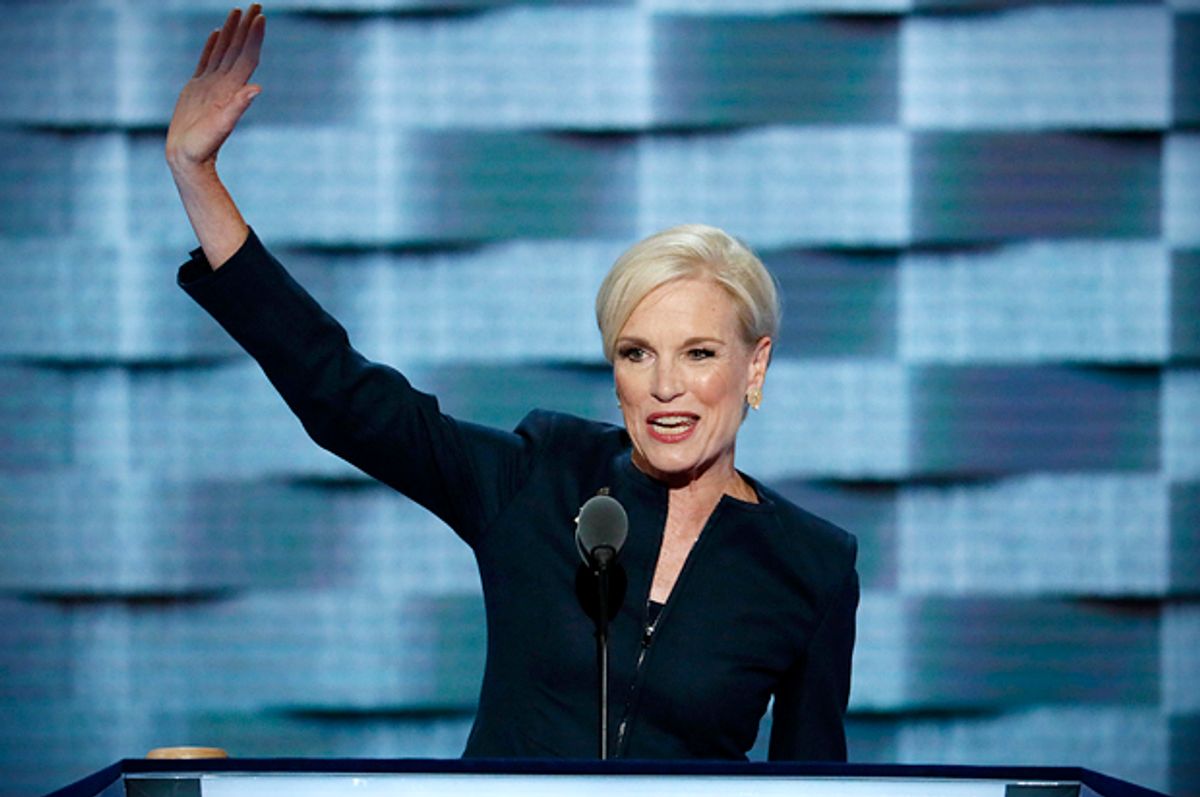 For most of the decade-plus I’ve been covering reproductive rights, pro-choice activism has been tinged with despair. While many other liberal causes, especially gay rights, were gaining ground, the war on women’s health care had been escalating. Republicans had passed hundreds of abortion restrictions around the country. Clinics were closing. Anti-choice forces had turned their sights on contraception access, mounting an attack on insurance coverage of contraception. One of the most outspoken abortion doctors in the country was murdered in cold blood.

But on Tuesday at the Democratic National Convention in Philadelphia, the mood in the pro-choice community was downright jubilant. Last month, the Supreme Court had stood up for abortion rights, overturning a Texas law that was to be the anti-choice template for regulating safe, legal abortion out of existence. A woman — an outspoken feminist who is ardently pro-choice — had been officially nominated by the Democratic party for president. The word "abortion", instead of a euphemism like "choice," was uttered from convention stage.

Pro-choicers were ready to party.

"Look, we just got one of the biggest Supreme Court decisions protecting access to abortion in decades," Erica Sackin, the director of political communications at the Planned Parenthood Action Fund told me on Tuesday night. "It ruled definitively that laws regulating abortion have to be based in science and not politics."

"Not only that," she continued, "we have a woman nominee for president, Hillary Clinton, who is running on a platform that calls to repeal the Hyde amendment, to protect access to abortion, and is one of the most progressive platforms in generations, if not ever."

Sackin's enthusiasm was echoed at a luncheon panel earlier that day, hosted by Cosmopolitan and the Center for Reproductive Rights (CRR), the organization that secured the Supreme Court victory protecting abortion rights in June.

Nancy Northup, the head of CRR, promised that Whole Women's Health v Hellerstedt was just the beginning. The decision, she explained, lays down the groundwork for legal challenges against all manner of abortion restrictions, because there is no precedent showing that laws need to actually protect women's health in order to be justified as health regulations.

Rep. Bonnie Watson Coleman and Sen. Richard Blumenthal were also on the panel, and while they warned that there was still much opposition to be overcome, both Democrats seemed ready to push harder to secure women's access to reproductive health care.

"The notion that we still have to work on this issues is incomprehensible," Coleman lamented, particularly since it means women still have to struggle to get people to realize they are "as intelligent as men".

Still, she argued, the opposition to abortion rights isn't nearly as mighty as the public often thinks it is. Most voters support abortion rights and even, she suggested, many Republican congressmen aren't as vehemently anti-choice as their record would suggest. Only about "40 or so" Republican congressmen are obsessed with the issue, she argued, and the rest are cowed by "bullying."

Blumenthal agreed that the opposition isn't as widespread as anti-choicers would have you believe. He told a story about how, early in his career, he was deluged with letters denouncing his pro-choice positions. But when he started calling the people who sent the letters, about half of them turned out not to be real: The names were made up or the people who "signed" the letters were long dead.

The Planned Parenthood party in Philadelphia on Tuesday night was an almost too-perfect illustration of the contrast between the robust, happy pro-choice movement and the desultory anti-choice movement. The line to get into the party was crush of people, many who waited half an hour to get in, while the anti-choice protesters wilted in the heat, trying in vain to provoke the partygoers with insults.

"Oh you look sooooo nice in your nice dresses," one man yelled through a bullhorn at the female attendees. "But you really should be in white shrouds."

This invective did not seem to bother the admittedly well-dressed attendees.

Inside, the atmosphere was celebratory, as Clinton had just made history in securing her nomination. Cecile Richards, the head of Planned Parenthood, gave an emotional speech praising the Black Lives Matter movement, immigration activists, and the gay rights movement for their successful organizing and their presence at the convention.

"We're all in this together," Richards said, before ceding the stage to hip-hop artist Lizzo, who did a boisterous set celebrating black women, feminism, and female sexuality.

The music underlined the other theme of the week for pro-choicers, which is a growing refusal to apologize for the fact that women have — and like — sex.

Joanna Coles, the editor of Cosmopolitan, who moderated the luncheon panel, was cheerfully blunt on this point. Under her leadership, the magazine has dramatically increased its coverage of reproductive rights and moved away from tip-toeing coverage to unapologetically pro-choice pieces, like their how-to guide on getting an abortion.

Noting that Cosmo is famous for its sexy content and comically detailed stories on various sex acts, Coles said, in her wry British accent, "The flip side of having a really great sex life is sometimes getting pregnant when you don't want to."

It should seem obvious, but in the past, there has been fear of talking too much about how most abortions are the result of recreational sex, out of fear of provoking still widespread anxieties about female sexuality. But this is 2016 and the public is finally coming around to the idea that women are sexual beings, just like men.

This is the new pro-choice movement: Bold, fun, and unafraid to talk about sex in positive terms, instead of acting like it's some unfortunate tragedy inflicted on women. It's an attitude that will serve the movement well as they push for more protections for reproductive health care.