#BLKDNCResistance protesters took over Philadelphia in a several-hour rally against the DNC, racism and capitalism 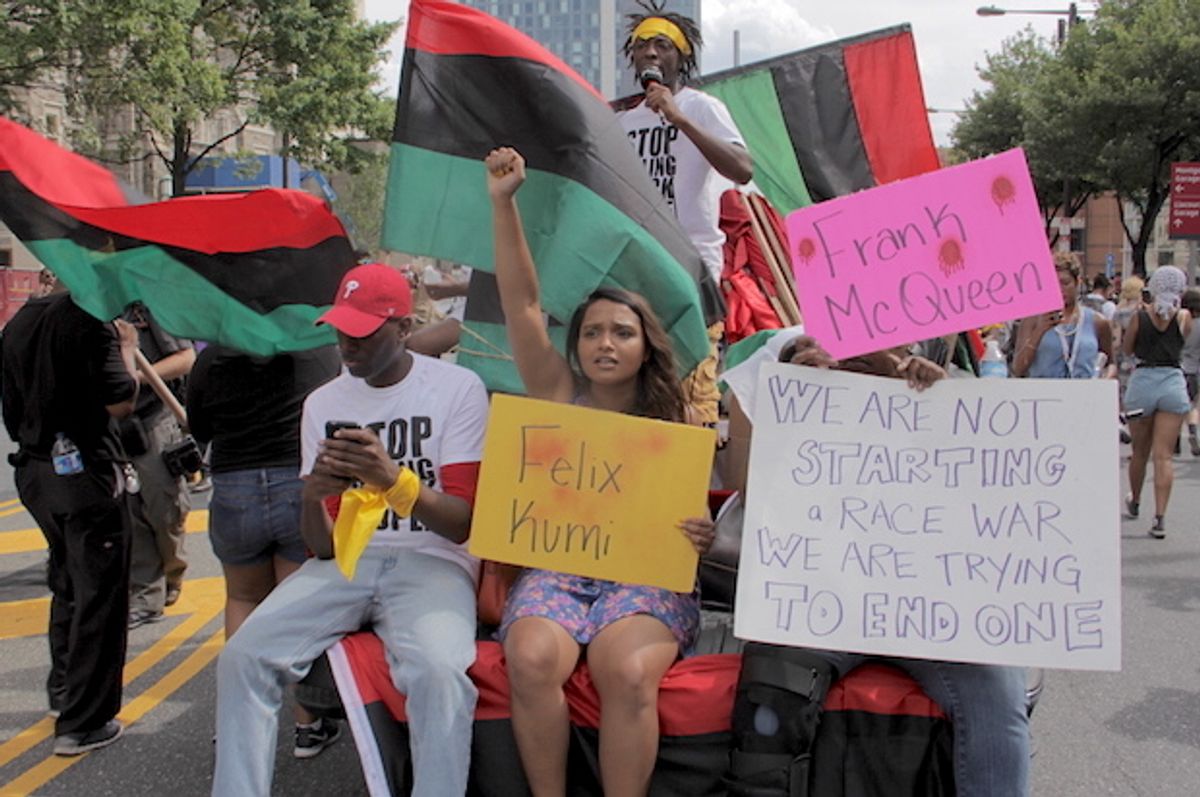 Black Lives Matter activists march through Philadelphia in a demonstration against the DNC, racism and capitalism (Salon/Ben Norton)
--

Black Lives Matter took over downtown Philadelphia on Tuesday in what was one of the largest demonstrations. More than a thousand protesters joined in a several-hour march from the north of the city to the Wells Fargo Center in the south, the site of the DNC.

The Philly Coalition for REAL (Racial, Economic And Legal) Justice led the demonstration, which it called #BLKDNCResistance.

Protesters held signs and banners expressing opposition to the DNC, to systemic racism and to police brutality, with messages such as "End stop and frisk"; "We are not starting a race war; we are trying to end one"; "Stop killing black people"; "We have nothing to lose but our chains!"; “Hillary has blood on her hands” and more.

The police presence was enormous. In the early afternoon, there were approximately 50 officers on bikes with 20 or so police cars behind them following the protesters. By evening, there were at least 30 police cars trailing at the back of the anti-racist, anti-capitalist march.

Alyssa Pagan, a Black Lives Matter activist from the group Don't Shoot Portland, traveled from Oregon to Philadelphia for the DNC protests.

"This country is so profoundly racist; it's so deeply ingrained in our society that it's almost invisiblized," she told Salon.

For decades, she explained, the Democratic Party has stressed that it's less racist than the Republican Party, "and it's not getting us any semblance of justice."

Pagan was wearing a shirt reading "Make socialism great again," with a design satirizing Donald Trump's "Make America great again" slogan. When asked what she meant by this, Pagan replied, "Both of our parties are capitalist parties. And capitalism requires a permanent underclass. And one of the best ways to maintain an underclass is with the trick of racism."

Trine Smith, a local activist from Philadelphia, also joined in the Black Lives Matter march. She called for international and multi-racial solidarity.

"It's a beautiful thing to see other people standing up for the right of African-Americans," Smith said.

"There's nothing but love here," she added. "This is true democracy."

In the march, there were many expressions of solidarity with people in Palestine, Puerto Rico, Haiti and more.

At one point later in the evening when the leaders of the demonstration stopped for a rest, they began chanting "Free, free Palestine! Long live Palestine!"

A contingent of people in the march held signs and banners reading "Dismantle ICE." They were members of Juntos, a local immigrant rights group in Philadelphia.

"It's important to stand in solidarity and know that both of our communities have been oppressed by law enforcement," she added.

Portillo, who said there were also activists at the march from the national migrant justice group Not One More, condemned President Obama for his record-breaking harsh anti-immigration policies.

"Obama right now, we know him as 'the deporter in chief.' He has deported more people than any other president," she stressed. "He has created an incredibly massive deportation machine for people."

Juntos has been working to close one of the three national detention centers that holds refugee and migrant families, which is located in Pennsylvania.

Portillo said immigrants rights activists are calling for a moratorium on deportations and for the dismantling of U.S. Immigration and Customs Enforcement, or ICE, "so this deportation machine does not get handed to the next president."

The protesters marched more than six miles through the city. When they reached Philadelphia's city hall, the Black Lives Matter activists joined forces with a socialist, anti-racist demonstration held by the Workers World Party.

At the combined protest, Workers World Party activists led another anti-Clinton chant: “No Clinton, no KKK, no Wall Street USA!”