From the Mothers of the Movement to Michelle Obama's speech, relive the 10 most memorable moments from the DNC

A video retrospective of the convention's most resonant moments 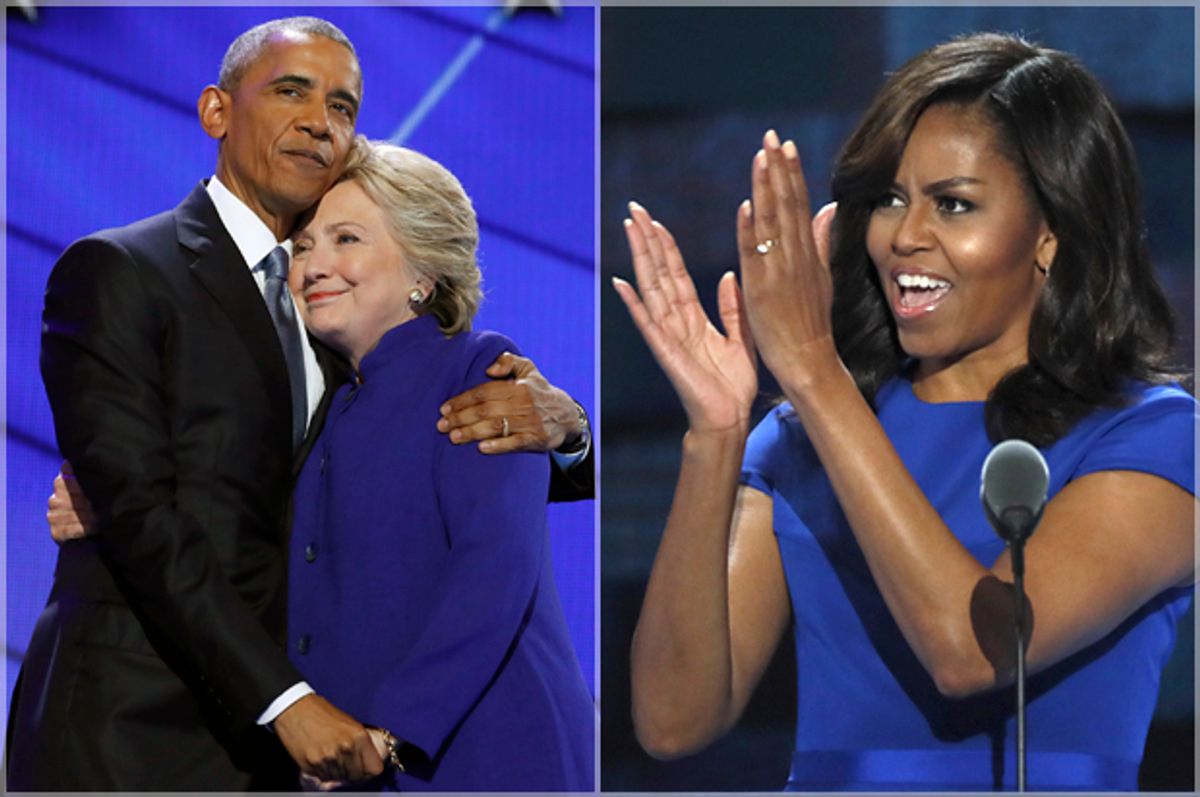 Look back on the most memorable moments from the DNC below:

On Wednesday, the vice president delivered what was perhaps the most cogent critique of GOP nominee Donald Trump presented by any Democrat to date.

"His cynicism is unbounded," Biden said. "His lack of empathy and compassion can be summed up in a phrase I suspect he's most proud of having made famous, 'You're fired!' Think about that."

"Think about everything you learned as a child, no matter where you were raised," he continued. "How can there be pleasure in saying, 'you’re fired'? He’s trying to tell us he cares about the middle class. Give me a break. That’s a bunch of malarkey."

The former congresswoman, who was shot in the head during a 2011 massacre that resulted in five deaths, walked to the DNC podium without assistance to deliver a call for gun control and her endorsement of Hillary Clinton.

"Speaking is difficult for me," Giffords said. "But come January, I want to say these two words: 'Madame President.' "

8. Anti-Clinton protesters take to the streets

Lingering tensions from the contentious Democratic primary cycle were on display in Philadelphia, as some jilted Sanders voters voiced their continuing opposition to Hillary Clinton's candidacy. As of Thursday morning, the protests had yielded 103 citations and 11 arrests.

The actress skewered Trump's Wrestlemania-worthy RNC entrance with an epic walk-out of her own. "You know, I don't usually say this about Donald Trump, but that was over the top," she joked.

Banks continued, "Some of you know me from 'The Hunger Games,' in which I play Effie Trinket ― a cruel, out-of-touch reality TV star who wears insane wigs while delivering long-winded speeches to a violent dystopia. So when I tuned in to Cleveland last week, I was like, 'Uh, hey ― that’s my act!' "

6. Bernie Sanders tears up during his brother's tribute

Democrats abroad delegate Larry Sanders delivered an emotional speech as he cast his vote for his brother during the presidential nomination roll call. Both brothers struggled to hold back tears as Larry Sanders spoke about their late parents.

"I want to read, before this convention, the names of our parents, Eli Sanders and Dorothy Sanders,” he said. “They did not have easy lives, and they died young. They would be immensely proud of their son and his accomplishments. They loved him.”

Chants of "Lies!" and "No more war!" from the audience forced the former CIA director and defense secretary to pause during his speech on Wednesday. Pro-Panetta delegates responded with "USA!" chants.

Panetta's association with controversial aspects of the Obama administration's foreign policy, including drone strikes, made him a contentious choice, among some Democrats, to burnish Clinton's credentials as secretary of state.

4. Barack Obama does what he does best

The president returned to the platform where he first rose to national prominence as an Illinois state senator in 2004 to present his case for Hillary Clinton — and against Donald Trump.

"America, you have vindicated that hope these past eight years," he concluded. "And now I’m ready to pass the baton and do my part as a private citizen. This year, in this election, I’m asking you to join me – to reject cynicism, reject fear, to summon what’s best in us; to elect Hillary Clinton as the next President of the United States, and show the world we still believe in the promise of this great nation."

3. The Mothers of the Movement speak out

On Tuesday, nine women whose unarmed African-American children were killed by police officers or gun violence took the stage to chants of "Black lives matter!"

Below is the full list of the mothers and their children, via Mic:

"This isn't about being politically correct," said Fulton. "This is about saving our children. That's why we're here, tonight, with Hillary Clinton."

The first lady showed why her husband might only be the second-best orator in their family with an emotional address that focused on her daughters and the significance of a woman winning a major party's presidential nomination.

"That is the story of this country, the story that has brought me to this stage tonight, the story of generations of people who felt the lash of bondage, the shame of servitude, the sting of segregation, but who kept on striving and hoping and doing what needed to be done so that today I wake up every morning in a house that was built by slaves," she said.

"And I watch my daughters, two beautiful, intelligent, black young women playing with their dogs on the White House lawn," she continued. "And because of Hillary Clinton, my daughters and all our sons and daughters now take for granted that a woman can be president of the United States."

With the conclusion of the roll call vote on Tuesday, Hillary Clinton officially became the first woman to win the presidential nomination of a major party. "What an incredible honor that you have given me," Clinton said Tuesday in a video message to the delegation. "I can’t believe we just put the biggest crack in that glass ceiling yet."

She continued, "If there are any little girls out there who stayed up late to watch, let me just say: I may become the first woman president, but one of you is next."