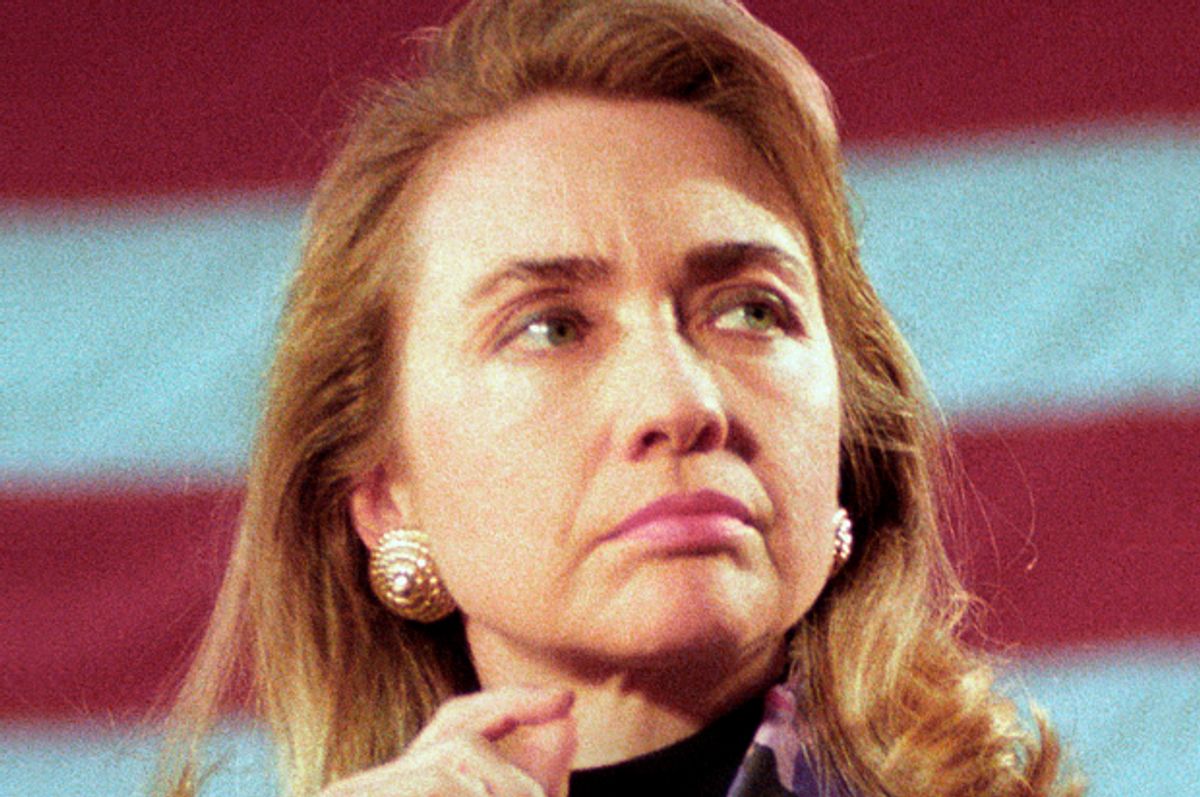 When Hillary Clinton took to the stage on Thursday night to officially begin her run as the Democratic party's candidate for president of the United States, it was a history making moment. And for many of us who've been watching this woman's public life and the unrelenting crap she has endured for over a quarter of a century now, it was also so, so richly satisfying. Because we remember the cookie thing. We remember the headband jokes. We remember the Tammy Wynette-related outrage. So if you'll excuse us, we have some basking in long-awaited glory to do right now.

Back in 1992, when Bill Clinton first began his campaign for president, much of the world didn't know didn't yet know much about him, let alone his high achieving wife. But as the field narrowed, the media focus on the women who would be First Lady grew brighter, and the contrast seemed unprecedented. In one corner, there was the current First Lady Barbara Bush, the white-haired, pearls-wearing grandma-in-chief, a housewife who'd married her teen sweetheart. In the other, there was Hillary. A lawyer. A working mother. A woman who'd been doing advocacy work since her college days. I would tell you to try to imagine how terrifying that must have seemed to people back then but hey, just look at how she still scares the pants off people now!

It didn't take long for a now familiar narrative about Hillary to emerge. Hillary the not cuddly. Hillary the calculating career woman. As Vanity Fair noted at the time, "Republican strategists will be working overtime to remind us that the Arkansas governor's controversial wife is the perfect foil for the First Lady's image as the embodiment of all cardinal virtues." And more outrageously, Clinton didn't seem to shy away from being that foil either.

During the Clinton's first major joint interview, with "60 Minutes," Hillary sat next to her candidate spouse — who was already facing allegations of infidelities — and said, "I'm not sitting here some little woman standing by my man like Tammy Wynette. I'm sitting here because I love him and I respect him." That this woman in a headband could declare her free will and intellectual autonomy, that she would assert her marital loyalty as not blind devotion, earned him immediate outrage and the label "divisive." She even had to make a public apology to country star Tammy Wynette, for the offense of referencing a song. And man, has the fury stuck. As she's campaigned this year, she's still had to face accusations of "insulting" the singer.

She even further incited rage when, on the 1992 campaign trial, she dared to speak of women "who tried to have a career, tried to have an independent life, tried to make a difference." She added, "I suppose I could have stayed home and baked cookies and had teas, but what I decided to do was fulfill my profession, which I entered before my husband was in public life." Nightline soon reported that she was "the new political wife. She has a career, she has opinions. A partner in every way." Inevitably, that identity was swiftly construed as an insult to stay-at-home mothers — a charge she still hears to this day. Then, in the pinnacle of everything ridiculous about 1992 not related to Color Me Badd, Family Circle ran a contest pitting Barbara Bush and Hillary Clinton's cookie recipes against each other. Hillary Clinton, the Yale educated, former staff attorney for the Children's Defense Fund, had been thrust into the arena of public opinion, and the arena had aprons and oven mitts. Time magazine ran a cover story with Hillary's face, asking, "Is she hurting or helping her husband?" and Newsweek asked the exact same goddamn thing.

And now, here we are, 26 years later. In that time, Mrs. Clinton spent eight years as First Lady, another eight years as our senator from New York and four years as Secretary of State. She is now the first female candidate to secure a major party's nomination for president. She has also endured every possible insult one can imagine could be hurled at a woman. She's probably endured every one of them this morning before breakfast. If you were watching on Thursday night, you no doubt noticed that the balloons had barely hit the convention floor before the television pundits began assessing whether she'd come off as "warm" enough in her speech. This is a woman running against Donald Trump, and her "warmth" is in question. She has come so far and she has put up with so much nonsense and now look where she stands. Yet clearly, we still have a lot of work to do here, America. And as of the last election, Family Circle, by the way, still runs the cookie competition.