The saga of Jason Bourne, traumatized hero as emblem of unapologetic white-male violence, turns 14 with a new film 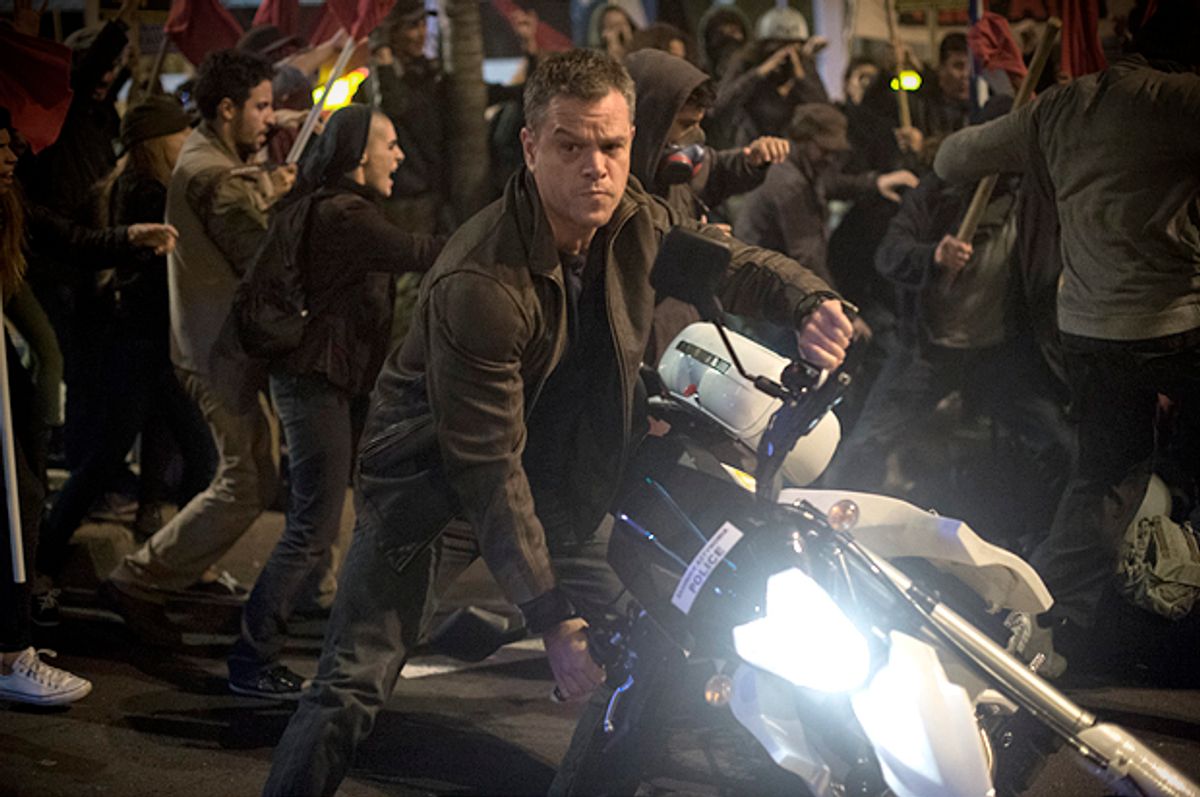 “Look at us,” Jason Bourne says to the man meant to kill him. “Look at what they make you give.”

It’s 2007 and the “they” in question is the Central Intelligence Agency — and, more covertly, a U.S. government so committed to counter-terrorist measures that it recruits and transforms its own citizens into veritable killing machines. As the invincible hero of “The Bourne Ultimatum,” the third installment of the 2002–2007 trilogy, Matt Damon slays, saves and anguishes. When he isn’t kicking ass as an amnesiac spy on the run, he’s dolefully ruminating on the aftermath of the said ass-kicking in his past. “I can see their faces — anyone I ever killed,” he confides to rogue hacker Nicki Parsons (Julia Stiles), who takes his battered hand in her own. Evidently, it isn’t easy ending the lives of others, even those who pose an ostensive threat to national security, survive a five-car collision or mildly resemble Drake.

Nearly a decade later, the flip phones and cybercafés of “Ultimatum” feel almost quaint, as does the notion that a good guy with a gun should carry one in the first place.

“You Know His Name” warn many a black-and-white poster papering city streets and subway tunnels — part of a promotional series for “Jason Bourne,” the latest chapter from director Paul Greengrass debuting today. In one version of the ad, a harsh key light cuts diagonally across Damon’s brow and cheekbone, one of the few spots in which the details of his body are scrutable. The other place, of course, is his cocked SIG pistol, pointed to the left as though aimed at passersby. It’s a riveting image — perhaps due most to the patent lack of wrath in Damon’s expression. His look is grave, unruffled, par for the course. It is the look of violence that has become mundane, officious versus malicious.

It is also a look that comes too close for comfort to current troubles that no marketing agency could have foretold. From the rising homicide rates in Chicago, St. Louis, and Atlanta; to the massacre in Orlando; to the killing of Alton Sterling and Philando Castile; to the slaughter of no less than eight police officers in Dallas and Baton Rouge, this summer is one of the bloodiest in recent U.S. history — rendering Moby’s “Extreme Ways,” the song that has concluded every Bourne film since 2002, chillingly prescient.

So it is no surprise that those who don’t know his name, who haven’t followed the movies, and who don’t give a hoot about Matt Damon’s offhand endorsement of Australia’s ban on assault rifles, see the newest film and its promotional campaign as yet another pro-violent, hyper-masculine affair. The most outspoken (or well-publicized) among the naysayers is Lena Dunham, who recently joined in protest against the guntastic images. When Tami Sagher, co-executive producer of “Girls,” suggested on Twitter that they “get rid of the guns in the Jason Bourne subway ads,” Dunham gamely echoed, “Good idea ... Let’s go!” posting an image of a poster with its pistol peeled off. With more somber reservations, a friend of mine from Baton Rouge shared that whenever she sees the ads in Brooklyn, she imagines a black person beyond its borders, “waiting to be shot.”

So much for the Bourne “Legacy.”

What this disjunction reveals is a serious rift between the onscreen Bourne and growing anxieties over masculinity that convulse beyond the aspect ratio. Does it matter that, after fleeing the agency, Bourne’s character renounces violence in cases that are not self-defense? That he was indoctrinated at a young age by remorseless CIA officials? That he feels he had, and has, “no choice”? What is choice in an age in which practically the same explanation can justify the shooting of an unarmed black man? As my father told me when I was drafting this piece, “Bourne doesn’t kill when he doesn’t have to.” My dad (of course) has a point, but then, who decides what kind of violence is justified, or when it is (ever) mandatory?

The grand irony of Bourne 2016 is that a protagonist meant to represent the psychological ravages of violence has become a public emblem of uncontested (and unapologetic) white masculine power. I happen to think it does matter that in “Ultimatum,” our conflicted protagonist kills not one character through the use of a firearm — and that in the three crucial opportunities he has to shoot, he declines after terse deliberation. It also matters that in “Jason Bourne,” the majority of carnage comes in the form of efficient jiu jitsu and driving skills rather than from the barrel of a gun. Part of the pleasure in watching Bourne is witnessing a single agent out-fight and outwit U.S. “intelligence,” no number of PTSD flashbacks successful in stifling his abilities. Indeed, for as much as Bourne visibly suffers trauma, such trauma surfaces at the opportune time — seconds after he’s swatted off a pack of assailants, knocked out a Berlin anarchist or intrepidly steered himself out of harm's way (body count of motorists advisedly unknown).

It might just be the savviness of the Bourne brand of violence that renders it less off-putting — specifically to fans, such as myself, wary of macho grandstanding yet willing to accept that a ripped Damon clocking brutes isn’t all that bad. And we, of course, are not alone. “Obviously, there’s an incredible amount of violence going on in the world and in the United States right now that’s devastating,” Julia Stiles admitted in an interview, “but this movie’s perspective is not one that glorifies or makes heroic the idea of being violent. In fact, it’s the opposite.”

But is it? For as much as he seeks a peaceful existence, that existence requires constant battle. As Mary T. Hartson argues in her essay “The Bourne Refusal? Changing the Rules of the Game,” “[D]espite Bourne’s apparent paradigm shift toward a kinder, gentler form of masculinity, his behavior on screen remains essentially that of a violent warrior … Not allowed to simply become a feeling, non-violent masculine being … this action hero must continue to use his body in ways he was trained.” In a lot of ways this lack of interior equivocation is what makes “Jason Bourne” the Bournest of them all — he doesn’t think, talk, reflect. He does. And this doing recalls a bygone masculinity to which arguably few men today have recourse.

“This character always feels like he’s running through the world we’re living in,” Damon put it in a recent interview, “that it’s torn from the headlines, and that’s the fun of it.” But when torn from his diegesis in a season where the headlines themselves are as violently spectacular as the 170-car pileup at the new movie’s climax, Bourne starts to feel as much omen as entertainment.

That is, for however out of touch with the films any Twitter-fueled pull-and-peeling may seem, the protest exposes a real collective concern for the effects of toxic masculinity on our cultural psyche. In light of the sheer volume of firearms that show up in the films, Damon’s recent support for a ban of assault weapons has been lambasted by both the right and the left as simple hypocrisy, but seems to me something much more complicated, representative of a broader trend in depictions of manhood across visual media: a “manic masculinity” polarized into hyper-aggression on one end and paralyzing self-doubt on the other. The Damon-Bourne franchise presents a figure at once incredibly competent and emotionally crippled, a mascot for a time in which a masculine identity has no reliable parameters — one in which we fetishize the jacked male body more than ever, all while rates of middle-aged men committing suicide have skyrocketed.

In his 2014 “Who’s the Man? Hollywood Defined Masculinity for Millions,” NPR’s Bob Mondello charts the transition from unquestionably heroic modes of masculinity to more “varied … human and unambiguously authentic” fare — from Apatow bro-pals and Doubtfire dads to, yes, the tormented Jason Bourne. While gesturing to the historical contexts that catalyzed this shift, Mondello ultimately claims that the turn from John Wayne to Iron Man isn’t “such a stretch.” After all, he argues, “They’re icons both, standing tall, fighting for the greater good.”

But how tall are they standing these days? What Mondello’s piece doesn’t consider is the extent to which that “greater good” is more uncertain on both an individual and national scale — an issue that the Bourne films, the newest one especially, negotiate across a subterranean maze of puddles and grime. Amidst rising tensions between left and right, security and privacy, liberty and state control, “Bourne” hosts a banquet of binaries that leaves one just as hungry as when she arrived. Whip pan after whip pan of relentless hunting, and we’re really no closer to the truth of it all.

Which feels, if anything, apropos. American trust in its government has dropped to record lows, with both Trump and Clinton woefully unpopular among a huge swathe of citizens. Despite plummeting unemployment rates in every state and a dramatic expansion of affordable healthcare, as of late 2015, 68 percent of Americans said the country was on the wrong track, the highest such figure in more than two years. To use Mondello’s phrase, when it comes to “who’s the man” — in terms of power, integrity and overall resolve — the fact is that many men (and women) aren’t so sure any more. Redemptive masculine qualities that have historically defined leadership can seem the stuff of yore; sociologist Michael Kimmel has demonstrated that definitions of being a “good man” differ starkly from being a “real” one. Where virtue and legitimacy fail to meet, one has to question the road itself.

In 2003, a year after the release of “The Bourne Identity,” Damon told the Sunday Herald, “I actually hate guns. They freak me out.” At the time, the actor looked more like the dimpled quarterback Charlie Dillon of 1992’s "School Ties" than the chiseled warrior knuckling through this year’s “Jason Bourne.” Like Hugh Jackman before him, Damon’s body mid-forties is preternaturally ripped — a less-rabid “Wolverine,” Tyler Durden with a conscience. The new Bourne launches with a jarring nihilism fitting for the realm of Palahniuk. “It doesn’t matter,” our hero tells Parsons, who, after years of separate hiding, has found him prizefighting on the outskirts of Greece. “All that matters is survival.”

Urging him to join her in exposing yet another state conspiracy, Parsons pleads, “But it does matter.”

And, so, to the fabled birthplace of democracy, they pack up their guns and go.