Trump's overt bigotry could drive Independent whites to the Democratic party 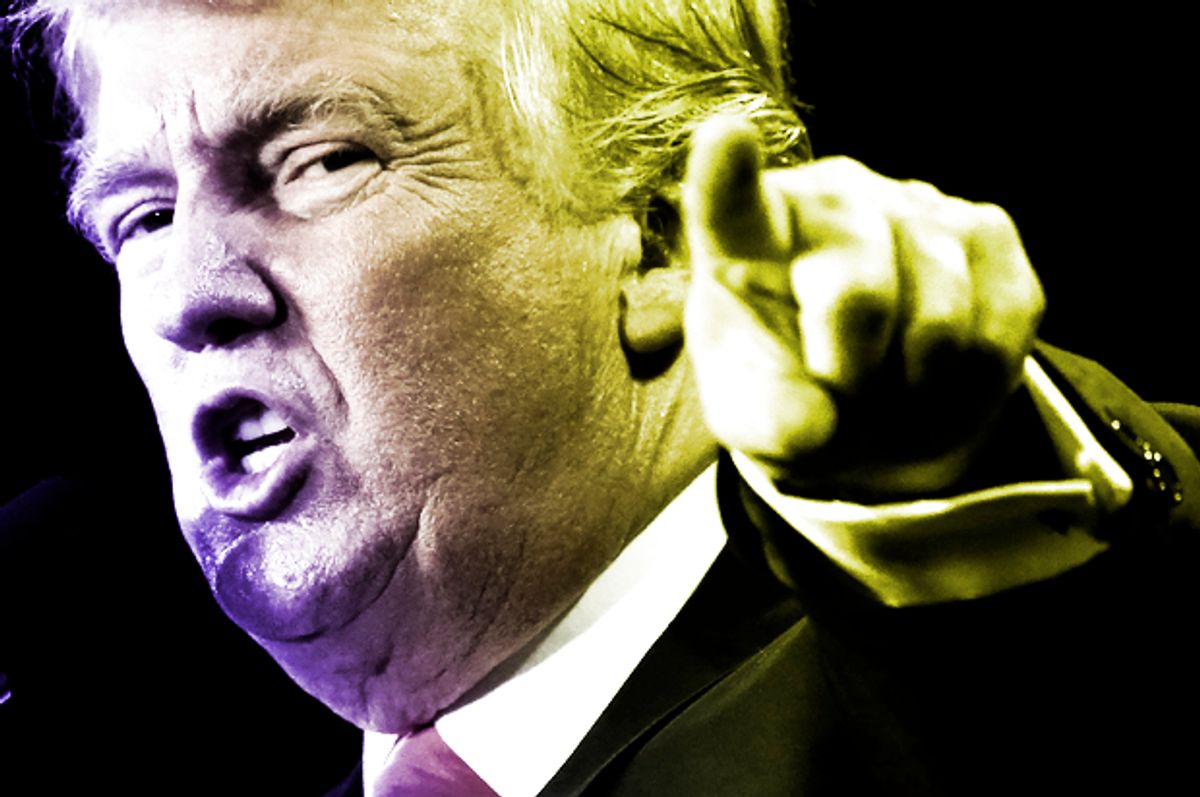 Over the past few weeks, there has been been renewed discussion about Donald Trump’s past racism and the racism that has persisted throughout his campaign. Trump and his father were sued twice by the Department of Justice for refusing to rent apartments to black people. He has said, in private, that he believes, “Laziness is a trait in blacks. It really is; I believe that.” He also publicly called for the execution of the Central Park Five, all of whom were later declared innocent (afterwards, he said they were “no angels.” During his campaign, Trump has regularly engaged in racist rhetoric. He engaged in a racist attack on Judge Gonzalo Curiel, the judge overseeing the lawsuit against Trump University. Trump has retweeted racists and accounts connected to the “white genocide” hashtag (a white supremacist hashtag). He has frequently referred to Elizabeth Warren as “Pocahontas.”

I’ve been noting that this story has powerful possibilities for months, and yet many have dismissed the idea that Trump’s racism will do anything other than help him among whites. However, my analysis of ANES 2016 suggests that Trump’s racism may be extreme enough to alienate not just voters of color, but also moderate whites.

Many commentators have correctly noted that Trump’s racist comments hurt him among people of color. Latinos and Asian Americans have widely rejected Trump, and in one Ohio poll, Trump had 0% support among African-Americans. Among harder-to-poll Spanish-speaking Latinos, Trump’s support is less than 11 percent. Trump may well win an even smaller share of the non-white vote than Republicans normally win (Romney won just 17% of the non-white vote).

However, there are several reasons to believe that some whites who would happily cast a vote for a Reagan, Romney or McCain would hesitate to vote for Trump. Why? Because Americans are very aware of more glaring forms of racism, like racial stereotyping. As legal scholar Ian Haney Lopez argues, the Republicans have had electoral success by using dog-whistles, rather than explicit racial appeals. Codewords like “welfare queens” obscure the realities of race that are being discussed, leaving politicians with plausible deniability. This strategy has been used mostly by the right, though Democrats have also used it (i.e. the famous “superpredators” comment).

That is, whites are about 15 to 20 points more likely to agree with the racial resentment questions than the stereotyping questions.

While a large share of Americans embrace racial resentment and other less explicit forms of racism, the overt racism that Trump has dabbled in may be more alienating. To examine this question, I turned to the American National Election Studies (ANES) 2016 pilot survey, which asked respondents about their vote intention in a hypothetical head-to-head general election contest between Hillary Clinton and Donald Trump. There are several reasons to hesitate about drawing firm conclusions from this data, starting with the fact that the survey was conducted in January, well before either candidate had secured their party’s nomination. Additionally, only 487 survey respondents were asked the head-to-head match-up question (other respondents were given other hypothetical match-ups, because the nominee was uncertain). Of those, 45% expressed the intent to vote for Clinton, 35% preferred Trump, 11% preferred a different (unnamed) candidate and 9% said they probably would not vote. More current polling data show a closer contest, likely because partisans have come around to their party’s nominee. Ideally, we would have experimental evidence in which respondents were presented with  Trump’s statements or actions and asked whether they would support him. However, such studies will likely only come after the election. While the results are significant, there is a good deal of uncertainty regarding the magnitude of the effect. However, the results do suggest that Trump’s racism could alienate some white and racially liberal Independents. It’s also likely he will be hurt more when his past racism is more widely discussed in the media.

Americans Are Increasingly Polarized on Race

In her book on the Willie Horton ad, political scientist Tali Mendelberg argues that when the implicit racism of the Willie Horton ad was brought to light, the ad was ineffective. In a recent study, Tatishe M. Nteta, Rebecca Lis and Melinda R. Tarsi show viewers an ad Mitt Romney ran calling for a work requirement to be added to welfare. Respondents are then asked to read an op-ed about the ad. One op-ed argued that the ad had racist undertones, the other did not. They find that the op-ed calling the ad racist leads both white Democrats and white Republicans to perceive the ad as racist and lead to decreased support for Romney.

However, there is a more pessimistic case to be made, coming from the work of political scientists Nicholas Valentino, Fabian Neuner and Matthew Vandenbroek. Their work has not yet been published, but has been through a peer-review process (and was previously discussed in WonkBlog). They find that explicit appeals are no less effective than implicit appeals. As political scientist Michael Tesler had shown, the parties are increasingly polarized on the issues of racism. Racially liberal Americans have sorted into the Democratic Party, while racially conservative whites are in the GOP. Because the parties are increasingly polarized, politicians can take more extreme positions on the persistence of racism and policies related to race. In addition, the authors argue that the election of Obama has lead many whites to feel like they are a disadvantaged group (see my work on how these feelings increase the likelihood of supporting Trump).

Valentino, Neuner and Vandenbroek showed groups two different articles about Obamacare and then measured respondents views on the Affordable Care Act and other public policy related questions. One version of the op-ed had subtle racial cues (discussing how the Affordable Care Act affected “poor inner-city” people versus “suburbanites”). The other more explicitly discussed race, and included language about how black people receive handouts (a control group read a story about preparations for an upcoming Olympic Games). The charts below show the results: the difference in predicted support for healthcare reform wasn’t strongly affected by whether the racial cue was implicit or explicit. Therefore, it may not matter that Trump has lifted the guise of from dog-whistles — racially resentful whites simply won’t care. (They may simply dismiss concerns about racism as “political correctness.”) It’s impossible to know for sure whether Trump’s racist past will alienate white voters. However, on net, the evidence seems to suggest it will. The sort of outright discrimination Trump has practiced is alienating to Americans, who see segregation as a great evil in American history. While other forms of racism are (worryingly) acceptable to many Americans, housing discrimination and outright stereotyping are looked upon with disgust.

Many whites will disapprove of Trump’s refusal to rent apartments to black people. According to General Social Survey data compiled by WonkBlog, 70 percent of Americans agree that a homeowner “cannot refuse to sell to someone because of their race or color” (28 percent say they should be allowed to). When the question was phased out in 1996, only 12 percent of whites agreed that “white people have a right to keep blacks out of their neighborhoods if they want to, and blacks should respect that” (86 percent disagree). According to YouGov data, 71 percent of Americans (and 61 percent of Republicans) believe it is inappropriate to retweet white supremacists.

It’s true that the narratives campaigns put forward and candidate’s life stories don’t tend to dramatically shift the outcomes of presidential races. Factors like economic growth and campaign effects are far more important. Though pundits tend to focus on narratives, races are going to be decided by factors that don’t get huge amounts of coverage: how well a campaign mobilizes and targets voters and structural factors like the economy. However, in the past, parties tended to put forward competent candidates, so any possible effect would cancel out. In this election, the Republican Party has nominated an open racist who has courted white supremacists. Trump’s style of racism will further alienate people of color from the Republican Party (and since partisan ID tends to be sticky, it may take decades for them to return). It may even push white Independents to the Democratic side, creating a coalition of racially liberal and moderate whites and people of color that will be a powerful force in national elections.

However, these stories have yet to garner a large amount of coverage. The DOJ investigation lay dormant for months before it was briefly highlighted when Clinton announced that Tim Kaine would be her vice president (Kaine specialized in fair housing as a lawyer, in contrast to Trump). It remains to be seen what the effect of more coverage will be, but so far coverage has focused on bad things he has said, rather than done. It’s time for a real conversation about Trump’s racism.